HIV Patients as Seen through Hearts of TLC Translators

But truly the Emaswati who work for The Luke Commission have become the heart and soul of the ministry. Therefore, this update will highlight their views and stories about HIV/AIDS patients.

Keep in mind, please, who these people are. 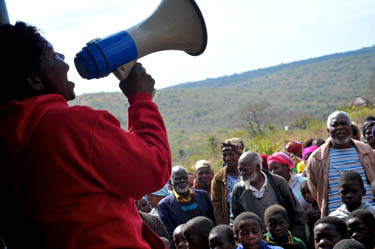 Dumi uses TLC megaphone to give HIV-testing instructions to a gathering clinic crowd.

They are Emaswati who labor alongside Harry and Echo day after day. They protect the Americans from cultural mistakes, they help us with the nitty-gritty of life in southern Africa. Most are in their 20s or 30s, many have children, a few have spouses, all struggle financially but laugh rather than cry through the trials of life.

All have accepted Jesus Christ as their Savior and reckon it a privilege to be His handmaidens and fellow servants.

TLC translators understand the fears that plague HIV-positive patients, because many wrestle with a similar diagnosis.

They know the importance of testing, getting blood drawn to determine CD4 counts, and then daily taking anti-retroviral drugs. These medications may be difficult to obtain every month and have undesirable side effects but are absolutely necessary to prolong lives.

And through it all, the translators testify that The Luke Commission cares and intercedes.

Now to their recent stories: 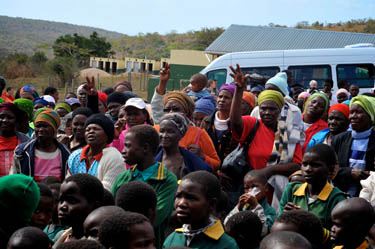 Women raise their hands to ask the TLC team questions about HIV/AIDS. This would have never happened even a year ago. The new TLC passenger vehicle and typical school outhouses form the background.

“My eyes and Echo’s eyes can see 400 people, but God showed us one family late at night when we thought we were finished,” said team leader SIPHO.

A woman and her two children tested positive for HIV and then disappeared in the crowds. “When God showed Echo the lady was missing,” Sipho remembered, she ran to the community policeman who knew the woman and where she lived.

Sipho and Echo climbed into the police truck – the back of a pickup with bars. “It was very dark with no moon and no road. The driver did not care about all the bumps. We bounced and bounced along, and Echo tried to take a nap,” Sipho laughed.

Arriving at the Liswati homestead, Sipho noted, “Something in my heart was touched by that place. We heard a the whole family coughing inside. Finally the mother came out and said she left the clinic, because one of the community leaders took the children home who had tested positive.

With Sipho interpreting, Echo checked each family member. “Everyone was so sick,” Sipho said. “We used a torch (flashlight), and then it lost its light.”

Finally convinced they would receive medical help, the family piled into the police vehicle with Sipho and Echo.

That mom later told PHUMSILE, another translator: “TLC plucked us out of the hand of death.” 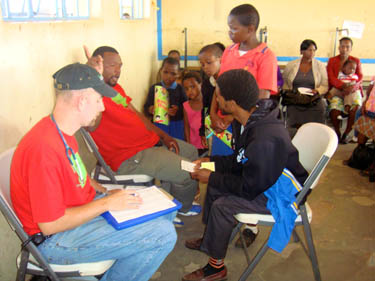 Harry, with Sipho’s translating, diagnoses the ailment of this father and mother and their children at a clinic out in the Liswati bush.

Patients gain strength and vigor after only one month on ARVs, explains Phumsile as she counsel HIV-positive patients.

One man was so ill he asked Echo for a pill to let him die, Phumsile recalls. “He said, ‘I want to die now, now, now.’”

Harry and Echo took him to the hospital, interceded on his behalf, and “now he is well and fresh,” said Phumsile. “I asked him if he still wants to die. He said ‘no, no, no.’”

DUMSILE, also a TLC-trained counselor, thinks “the Emaswati are waking up. They are learning couples must be tested, not just one in the family.”

A man with four wives agreed to test, because he was coughing and had night sweats. “I told him to go home and bring back all his wives.”

He did, Dumsile notes, still rather surprised herself. “All tested positive but are not sick yet. We can help them.”

Some 80% of those who have the Human Immunodeficiency Virus (HIV) also test positive for Tuberculosis. The Luke Commission has worked hard to link all the pieces necessary for patients to start medications for both diseases at the same time.

“Only God could have broken down the walls that said one disease had to be treated successfully before the other could be addressed,” said Dr. Harry. “It’s a huge breakthrough.” 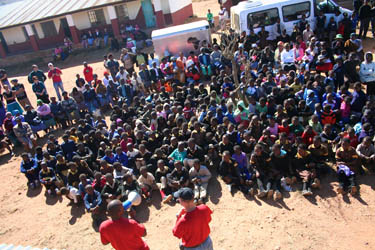 This overhead view of a TLC clinic shows school children listening to Harry’s instructions about the doctoring and medicine to come, as well as telling them Jesus wants a relationship with each one. Parents and grandparents are out of the picture to your right. One of TLC’s new vehicles and trailers is parked in the background.

Logistics can slow down the urgent, however. Translator GUGU repeatedly called one woman who had tested positive both for HIV and tuberculosis.

“She did not like what the TB tablets did to her body, so she would not get her blood drawn again,” Gugu said.

“I told her TLC would pay for her transport to Manzini. She refused. Then today she called on Echo’s cell phone and said her skin was falling off. She will be here tomorrow,” Gugu declared determinedly.

THULANI remembers when “we would sit and count tablets on days we were not in the bush. Now there is no time for that. The really sick patients come to the house. We must be very personal with them.” 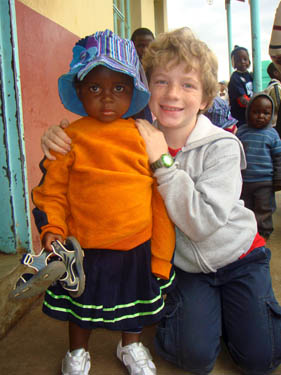 Luke VanderWal poses with a little Liswati girl he has just outfitted with new clothes and shoes.

Getting personal is what translator Thulani does best. He prays with patients at clinics before they receive a diagnosis from Harry or Echo or short-term doctors. “I emphasize the relationship between them and Jesus.”

A newer translator JABU works in the TB department sometimes and in the HIV department other times.

Jabu remembers counseling a lady “who was vomiting and weak. Her husband had died of AIDS. I told her she was HIV-positive and she cried. She had shingles all over her body.”

Continued Jabu, “I tried to calm her down, and Harry gave her some medicine. She phoned two days later and said her shingles were gone. She thanked TLC for helping her.”

But realizing the process has just begun, Jabu urged the lady to come to the VanderWal’s house in Manzini for followup care.

Jabu tells many stories that stir the heart. One old lady was rearing her grandchildren since her daughter “was late,” meaning she had died.

The empty stares and lethargy of the 4-year-old and 2-year-old told the sad tale before tests verified the AIDS diagnosis.

Then the unpredictable happened, as it so often does in Eswatini… The grandmother smiled and clapped her hands. Now she understood why her grandchild had suffered from open wounds and diarrhea ever since birth.

“The gogo was too happy to know she was not doing anything wrong,” Jabu said. “She was trying to care for the children. I told her if she did not have gloves, she should put plastic bags on her hands.”

“Happy” to discover a death sentence? It’s hard to imagine, yet Emaswati are realizing that it’s better to know than not to know…

BABHI talks of a mother who took her 5-year-old son, a pitiful sight with sores all over his body, to a nearby clinic and then to a Liswati hospital. Both centers refused to start her son on ARVs because of transportation technicalities and distance to her homestead.

“I did not have the money to go to the hospital every month, so they did not want to start my son on the medicines,” the woman told Babhi.

The boy’s CD4 count was 5! Consider his condition when a healthy body’s CD4 count ranges from 800 to 1200. A person who tests below 350 in Eswatini is eligible for ARVs. 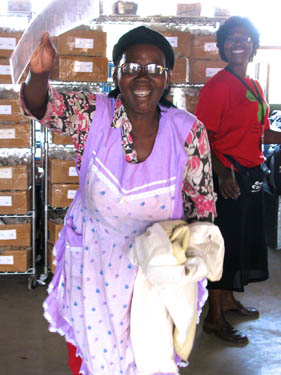 Seeing is believing, and seeing with new eyeglasses from TLC vision department is pure delight, as seen on this Liswati lady’s expression. Staff member Phindy shares her joy.

PHINDILE and SIMPHIWE counsel and help HIV-positive patients, too, when they are not supervising TLC vision center.

“I know how much I needed eyeglasses in school. Sometimes I cannot find a match, but I keep looking,” said Cheese.

Recently, a 2nd grade girl, blind in one eye and seeing only blurry shadows in the other eye, waited shyly in Cheese’s and Phindile’s eyeglass line.

“We will send her to Dr. Pons for cataract surgery. I’m glad we didn’t miss her.”

Phindile admits that “some of the old people start shouting when it gets dark. They shouldn’t complain when the glasses are free. But sometimes they just get tired of waiting,” reasoned Phindile.

“But when they can suddenly see words on a page, they praise the Lord. Many tell me now they can read the Bible and not just listen to someone else talk about God,” Phindile said. “I love my job!”

An attitude of love – first for Jesus and then for their own people in the rural communities – that’s what drives The Luke Commission translators. We could not serve the Emaswati without them.

Appreciative of you, them, and Him,