In honor of mothers everywhere, we offer these stories from Eswatini.

BUSISIWE waits quietly in line, swaying back and forth to soothe her fussy daughter wrapped in a tattered towel. The young mother wants a new outfit for her baby. All mothers like their little girls to look pretty. 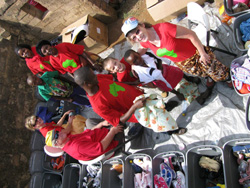 This view Echo took from above shows typical clothes’ giveaway. 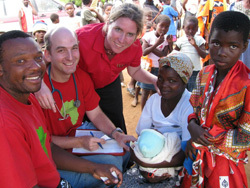 Harry and Echo treat a mother and her two children. Sipho (left) translates.

When Busisiwe enters the shed where Luke Commission team members are dressing children in bright clothes, she painfully sits on a makeshift bench. That’s 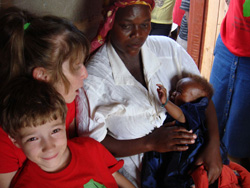 when we noticed that Busisiwe’s face is marred with open sores. She lowers her eyes but not before we share smiles.

Seeing sick, obviously HIV-positive Emaswati no longer shocks us, but when we unwrap the baby our smiles freeze. The 4-month-old’s skin is raw and oozing. No wonder she whimpers.

From behind Echo hands me a beautiful blue satin gown and whispers: “This will be her burial dress.”

We carefully cloth Busisiwe’s precious daughter, pray with her, and thank God for a mother’s 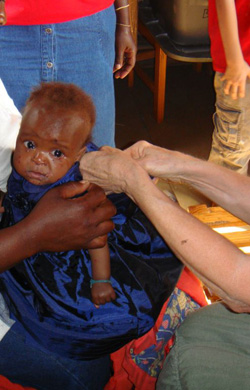 love – a picture of our Savior’s love.

NOMVULA is a city hospital nurse who gregariously supports The Luke Commission’s treatment of needy patients in remote areas of her country.

In 2003, Nomvula felt “always tired” and reluctantly had her blood tested. Sure enough she was HIV positive. Now she takes anti-retroviral drugs regularly. Her husband left her, but her happiness and faith in Jesus have not left her.

“I feel so lucky,” Nomvula said. “Many of my friends have already died.”

In fact, 50 per cent of Eswatini’s nurses have passed away from AIDS-related diseases. Countless others have left the country to work elsewhere.

Though thin and often ill, Nomvula declared: “I have two children I want to finish raising. I’m a Christian and know I’m saved. Death is not the end for me.”

THABSILE walked 5 kilometers – almost 3 miles – with her four children to a Luke Commission clinic. Jump ahead 10 hours during which Thabsile’s family has been treated individually by Harry.

“One of the children needed antibiotics for an infection,” Harry noted. “All of them had scabies, but we can give them soap and lotion to cure that. The mother probably has a STD, which we can treat.”

Also, the children have been fitted with new shoes and clothes, and the whole family has watched a movie about Jesus dying on the cross just for them. Thabsile received a SiSwati Bible, the first ever in her homestead. 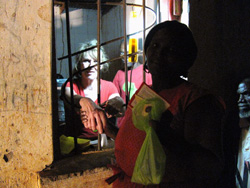 Darkness has fallen, but this mother
gratefully waits for her bag of
medications.

Now Thabsile is standing in the pharmacy line waiting to get her prescription card filled.

It’s dark. The children are hungry and tired. So certainly is Thabsile. However, she gratefully accepts 5 bags of medications with each of their names on the front, plus a blanket made with love by another mother across the ocean in America.

Time to walk home. Thabsile ties her newborn baby on her 6-year-old daughter’s back. Then she leans forward and straps her toddler on her own back. She straightens with her heavy load, takes the hand of her fourth small child, and starts her journey – no husband’s help, no transport, not even a flashlight.

We offer her a drink of water. She shares with her children who are still awake, and the five slowly disappear into the moonless night. 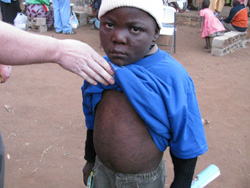 Echo said this boy had the worst case of scabies she’s seen. He probably has been suffering for years. He had no parents and was afraid to seek help. Today he’s better! 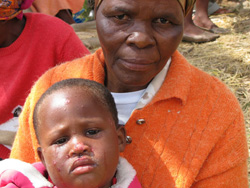 A grandmother waits to have her suffering grandchild treated.

Are these women not unheralded heroes? Here’s one more story in honor of mothers here and in America.

Many grandmothers, such as this Gogo,
raise their grandchildren.

PHEPHILE has tended her two rambunctious grandsons all day at the clinic. The boys are “double orphans,” the name Emaswati give to children whose both parents have died. They are their grandmother’s sons now.

At times the boys appear to run circles around Phephile, but she demands obedience and usually earns it.

Phephile needs eyeglasses to keep up with her grandsons, and she will wait no matter how many others are in queue before her.

At last it’s Phephile’s turn. The new Luke Commission autorefractor reads her eyes and sends bar codes to the laptop computer of eyeglasses in TLC inventory which will suit her. 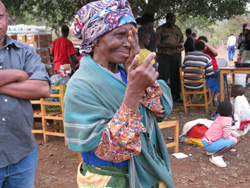 Halleluja! Before the day is over, this
Gogo will be able to see.

The result: five pairs from which to choose! Phephile’s smile crinkles her elderly eyes to slits. On the second try, she jumps up exclaiming in Siwati, “I can see.”

“Now my grandsons will have warm food, and I will keep my eyes on them so they don’t find trouble,” Phephile said.

As we tell our mothers that we love and appreciate them this weekend, maybe we can remember Busiswe, Nomvula, Thabsile, and Phephile.

The sacrificial love of these mothers shadows the greatest sacrifice of all – Jesus’ very life for His people everywhere. Happy Mother’s Day.

Grateful for your prayers and devotion,

Janet Tuinstra in Eswatini with Harry and Echo VanderWal, their boys and The Luke Commission team

Editor’s Note: Names have been changed to protect identities.