TLC and PET Partner to “Able” the Disabled

Sometimes what is not speaks more than what is. That’s the case with PET carts in Eswatini.

Personal Energy Transportation carts lift those with physical disabilities off the ground and give them mobility and usefulness. 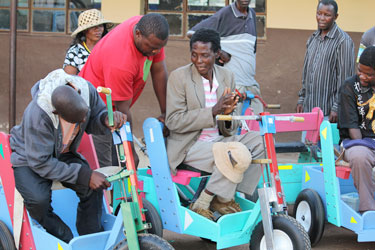 PET International director Von Driggs and his wife Linda recently flew to Eswatini to participate in a Luke Commission clinic and see firsthand to whom and how the carts are dispensed.

“The Luke Commission has become our hands and feet to pass the carts along,” says Von.

In the past year, TLC assessed disabilities and gave away 200 “alternative wheelchairs” in Eswatini. PET delivers carts to 100 countries, Von notes.

“He chose to do site visits with The Luke Commission. That’s quite an honor,” comments Dr. Harry VanderWal. 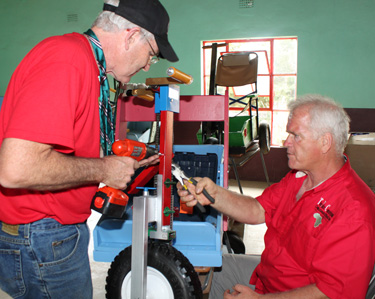 Stories of those at the Ekutsimleni clinic who receive freedom of movement will brighten and inspire the lives of those who jump out of bed every morning, all by themselves, and walk throughout their day…

Hezekiah Dlamini suffered a spinal cord injury 20 years ago. Now 48 years and the father of five, he received a PET cart in 2010 when TLC came to his remote area. 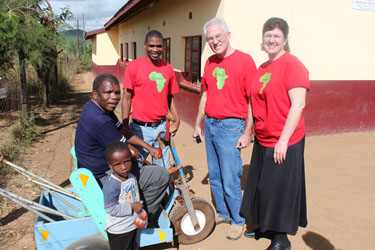 Hezekiah Dlamini traveled 5 kilometers with his son on this cart to thank PET international director Von Driggs and his wife Linda for the PET cart he received at a Luke Commission clinic last year. TLC staff member Thulani translates.

Harry tells recipients that the chairs come from Jesus. “People who love Jesus in the United States sent them to us,” Harry emphasizes. 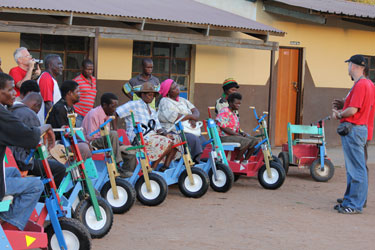 Dr. Harry VanderWal (far right) talks to new PET recipients about how their carts come free from donors in the United States who love Jesus and want to express His love to people they never meet this side of heaven.

Hezekiah rides great distances, propelling the cart with his arms. He travels to farms and buys potatoes to sell.

His PET cart is rusted, the paint is chipped, and the chain is loose. He has no extra room in his hut, so his cart sits outside under a torn sail (tarp). 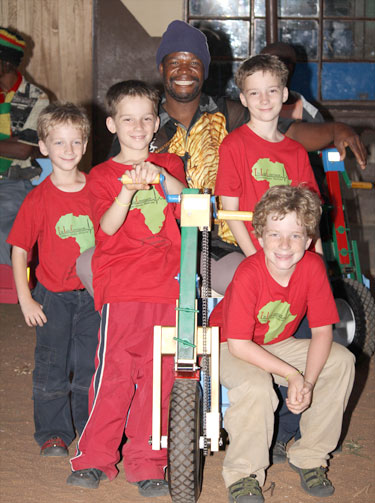 But with crutches and potatoes in the back portion on his cart, Hezekiah is mobile and able to support his family. 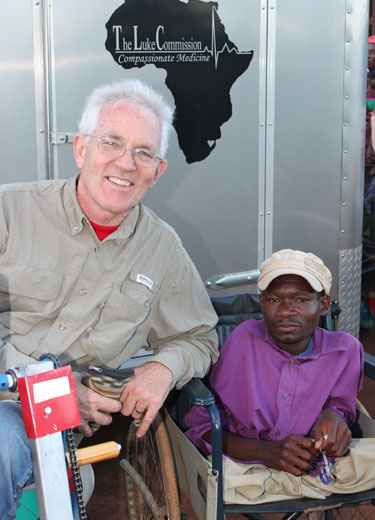 This young man afflicted with polio as a child had no legs and a deformed back. But he can use his arms to propel the “crank” cart wherever he wants to go. Von Driggs represents all those PET volunteers in the United States who donate their time and money to make and ship these carts for handicapped people to more than 100 struggling countries.

Four years ago, Cebsile Mohale had a difficult childbirth, resulting in an operation that left her unable to walk. She probably needs physical therapy, Echo says, but that’s not a Eswatini possibility.

Cebsile is a 23-year-old hairdresser who wheeled down a dusty road 3 kilometers to say “thank you” for the PET cart she received at last year’s TLC clinic.

A dignified elderly lady, decked out in a red hat and jacket, gestures to show that her brake is broken. Von offers to fix it. The smile on Anna Dlamini’s face radiates beauty and relief. 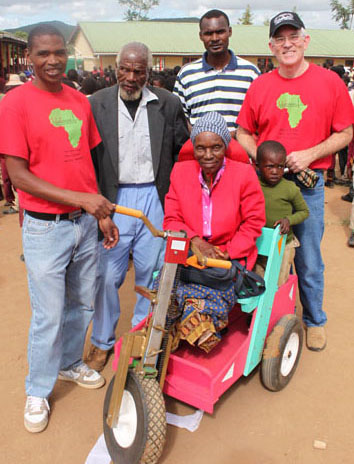 Rodgers Mamba (center), member of Parliament and leader in this community, talks with PET director Von Driggs and Anna Dlamini who has not walked in four years because of diabetes. Now Anna moves from here to there and everywhere in her bush wheelchair. Thulani and the lady’s husband look on.

She “drives” her cart 10 kilometers every day, over rivers and up hills. “I keep inside. I clean it,” Anna declared. At age 60, she has not walked for four years. Diabetes is the culprit.

Mncenekelwa Hlongwane looks much younger than his 45 years, except for his useless legs. Three years ago, tuberculosis of the bone brought him to his knees. 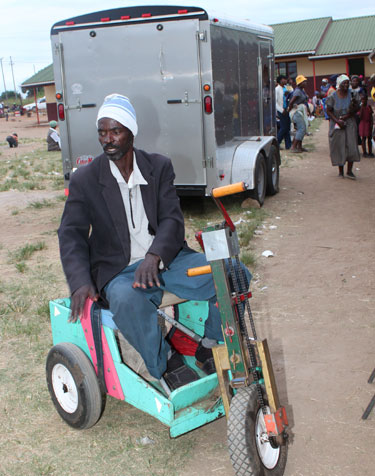 Hlongwane Mncenekelwa wore his cart out in two years. In exchange for a new cart, he agrees to help others in his bush community make minor repairs on their carts.

Mncenekelwa travels 15 kilometers a day buying and selling vegetables and building iron triangles to hold cooking pots over a fire. He earns R25 to R50 ($4 to $7) for his iron work. He also supervises small children at a community care center.

In less than two years, he has worn two sets of solid-core, rubber tires and has repaired the brake numerous times. When we meet him again, he has a tool in his hand, ready to tighten the chain.

Echo and Von decide he deserves a new PET cart. “Maybe in exchange for a new cart we can make him responsible for performing minor repairs on carts for others in his community,” reasons Echo. 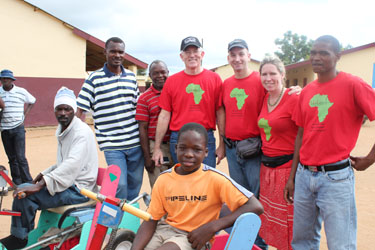 Emaswati, young and old and in between, gain mobility in the bush when The Luke Commission fits them with PET carts. From left rear are community leaders Rodgers Mamba, community headman Reuben Nxumalo, Von Driggs, TLC directors Harry and Echo VanderWal, and TLC staff members Thulani.

She talks to Rodgers Mamba, community leader and Member of Parliament, and Reuben Nxumalo, the headman of the community, who stays on site with TLC all day and long into the night. Rogers and Reuben speak with Mncenekelwa, who agrees with a shy smile of wholesome joy to use the parts from his old cart to help fellow Emaswati.

“Even today he is teaching small things to other people with carts,” Echo notices a few hours later. “He will be accountable to Rodgers and Reuben, and that’s good.”

“Most of his life is centered around this cart,” PET director Von observes. “It’s exciting to come see people gain mobility.” 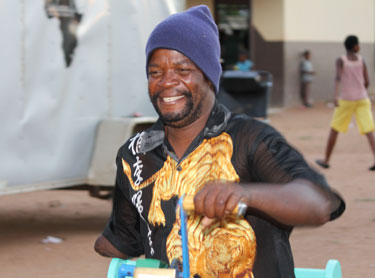 Jabulani, jabulani – happy, happy – is this man on the move in his new personal energy transportation cart.

Thirteen year old Siphoskhe Masimula can move faster on his hands and knees than most of us can walk. Still, his birth deformity saddles him with a distinct disadvantage in a country where few people have cars and most live out in the bush, miles from stores and assistance.

Siphoskhe moves down the dirt road to school 5 kilometers one way every week day. When he gets to school, no handicap ramps await him. But he scoots out of his cart and climbs tall steps the old way, just glad to be “schooling” – a Liswati term for which parents and caregivers pay dearly. 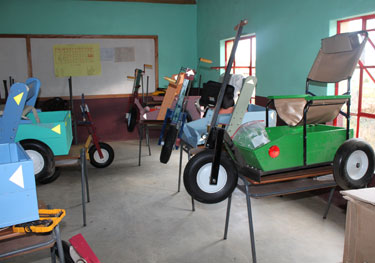 PET carts are assembled for the specific needs of handicapped Emaswati. Some “drive” them with their arms, and others less hardy are pulled, as in a wagon.

That day seven more PET carts are assembled and distributed at dusk.

Six are the crank carts, those the disabled move with their arms, and one is a pull cart, much like a wagon with a comfortable, elevated chair. 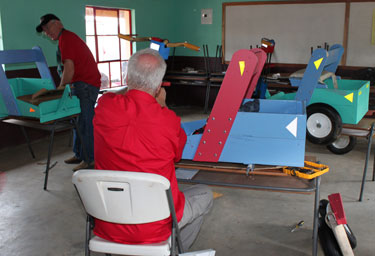 The pull cart is presented ceremoniously to a woman who arrives at the clinic on a mattress in a “bakkie.” TLC staff lifts her out of the pickup.

Immediately, something happens which we have never seen in the Liswati bush. Her husband gently puts her arm around his wife, as she sits beaming in her new chair. 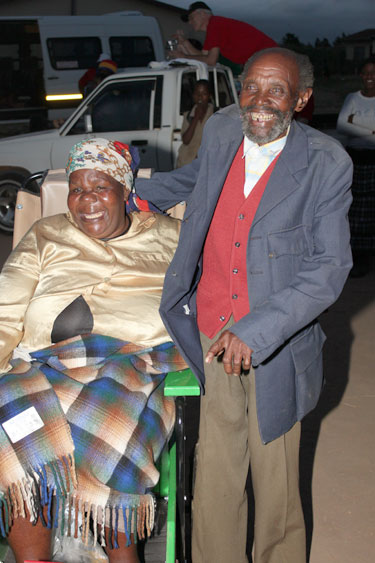 This husband puts his arm around his wife when he sees how pleased she is.

Liswati husbands and wives do not show any affection in public. In fact, most husbands do not sit with their wives at the clinics nor openly communicate during clinic day.

The Americans and then the Emaswati laugh and cheer, when the man hugs his wife. The husband responds dramatically by pulling his wife in her new cart, dancing and waving his arms. 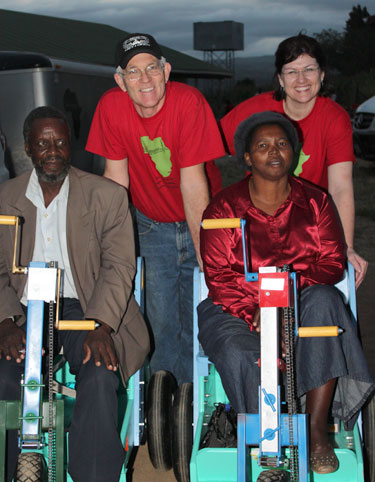 It’s getting dark in the bush, but light has sprung into the lives of these two Emaswati who will “drive” away all by themselves with mobility and independence. Von and Linda Driggs share their joy.

“The pull carts do not get as much publicity as the crank carts,” Echo notes. “But they are equally valuable for those who are not strong enough to maneuver the carts themselves.”

In the U.S., independent centers in 20 locations buy materials and build the PET carts. Each costs about $250. 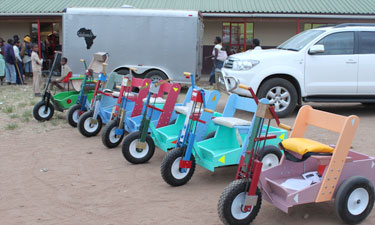 Waiting for their new owners at a February 2011 Luke Commission rural clinic are these specially assembled PET carts with all-rubber tires, ready for dirt roads and paths over mountains and through the bush…

“Volunteers do everything,” Von explains. “They raise the money and then donate their time to make the carts.”

This year PET International hopes to ship 5,000 carts to the disabled needy around the world. 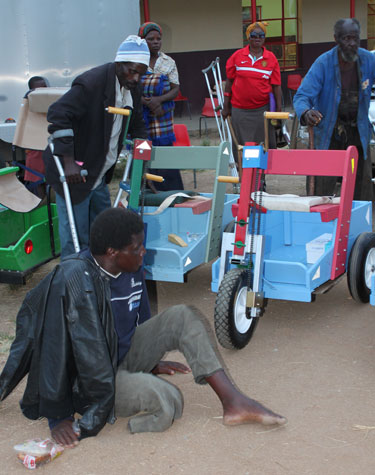 Dragging his useless leg to his new cart, this Liswati man will be able to move about like never before since his injury.

Though not often quoted, Leviticus 19: 9 to 15 reminds us, practically, how to treat the poor. Verse 14 tells us not to curse the deaf (even though they cannot hear) and not to put a stumbling block before the blind (they might fall).

Neither should we to ignore the disabled. In Eswatini they often are hidden away in their huts and thought to be cursed.

Thank you for not overlooking the poor and for serving Jesus as Lord.

Janet Tuinstra on the field with Harry & Echo & TLC