Life’s challenges usually sneak up on us. That’s what has happened to the VanderWal family in Eswatini.

Harry and Echo recently learned that their four boys, ages 10 and 7, are being harassed and threatened at the rural clinics.

None of the VanderWal children has been seriously hurt, but they admit to being “scared.” The boys hesitated to tell their parents about the attacks that usually happen after dark when adults are not looking.

“We’re not telling this so you can feel sorry for us,” Echo said. “Now that we know the truth, though, we can ask TLC supporters to pray differently, especially to remember the kids.” 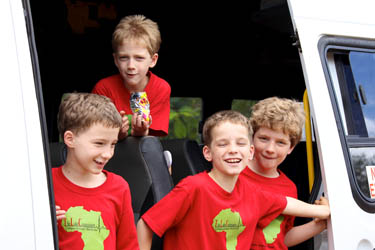 It’s snack-time during school on the Sprinter bus. Taking a study break are (from left) Zeb, Zion, Jake, and Luke.

Clinics often last until midnight. Crowds are larger than ever this year. “The Liswati kids are excited and want to relate. It’s like a carnival for them,” Harry explained.

Echo noted: “When you have so many orphans, these are the kinds of things that happen.”

Children without parents lack discipline and love. Often, they have nowhere to go at night except to a hut with other youngsters and little or no food.

Trouble sometimes starts early in the day, as the older triplet boys do their schoolwork in the Sprinter bus-truck. The kids bang on the doors and wait for the boys to finish, wanting them to play. 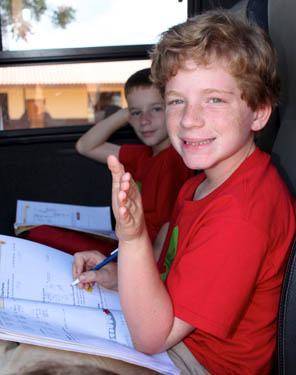 VanderWal boys study in the Sprinter while the bush clinic is being set up for the day. They are enrolled in a Christian video school from Florida.

The American boys are greatly outnumbered, however, and often take refuge by helping their parents or TLC volunteers. Some Liswati kids throw stones and use sticks like the teachers do to keep order in school.

What Harry and Echo did not know until recently, though, was that darkness brings additional problems. Often, the boys will go to the Sprinter and try to sleep.

That’s when the Liswati kids shake and beat on the Sprinter. The VanderWal boys said this goes on for 2 or 3 hours. When they try to leave the bus to report to their parents, sometimes a gang of kids will block them. Eventually, one VanderWal boy will climb over the back seat and quietly exit the rear door while his brothers distract the kid crowd. 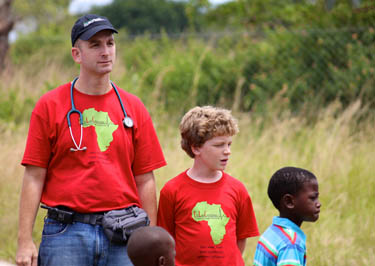 Harry doctors the schoolkids outside in long lines. Here, Luke has the same expression as his father.

When an adult comes to check on the bus shaking and beating, the kids scatter into the night.

“After dark the kids are hard to see,” said Luke, age 10. “They chase us around until they catch us. Then they like to choke us. They might be trying to communicate with us but not in a very nice way.”

“Our kids finally talked to us,” said Echo. “They said they did not want to disturb us, knowing we were busy. They were not dramatic with us. They just talked. Needless to say, we were sad and know we must take precautions against this kind of behavior.” 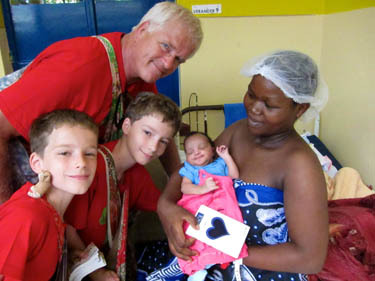 Harry admitted: “We know we are distracted, especially at night when we are trying to make sure all those who have tested positive for HIV receive counseling and get their medications.”

When the boys were little, they were cared for by a Liswati translator during bush clinics. The clinics were not so crowded, and young children are afforded more protection by the Emaswati themselves. 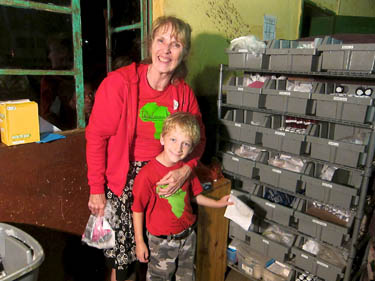 Zion (aka Mandla which in SiSwati means “strong man”) fills prescriptions in the mobile pharmacy with his Grandma (aka Gogo).

The day after this “challenge” came to light, Harry and Echo called a staff meeting. They asked the boys to tell in their own words what was happening.

Tholakele cried, Phumzile insisted Harry and Echo warn the kids when they address the crowds in the morning, Fortunate vowed to teach the boys how to respond in SiSwati, and Thulani prayed.

Thulani spoke to God, saying in part: “Thank you for the boys talking to us. We know we need their parents to help us. You care about the boys and love them. We know you will assist us with this problem.”

Tholakele said, “I will tell those children ‘You be nice to these boys. They are young, but they have big hearts. They bring you movies about Jesus. I don’t think you know Jesus yet.’”

Tholakele added, “I was so angry when I heard this. I will go outside and tell them next time. I will check the Sprinter after dark when the boys are tired and want to sleep.” 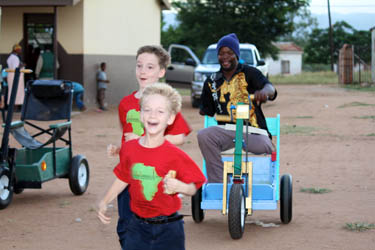 The boys Zeb and Zion (forground) may be fast, but not fast enough to outrace this one-legged man in his new PET cart.

Fortunate has started giving the boys SiSwati lessons during their school recesses. One of the first phrases she taught them was “You provoke me.”

When the Liswati kids say they are hungry, as they often do and often are, the boys are learning to answer, “My parents are doctors not cookers (chefs).”

When the Liswati kids ask for money, as they often do, Fortunate is teaching the VanderWal boys to say, “I am a student. I have no money.” Liswati children know that those “fortunate” enough to be “schooling” will not have any cash in their pockets.

Jesus looked upon the crowds in Matthew 9: 36 & 37. “He had compassion on them, because they were without a shepherd. Then He said to his disciples, ‘The harvest is plentiful, but the workers are few. Ask the Lord of the harvest, therefore, to send workers into the harvest field.”’

We want to be workers in the Jesus’ harvest field in Eswatini. We covet your prayers for us all.

Janet Tuinstra with Harry, Echo, & the boys on the field

P.S. The boys’ cousin, Levi DuMars, put things in “heavenly perspective” this week as he prayed at lunch in Idaho: “Jesus, I love my cousins so much. I wish they could come here right now, but they need to take care of the world…”
VanderWal Boys Photo Gallery »