Rebekah Sartori is a nurse who feels God has called her to Eswatini for the “rest of my life, with the understanding that if He asks me to go somewhere different tomorrow, I will.” 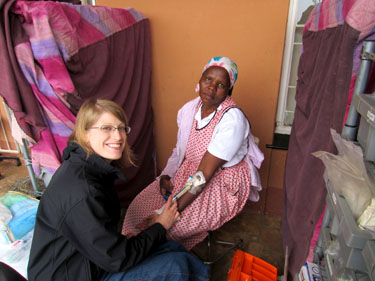 Megan McNerney, with a background in economics and international studies, has worked for the Texas Legislature and a federal agency in Washington, D.C. As impressive as that sounds, and it is impressive for one who is 24 years old, Megan says, “This opportunity at The Luke Commission is so much bigger, because I can serve Jesus openly.”

Today in their new TLC positions, Megan is Programme Coordinator (the English/SiSwati word for “program”), and Rebekah’s title is Nursing and Volunteer Coordinator. 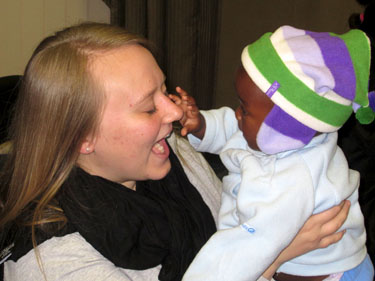 Megan cuddles a Liswati baby in his new hat and sweater, compliments of TLC.

Both ladies chuckle at their titles but take their jobs ever so seriously. Each raised her own support from friends and family to serve in Eswatini. Neither receives a salary from TLC. They share an apartment and are becoming good friends.

Harry and Echo VanderWal, TLC’s directors have breathed sighs of relief and gratitude since Rebekah’s and Megan’s arrival.

“Having them here fulltime gives Echo and I time to focus on projects we have not been able to tackle,” said Harry. “We have more family time, too.”

Echo said, “Their help and expertise allow us to concentrate on strategy, vision casting, and medicine. And that’s what we love.” 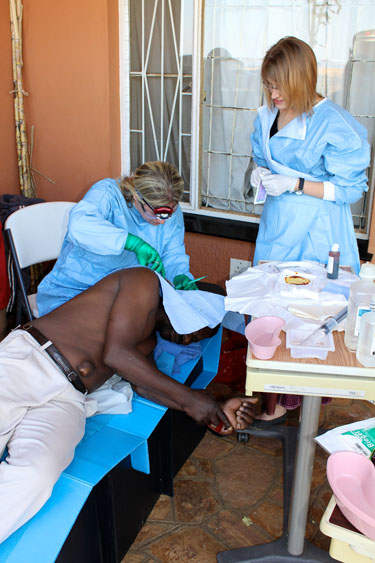 Echo performs minor surgery on a man’s neck. Rebekah assists. The operating room is the front porch of the rented TLC house.

Rebekah was graduated from Cedarville University in Ohio with her nursing degree in 2005. She worked as a labor and delivery RN in the United States, but did three short-term stints in Eswatini with the VanderWals in 2008, 2009, then 2010.

Now age 27, Rebekah recommends that anyone who feels God nudging them to a foreign mission field should volunteer overseas on a short-term trip. 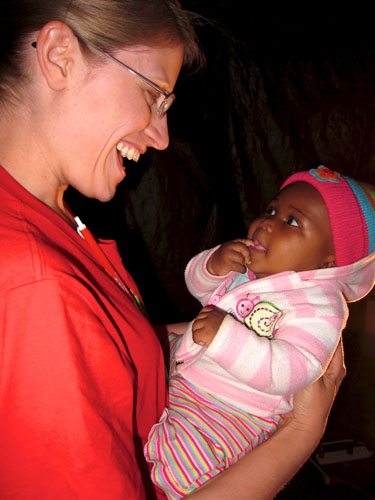 “Those trips helped shape the calling in my life,” notes Rebekah. In Eswatini since June, Rebekah misses her family, but knows her parents “want me to serve the Lord and are happy I’m here.”

“Patient care in Eswatini seems totally different but also totally the same,” observes Rebekah. “God has prepared me in what I didn’t even realize I would need to know.”

For instance, Echo has been very ill this summer of 2011. Rebekah has been her live-in nurse. “Then Echo learned she was pregnant. How’s that for His perfect timing for me to be here.”

And on a day-to-day basis, what does Megan do? 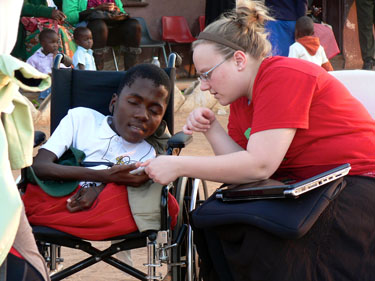 Megan helps this young man listen to music at a bush clinic. He may only have part of a body, but he demonstrates an overflowing spirit and faith in Jesus.

“I put Harry’s and Echo’s administrative brains on paper,” she laughs, with one of those laughs that’s contagious even via Skype.

Asked to outline her skills and duties, Megan says: “I have developed a way of thinking that sees the big picture but can break it down into smaller pieces. I try to grasp the different pieces of TLC and how they interact on a daily basis.”

Megan has taken over many computer duties which fell to Echo. “I want to lessen Echo’s load, so she doesn’t get bogged down in details.” 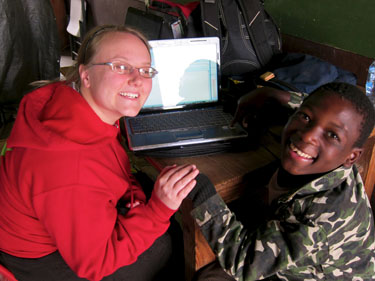 Megan befriends a Liswati boy who wonders about her computer. Her “mobile bush office” is a small enclosure behind a tarp.

Also, Megan is gathering information for a mobile laboratory and working on requirements for a USA-funded circumcision grant. “I can reframe proposals for different audiences,” she says as an example.

What about boyfriends and love, marriage and family for these young ladies?

They admit to having had numerous discussions about these very topics, but neither has a boyfriend or is actively looking for one.

“When I thought about coming to Eswatini fulltime, this was initially a struggle,” admits Rebekah.

And from Megan: “Having a boyfriend has never been an ambition of mine. For this season of my life, I’m content. I’m not some super spiritual person, but I know that I must develop my relationship with Jesus and know where He wants me to be before intertwining my life with someone else.”

Megan first learned of The Luke Commission from her parents Jim and Faye McNerney, who served short terms as volunteers with TLC. Her family is from Ohio. Right now, Megan intends to stay in Eswatini two years.

Rebekah’s family lives in Kentucky but came from Wisconsin.

After their first full summer (winter) in Eswatini, the women are as eager as ever.

“”I feel so blessed to serve on the front lines of the mission field here,” declares Megan.