TLC Makes-Do in Eswatini, While God Crafts the Outcome

There’s a make-do way of life in Eswatini that extends to The Luke Commission’s day-in and day-out encounters with the hurting, ill persons.

Take the encounter of the vacuum cleaner and the purple crayon.

Mduduzi, a late-twenties translator who started with us in 2005 has grown with The Luke Commission, brought his neighbor and her daughter to the Manzini mission house. Harry and Echo are careful not to encourage those in need to simply show up at their home, but exceptions and unusual circumstances always exist.

The little girl and her mother sat on the porch all day, as the team repackaged medicine and prepared for next day’s bush clinic.

Echo returned in the late afternoon after assisting in surgery all day at RFM. “This girl has something in her ear. It’s all red and infected,” Duzi said. 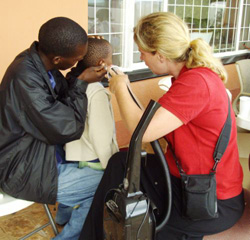 TLC motto – When you don’t
have conventional equipment,
use what you have.

Echo looked in the little girl’s swollen ear with an otoscope and, sure enough, saw a foreign object. “I don’t have the tool I need to remove it,” Echo noted aloud. “Let me think…”

Moments later after trying several other options, she said, “Bring me the vacuum cleaner and its attachments. Get that small funnel from the kitchen, too, please.”

Using the vacuum cleaner hose for suction, and a kitchen funnel, syringe, and a piece of IV tubing to access the object, Echo attempted to remove the offending particle. The girl was skittish and hard to keep still. Duzi soothed her, promising a lollipop in exchange for compliance. Gently and persistently Echo worked for 20 minutes. “I think we almost have it, but it is slippery and hard to grasp.”

Harry arrived home as the operation ensued and thought water might help flush out the entity. Harry poured, Echo continued to suction with the vacuum cleaner, and out popped a piece of purple crayon. 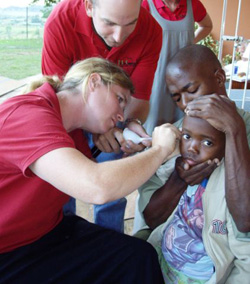 Echo tries to grasp offending ear object. Here comes the piece of purple crayon.
The little girl stopped squirming, Duzi gave her a treat, Harry handed her smiling mother a week’s worth of antibiotics, and the happy patient skipped out the gate.

Now consider the man disfigured and in pain from a large, cancerous tumor covering his cheek, chin, and throat. His sister and nephew brought him to a TLC clinic, seeking answers and assistance.

“We were amazed,” said Harry. “No one had told him or his relatives what was wrong. He had visited many health care facilities. He was simply given Tylenol and sent away.” 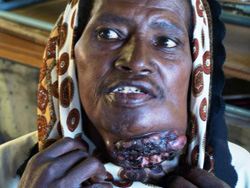 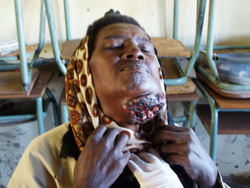 It fell on Echo to break the news. “When we came up with the name The Luke Commission, I did not know ‘compassionate medicine’ would so often mean ‘comfort care’ for those on the edge of death,” she said.

Listening to his nephew translate Echo’s English, the man accepted the news stoically, but his eyes watered and moisture slipped into the bumpy mass. Echo explained that eating would become increasingly difficult. Pain would be his constant companion. Nothing could be done to stop the cancer. Echo encouraged his sister to mash his food and gave her pain medicine to last him at least two months.

When asked about his relationship with the Savior, the sick man responded as so many Emaswati do. “I want Jesus,” he said. “Will He still take me?” We clasped hands, prayed, and presented a SiSwati Bible to the dying man. Oh, for the joy of deliverance in the midst of suffering… 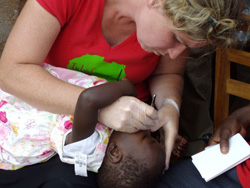 Meet the tiny girl with a kernel of corn imbedded high in her nostril. By the time Echo assessed the situation at an outdoor bush clinic, the girl’s nose was inflamed, and she was running a fever from infection.

As normally happens, Emaswati waiting in line for treatment watch as procedures unfold.

In the shade of a small building where The Passion was being shown, Echo sat the frightened girl on her lap, gathered tools from her medical cart, and started probing. The girl’s mother held her little one’s arms and legs, questioning if “that white lady knows what she’s doing.”

“I wondered, too,” said Echo. “That corn kernel probably had been in her nose for weeks. It was sprouting.”

Several tense moments later, the corn dislodged. Echo pulled it from her nostril, displaying the culprit to the crowd. They cheered and raised their arms in mutual victory. The struggling girl burst into a smile. So did her mom.

Sometimes The Luke Commission team attempts to solve a medical problem and fails. It’s as simple as that. Or is it?

Another girl, 10 years old, was brought to a TLC clinic. She and her mother stood in the eyeglass line all day. The schoolgirl could not see the blackboard and suffered from headaches. 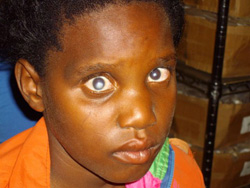 No one was surprised. One of the child’s eyes was completed covered with a huge cataract. “If we had been here a few years ago, we could have referred her to Dr. Pons at Good Shepherd Hospital for cataract surgery,” Harry said. “But it’s too late now, and she is permanently blind.”

When told the news that eyeglasses would not help, both mother and child left, shuffling away slowly and silently. They moved to the end of the medical line. Night had fallen hours ago and the crowds were thinning.

As we’ve witnessed repeatedly, God places people right where He wants them everyday and at every clinic. So He had these two. Since Harry could see the end of the line, he took extra time with this mom and daughter.

“How can we help?” Harry asked, after hearing the story about standing all day in the eyeglass line and not getting any satisfaction.

“We want a pair of sunglasses,” her Mom said, “so the bright sun will not give her so many headaches.”

“I was astounded,” Harry noted. “We were trying to solve a huge problem in the eyeglass clinic and could not. But sunglasses we had.”

Harry wrote a prescription for sunglasses and sent the mom and daughter to the pharmacy. They walked away, delighted with those results.

“People will tell us they have been ‘perfectly healed’ after being treated by The Luke Commission. We know they have not been healed,” explained Harry. “We have come to realize, though, that just showing tenderness and compassion is a form of healing to them. And, of course, those who accept Christ truly are healed.”

The VanderWals are thrilled that their long-term residency permits were granted by the Liswati government. After days of filling out forms and weeks of waiting, The Luke Commission leaders were recognized as medical missionaries to Eswatini and were exempted from paying the fees normally required of foreigners. “That’s money desperately needed for medications and petrol to travel to the clinics,” Echo exclaimed. To God be the glory!

Grateful for your assistance and prayers and faithfulness,
Janet Tuinstra for Harry and Echo, Jacob, Luke, Zebadiah, Zion