This is a story which started in 2006. Picture this bush clinic. We drive up to a new spot, knowing the people here have recently been displaced from their homes and community when the land on which they lived was sold.

The Emaswati we meet are slowly building their new huts, (nothing happens quickly when money is scarce), but their new gathering site features only a huge black tarp loaned by a semi-truck driver for the day.

It is hot and dusty. Many of the people look sick, but they wait patiently for The Luke Commission team to figure out how and where to set up a clinic. We hear some mutterings about it being impossible…

However, an hour later, we are ready for patients.

The pharmacy remains in the larger trailer to guard the valuable medications. The film plays to an eager crowd under the tarp, because it’s the only place dark enough for people to see the screen. My, it’s blistering in there.

The eyeglass department is set up next to a fallen tree. No other trees grace the area, only shrubs and thorns. That means no tarps can be strung from branches to afford a little shade. Triage is anywhere where a Liswati in a red skipper (t-shirt) stands.

The medical department is placed in the center of the “open air” activities. The Liswati staff line up patients. Harry and Echo sit on lightweight chairs or the ground. We must see about getting more chairs for the clinics… 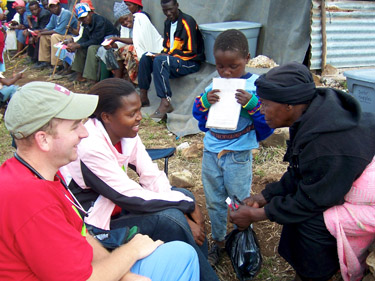 At this same “outdoor” clinic in 2006, Harry treats a Liswati widow, who traditionally wears black for two years to honor her deceased husband.

Waiting quietly in queue is a woman and her whimpering baby. Nelsiwe is the lady’s name. She talks to Echo through a Liswati translator. “Please show me,” Echo said.

None of us present that day ware prepared for the next few minutes. No photos are taken of the extensive wounds, but the picture of the young mother and her new baby is stamped in our minds.

Nelsiwe has a terrible fungal breast infection covering her whole chest. She is struggling to breast feed her hungry infant.

Gently washing her breasts, Echo layers them with soothing ointment, covers them with clean bandages, tells her how to care for the infection, gives her antibiotics, antifungals, and more ointment to take home. Nelsiwe smiles and bows in thanks, but pain is still etched on her face. The baby continues to cry. Echo gives Nelsiwe some formula to supplement her milk.

Echo encourages her to come to the TLC base for more medication and more follow-up care. She assures Nelsiwe The Luke Commission will reimburse her for transportation to Manzini. 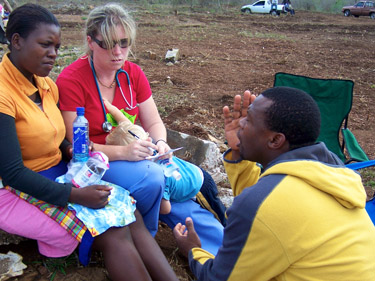 This is Nelsiwe as we met her in 2006 after she has been treated by Echo. TLC translator Sipho (right) explains how to use the medications and wound supplies she holds in her hand. Notice the cement slab on which Echo and Nelsiwe are seated. The baby Echo is holding is Zion.

The VanderWals treat Nelsiwe for two years. The infection gets considerably better but never heals entirely.

Then in 2008, Nelsiwe learns she is HIV positive. Her CD4 count drops into the 200s in 2009, so she qualifies for ARVs. On one of her checkup trips to the TLC campus, Nelsiwe brings the VanderWals four chickens to show her gratitude. One chicken is a valued gift, but four… “I thank God for being strong again, and I thank you for loving Jesus enough to help me and help me and help me,” says Nelsiwe.

Today in 2011, the fungal infection plagues Nelsiwe no more. Her child is 5 years old and tests negative for HIV. And she has a new baby girl, who because Nelsiwe took ARVs when she was pregnant has less than 1% chance of having HIV. 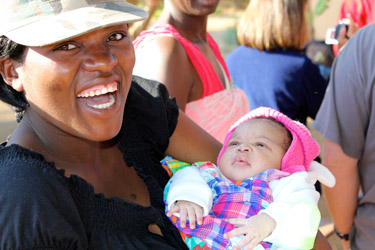 This is Nelsiwe with her new baby girl at a recent TLC clinic. The joy in Nelsiwe‘s cheeks and eyes are a far cry from the young woman we met in 2006.

If Nelsiwe was not taking twice-daily doses of ARVs, her new baby would have one in four “chance” of contacting the dreaded virus. Nelsiwe’s face radiates joy found with better health. That makes those of us who met her five years ago smile, too. 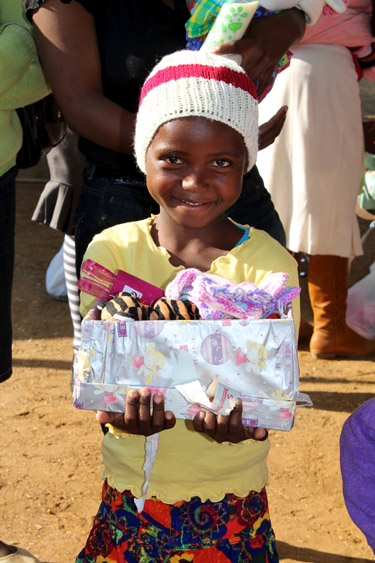 Meet the child who was starving 5 years ago and close to dying, because her mother’s breasts were so infected she couldn’t feed her. Here she has a new outfit from TLC and an Operation Christmas Child gift.

Without your gifts, this story could not be told.