Seeing Beyond Statistics to the Heart of the Matter

Occasionally statistics can flow from cold, hard facts into the lives of precious 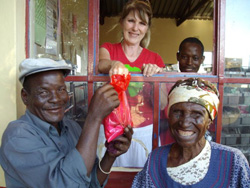 Grateful Liswati couple receives
medications from Jan and Themba
Pharmacy. More than 130,000
packets have been given and
explained how to use this year alone.

people. That’s the emphasis of this Luke Commission update. But first, those wonderful numbers for which we praise the Great Physician.

During this year’s first months, 17,572 Emaswati were treated by Harry and Echo at the mobile clinics. The medical patients received more than 130,000 specially-packed packets of medications. Everything was free.

Another 1,716 were tested and counseled for the HIV virus with more extensive AIDS help on The Luke Commission’s horizon. Some 8,197 Emaswati with eyesight problems were diagnosed and given eyeglasses.

Eyeglass clinic presses on
into the night…
Leaning heavily on stick canes, two elderly women walked 40 kilometers to have their eyes tested. Neither had seen well for years.

The two-day journey meant they slept along the way when night fell. The eyeglass line was long when the 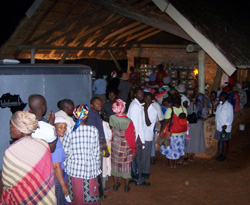 Eyeglass clinic presses on
into the night…

women arrived at the clinic, but they were determined. Finally, their turns came. The autorefractor indicated one lady needed glasses with a plus-power of 11; the other needed 9 plus-power.

Those were difficult prescription needs. However, minutes later both pairs were located in The Luke Commission’s inventory of 3,600 eyeglasses.

Though tired and hungry and dirty, the women gleefully marveled in their newfound sight. “I can see! It’s a miracle!” shouted one. “I do not know where to look first. All the colors are so beautiful,” exclaimed the other. 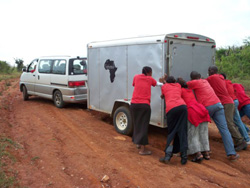 Where there’s a push,
there’s a way…

We’re certain by now you are praising God!

A sampling of north-south-east-west communities far out in the Eswatini bush include Ndunazithini, Tsambokhulu, Kukhanyeni, Mebelebeheni, Ncangosni, Mphondla, Lushikishini, Endilinilembi, just to name a few. All locations were accessed by dirt roads over which The Luke Commission vehicles and trailers traveled safely (thank you, Jesus) 17,000 kilometers, more than 10,000 miles. 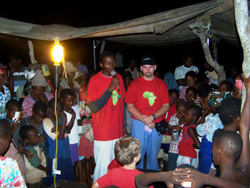 Harry asks. “Yes, yes, yes, yes…” are
the answers.
At each clinic a movie highlighting the life and death of Christ was shown on a portable large screen with a generator and a laptop computer. Using a microphone to reach the hundreds watching, a translator team member turned the English subtitles into SiSwati.

An invitation followed each viewing. Some days no one responded; other days 322 or 205 or 62 Emaswati said “yes” to Jesus and prayed, asking the Creator of the world to be their Savior.

The Luke Commission team wrote down the names and churches of 4,784 persons who accepted Christ. Hundreds followed Zionism, the pagan religion which mixes Old Testament stories with ancestor worship and witchcraft. Now they are new creations…

“The Zionists are despised. Most Liswati pastors do not like to serve them,” Pastor Zakes said.

But Jesus died for the Zionists, and The Luke Commission counts it a privilege to serve them.

New Bibles, New Hope – “I send
my Word out, and it always produces
fruit. It will accomplish all I want it to,
and it will prosper everywhere
I send it.” -Isaiah 55:12

SiSwati and English Bibles totaling 5,159 were presented to new believers. Echo told the crowds who wait patiently, sometimes hours, to receive Bibles: “Our goal is to get one SiSwati Bible into every homestead in Eswatini, not two or three in one home and none in others. So please stand with your family members.”

Emaswati have only read God’s Word in their language since 1996. Very few own SiSwati Bibles. But The Luke Commission, as God’s messenger, is changing that!

English Bibles and biblical study books are given liberally to the young people who are learning English. Children receive coloring books depicting the life of Christ. It’s a hallelujah time for everyone! Men and women dance and clap. Kids gently open their new Bibles and start reading to one another. 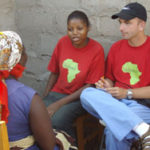 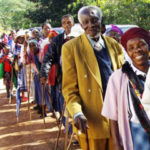 Happiness is guaranteed treatment, no matter how long the wait…

Where to show The Passion was a continual test in ingenuity. How can the blazing African sun be blocked so viewers can see the screen?

Harry and Echo tried under tents, in classrooms, under the stars, but never in a chicken coup. Until recently. A police post high in the mountains 2.5 hours from home base in Manzini was the site of one bush clinic. The largest building on the post was a huge chicken coup, minus the chickens but still smelly. Despite the accommodations, 37 Emaswati gave their lives to Jesus.

One half of the bush clinics were return visits from 2006 or 2007. “We can’t keep up with the requests for repeat and new clinics,” said Harry, “but we sure enjoy trying.” 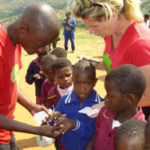 Echo and Small Sipho check the heads and hands of thousands of schoolkids, looking for fungal infections. 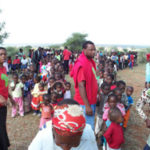 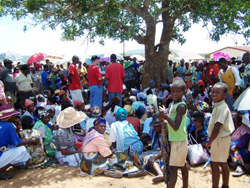 “Have you heard of this Luke Commission?”

“Oh, yes,” the second priest replied, “the saint of healing.”

And so grows the reputation of The Luke Commission in Eswatini, southern Africa.

Orphans, “vulnerable” school kids, mothers, babies, sick children totaling 7,049 have received new clothes and shoes this year. Some 5,250 packets of vegetable seeds have been given to those Emaswati who plant gardens. School supplies have been placed into the individual hands of 1,075 youngsters.

The Luke Commission team identified 80 persons who needed cataract surgery. All received the operation free in partnership with the Lions International, Christian Blind Mission, and Dr. Pons. Harry and Echo also brought 35 patients into the hospital for other surgeries.

The VanderWals have another 30 surgery patients waiting to be scheduled. Some 45 disabled persons hope for assistance. Another 25 patients need seizure medications and education. This week Harry and Echo are launching an advanced HIV-AIDS service. 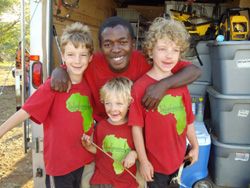 Baby Themba cares for Zeb, Zion, and Luke in the bush. Jake is elsewhere making friends.

The Luke Commission on
assignment, mile after mile,
mountain after mountain.
Jesus Christ is the foundation of The Luke Commission. Americans and Canadians are the pillars holding up this ministry and making it grow. Thank you. We know His ways are higher than our ways. 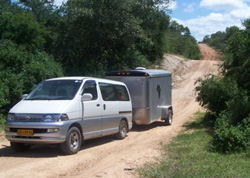 The Luke Commission on
assignment, mile after mile,
mountain after mountain.

Therefore, we are thrilled to soar with Him.

Grateful to be along for the ride,
J. Tuinstra for Harry, Echo, and the boys