Dr. J.D. Crooks saw a need in the Eswatini’s rural communities, listened to gentle promptings of the Spirit, started solving a problem with his prior and present knowledge, saw other people unexpectedly come a long side, and then watched God pull everything together.

The result: a portable digital top-of-the-line x-ray system which enables The Luke Commission to take x-rays of patients at their rural mobile clinics and immediately have images to diagnose. 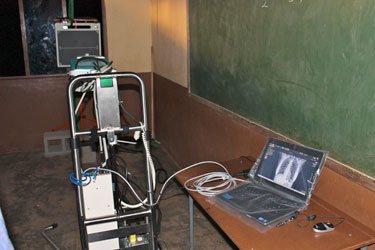 Set up and ready to go in a rural Liswati schoolroom is TLC’s new portable digital x-ray unit.

“It’s a marvelous system,” said Dr. Harry VanderWal. “Now we can tell if someone has TB which so often accompanies HIV. Now we can see if someone’s bone is broken. Oh, the possibilities are endless and at our fingertips.”

Dr. Crooks is a radiologist in Oklahoma City. In 2009, he joined his church’s mission trip to Eswatini and met TLC.

“God is working through The Luke Commission. That was apparent to me,” said Dr. Crooks.

Returning to his home and his job, Dr. Crooks’ thoughts remained in Eswatini. He began to investigate how to build a portable x-ray system which could withstand the dust and dirt of a Liswati bush school and the bumpy travel to get to clinics sites. 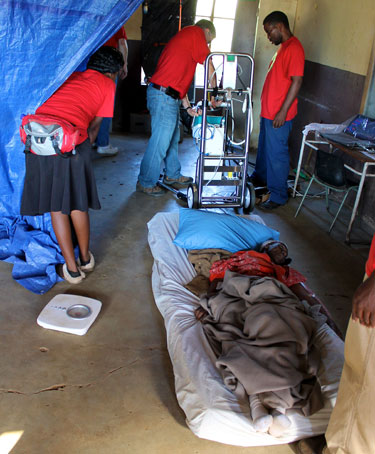 The end of March, 2012, Dr. Crooks and an electrical engineer friend, Jerry Sparks, flew to Eswatini with all the parts and pieces of the new system, put it together, taught Harry and Echo and some Liswati staff members how to use the system, and piloted it out at two clinics.

Back home in the U.S. in 2011, Dr. Crooks is thinking and asking God for direction.

“At Thanksgiving, I gave a commitment to Harry and Echo,” Dr. Crooks said. “I had seen the continuity of care they give rural patients. They understand what health matters to look for in Eswatini.” 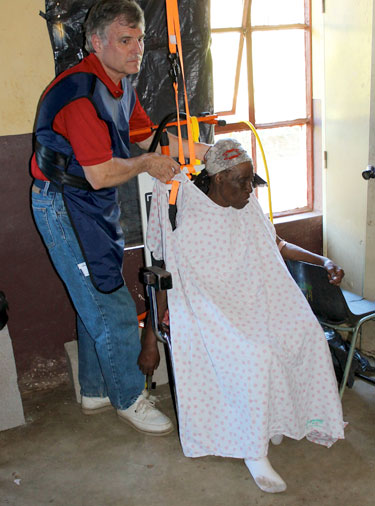 Jesus started sending other people to share his dream. They shared their finances and their expertise. The system cost $70,000, donated by Dr. Crooks and his wife Karen. (The couple has four grown children and eleven grandkids.)

Harry, however, values the mobile x-ray unit with all the computers, extras and ongoing technical support at $120,000.

Talk to Dr. Crooks about what God and he have accomplished in the last nine months, and the doctor simply points to what others contributed, instead. 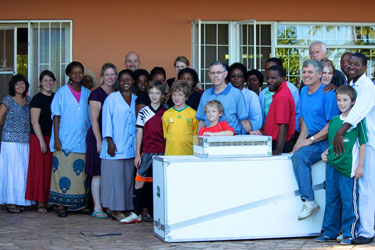 For instance, his sister Sue Baldwin of Little Rock, Arkansas, is in the first stages of Alzheimer disease and knew she couldn’t go to Eswatini but wanted to help. Dr. Crooks said she donated 15% to 20% of the funds.

“Many people are behind the scene,” Dr. Crooks noted.

He owns a practice with two other doctors at Diagnostic Radiology PLLC in Edmond, OK. “This was my week to work,” Dr. Crooks said while in Eswatini, “but my partners were very agreeable to help when I told them what I wanted to do here.”

Dr. Crooks teaches TLC staff how to use the sophisticated but bush-resistant digital x-ray system.

When Lamb heard Dr. Crooks’ idea, he convinced Ramsoft of Canada with offices in California to donate software worth thousands of dollars. Then Lamb helped Dr. Crooks, by configuring and providing dual hard drives on a computer to archive xrays, “so even five years from now Harry and Echo can compare a patient’s new x-ray with any older studies.”

Dr. Crooks and his wife Karen drove twice from Oklahoma City to Dallas, so Lamb could install the hard drives and load and configure the software on the computers destined for the rural Eswatini. 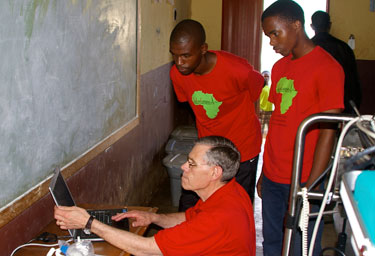 Dr. Crooks admits to battling doubts throughout the project. “When I start something, I do not like to fail. Even on the plane over to Eswatini, I wondered…Then I remembered how Jesus had led so many people to help…” That made him smile and offer up a prayer of thanks.

Sunday school friend Jerry Sparks, an electrical engineer with the Federal Aviation Administration, accompanied the doctor to Eswatini and assisted “greatly before we got here.”

Sparks took off work to make cases for all the equipment. Since the material didn’t come in on time as expected, he raced against the clock to complete the cases on Wednesday late January and then drove from Oklahoma City to Ohio to deliver the cases the next day for loading onto a shipping container, leaving the following Monday by ship to Eswatini.

He also raced against a snowstorm which finally caught up to Sparks as he headed home through Indiana. 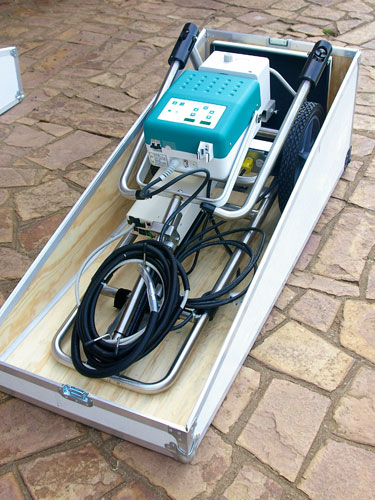 Tucked safely away is the portable x-ray system, built to withstand the rigors of bush travel and TLC clinic sites.

Just before leaving for Eswatini, Dr. Crooks called his local IT computer expert Shane Dawson to figure out why one computer would not connect with the internet. Dawson reconfigured some of the x-ray system’s computer, and has made himself available to remotely work by internet on the system if needed in the future from his site in Oklahoma.

“When I told him to send me a bill, he said it was his donation,” Dr. Crooks said of Dawson.

The very morning Dr. Crooks decided to come up with portable x-ray system for The Luke Commission, he walked into his office and his first patient was Jerry Borgert, the man to whom Dr. Crooks had sold his portable x-ray company 20 years ago. He had not seen Borgert for several years.

Jerry Borgert was just the person Dr. Crooks needed to question about possibilities for his new project. “I saw our meeting as a sign from God.”

Dr. Crooks explained: “Back then it took an hour to get an image, even in good conditions like a hospital. But technology has come so far. Now x-rays are digital with no chemicals, just what’s needed in the bush.”

During his pursuit for the best digital system to purchase, Dr. Crooks called experts at Samaritan’s Purse. They were using a different type of digital technology, called CR technology, but were having trouble with certain machines because of the dirty environments in which they were being used.

Repairing the machines was costly and time consuming – valuable time when people were dying of TB and needed diagnoses and treatment immediately.

Back to the drawing board went Dr. Crooks. He found another system, more costly but less likely to succumb to the elements.

After much research and prayer, Dr. Crooks bought the higher-end system for TLC.

Now the problem was to gather everything together and pack it for Eswatini.

Bob Burbury of MinX-ray in Springfield, Missouri, offered helpful ideas and ordered a big “dolly” to hold and transport the x-ray machine and power supply for the digital x-ray plate. Dr. and Mrs. Crooks made four trips Springfield, 300 miles one way, to work on the portable digital unit with Burbury.

Later, Dr. Crooks learned that he was only the second person to buy this new system. Soon after, Samaritan’s Purse ordered four such systems.

Meanwhile back in Oklahoma City, a radiologic technologist in Dr. Crooks’ office, Karen Humphries, developed a technique chart for different parts of the body to be used by Liswati staff members.

None of them had been medical, however, and none has been fraught with the obstacles Dr. Crooks’ and Sparks now faced:

…Getting heavy, oversized, bubble-wrapped pieces on the airplane; putting them altogether when they reached Eswatini; hooking up with a high-powered generator sent on a container weeks earlier to Eswatini via South Africa; trying the new system for the first time; training Harry and Echo and the Liswati staff how to use everything – all in one week.

“So much was out of our control and had been since the very beginning,” noted Dr. Crooks. “We saw miracles happen one after another.”

At the two TLC clinics in which Dr. Crooks and Sparks participated, some 50 x-rays were taken and read immediately. It was a sight to behold!

“Everyone has many tasks but seem to be compassionate,” Dr. Crooks said of the TLC team at the second clinic.

Harry bent down to talk to a lady who had lain on a mat all day waiting for treatment. “She needs an x-ray. Can we do it even though she can’t stand?” Harry asked Dr. Crooks.

“Do you have a chair with a curved back?” answered Dr. Crooks.

And he did. The x-ray showed she did have tuberculosis. Now she can be treated.

Written by Janet Tuinstra for The Luke Commission