String of Miracles Sails to Eswatini

What do the number of hairs on Jim McNerney’s head and a 40-foot container full of Luke Commission supplies cruising through the Atlantic Ocean have in common?

A big God with a bigger sense of humor willing to grant the biggest string of tiny miracles in a two-year project recently finalized. That’s what!

This sums up one of the latest Luke Commission stories. But first let’s add up the facts, figures, tidbits, and tales. 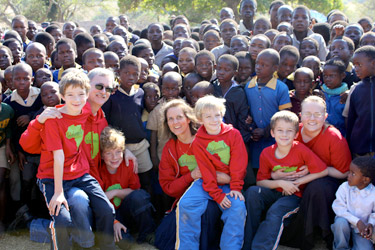 The McNerney home was frequently inundated with mail-ordered purchases made online by Harry and Echo in Eswatini.

Jim and Carla Klosterman donated the use of their barn to store everything. Lions Club members from northern Illinois made several trips to that barn in Dayton with their contributions.

Dozens helped. The sorting and packing sessions were filled with laughter but purpose. Then they waited, patiently and often prayerfully. Two years in Ohio, three years in Idaho they waited.

Monies that came into TLC were needed for the bush clinics. Some $8,000 to $10,000 simply could not be allotted to ship the 40’ container to Eswatini.

The VanderWals have four such containers on the ground, but most of those goods and provisions have already been used to treat the Emaswati medically, physically, and spiritually. Now they primarily serve as storage.

In God’s perfect timing, a few months ago Nazarene Compassionate Ministries, Inc., which often partners with TLC, decided to share one of its grants.

That grant would pay for the shipping of a 40’x8’x8’ container from Dayton to Norfolk, Virginia, across two oceans to Durban, South Africa, and then by railroad inland to Eswatini.

One miracle. Many more followed as the packing saga unfolded. By April 30th the container had to be in Columbus, OH, to comply with funding requirements.

In Idaho, Joseph Tuinstra and his crew separated hundreds of boxes and tubs of medical supplies and equipment, as well as a few of the VanderWal family items they have been without for seven years. 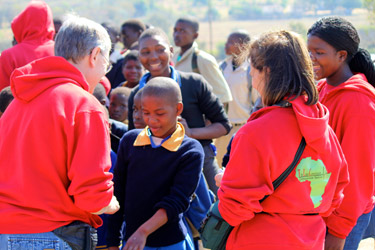 From faraway Eswatini, Harry and Echo began prioritizing boxes into three groups. Heart to Heart, who regularly delivers medications to TLC, agreed to ship the Idaho boxes to Ohio. But one snafu after another put the truck pulling out just a few days before the boxes were scheduled to be loaded on the container in Ohio.

Matters got muddled and confusing in Ohio, too.

Derek Bendickson, a construction manager, traveled to Jamestown, OH, and picked up two trailers that were to be sent on the container. Bendickson intended to oversee the complicated job of getting the trailers disassembled and into the container. His wife was in Europe on business, however, and when his daughter became ill and was hospitalized, he reluctantly had to change his plans.

Enter Greg Neeley. He owns Neeley Construction and works with his sons Grant and Scott.

Greg knew very little about The Luke Commission but as a follower of Jesus and a member of Christian Life Center, he offered his expertise and equipment, his brain and brawn. He later admitted, with a smile in his voice, that the whole project “was thrown in our laps.” 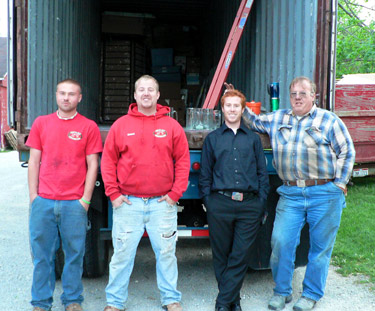 Greg exclaimed: “In five days we saw miracle after miracle. Satan tried to hold us back at every turn, but we got it done!”

First, the semi-truck hauling the container could not back down the driveway to the Klosterman barn where everything was stored.

“After multiple failed attempts, and Greg tried, too,” explained Jim, “we asked the shipper if we could put the container down at Greg’s home and business that was two and a half miles away.”

The truck from Idaho has not arrived. The larger of the two trailers only clears the container by 3/8 inch.

It’s raining off and on. Darkness sets in on CLC volunteers.

All the boxes in the barn need to be transferred to another truck and taken to the container – a whole extra step.

What to pack? What to leave behind for the next container? When and how many volunteers should come?

Jim and Faye had everything mapped out from Monday through Thursday with departure set for Friday morning. “Or so we thought,” said Faye.

The shipment from Idaho did not arrive Wednesday as scheduled. Consequently, on Thursday Greg drove to the depot an hour and a half away. He and his sons piled their flatbed truck and trailer high with the Idaho boxes.

The flatbed truck did not have a top. “We prayed to the good Lord,” said Greg. “Then we reminded Him, in case He didn’t hear the first time, that we really needed His help.” 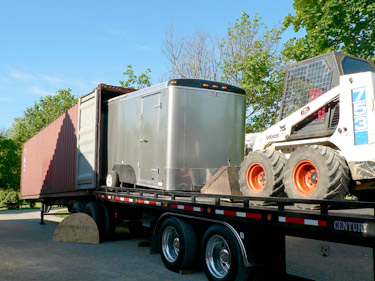 Benevolence from above did, indeed, surround everyone that afternoon and evening. The McNerneys “skyped” with the VanderWals in Eswatini to learn their latest preferences.

The smaller trailer was put in the bigger trailer and packed with extra fenders, wheels, axles, and springs, even crutches. Greg fashioned another axle on the larger trailer, so it could be pulled out of the container easier. He put casters on the bottom of the small trailer.

A donated $25,000 electrical wheelchair was included for a handicapped patient Jim and Faye, a physical therapist, met in Eswatini during their 2009 visit.

Friday morning arrived. Jim had to work at his office, while Faye remained at the scene. Packing continued. 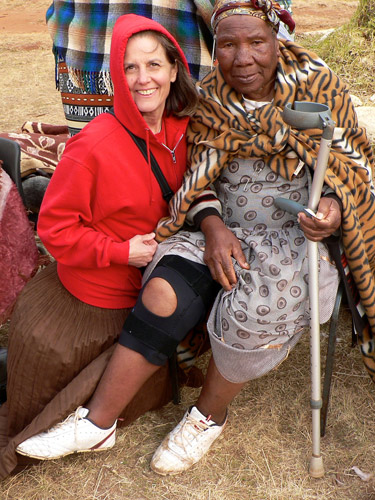 Greg rigged up a plywood barrier to keep boxes and loose items from falling forward onto the trailers.

Longtime TLC supporter Dr. Paul Carlson crawled onto the top of the trailers now inside the container and stuffed anything that was pliable into every inch of space – blankets, clothes, shoes. 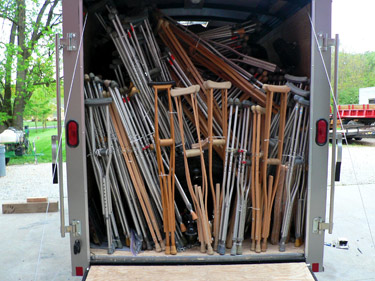 The large trailer houses the smaller trailer which is stuffed with supplies, including these crutches.

The semi-truck driver arrived at noon. “We were not quite done and had been told we had until 1 pm,” laughed Faye. “The driver was from Ghana. When we told him where the container was going, he just sat down and waited.”

“Satan threw a lot of curveballs at us,” said Jim. “If it weren’t for Greg and his boys, it wouldn’t have happened.”

Jim and Faye agree that enough boxes still remain in Ohio to fill another container. But for now, they are praying that the container enroute arrives safely in Manzini by mid or late June.

And what about the hairs of Jim’s head – those that may be quite a bit greyer since the container experience?

Matthew 10:30 says, and almost the same words are repeated in Luke 12:7: God “pays even greater attention to you, down to the last detail – even numbering the hairs on you head!”

Jim mused: “If Jesus knows the number of hairs on my head and cares about that, He knew what needed to go on that container. I must leave those details up to Him.”

To God be the glory! Janet Tuinstra for The Luke Commission