An alumni team from Cedarville University in Ohio recently worked with The Luke Commission in Eswatini.

“It’s what I expected and nothing like I expected,” said Jeff Beste, director of alumni who planned the trip for a year and a half.

“I wanted to experience the clinics with the VanderWals,” continued Jeff. “Boy, did I! Now I have a better picture of what Harry and Echo and their team face. I experienced the exhaustion they must experience each day. Then they get up the next morning and do it all again.”

Jeff jumped in and assisted in the triage department, fitted new shoes on hundreds of dusty children’s feet, and prayed for patients awaiting medical treatment.

“I was doing my stuff in triage, when I met a family that changed everything,” he noted.

The father was not going to test for HIV and did not want his five children tested. At the outset, that is. As so often happens at TLC clinics, a “no” turned to a “yes” as God moved in hearts. 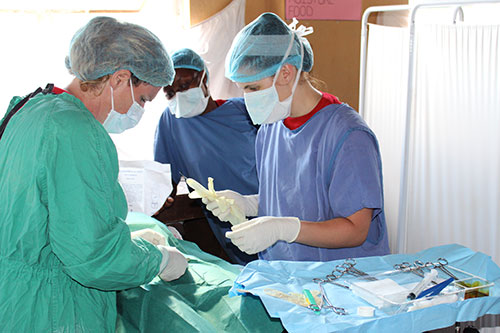 Katy Mann (right) of Wisconsin assists Echo with circumcisions at TLC’s mobile and surgical hospital. Liswati staff member talks the patient through the operation that is shown to reduce HIV transmission by 60%.

“When I pricked the finger of that man’s small son, he didn’t make a sound. But tears ran down his face,” remembered Jeff. The boy was positive, as were both his parents, and one of his four sisters.

Later that day, well into the night, Jeff sat holding the boy who at age 7 looked like a 4-year-old. Tired and sick, the little child laid his head against Jeff’s chest and fell asleep. Language barriers and cultural differences melted, as an educated American connected with a poor HIV+ Liswati boy.

Back to Jeff for a minute more: When Harry and Echo were named alumni of the year in early 2011, Jeff started to plan how he and other Cedarville graduates could join up with The Luke Commission in Eswatini. It would be his 14th short-term missions’ endeavor with Cedarville.

The father of three daughters, Jeff met and fell in love with his wife-to-be on a missions’ trip to Australia. “She was ministering to the unloved.” 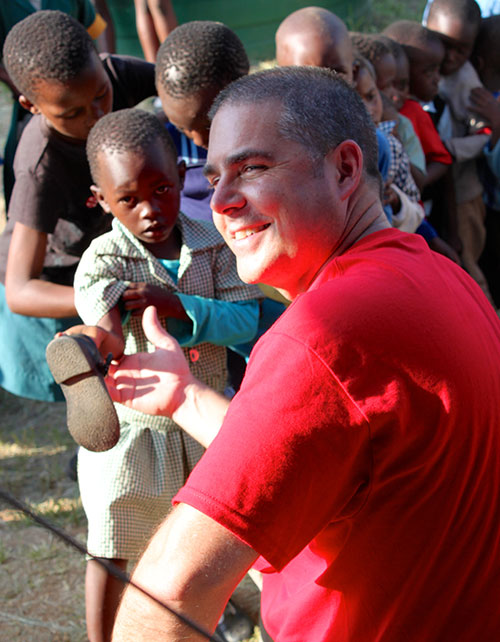 Jeff Beste and a little Liswati friend hold the boy’s worn shoe, as Jeff replaces it with a brand new pair of TOMS shoes. Dozens of Liswati children wait their turns to be fitted by Jeff.

Continuing with a catch in his voice and tears in his eyes, Jeff said, “I’m so proud of Harry and Echo and all they’ve done without to be here.”

He also expressed lighthearted respect for Cedarville graduate nurses Rebekah Sartori and Melody Miller who volunteer fulltime with TLC. “But it’s not about Cedarville,” noted Jeff. “It’s all about God.” He commended the whole staff, Emaswati and Americans, for their “selfless focus on others.” 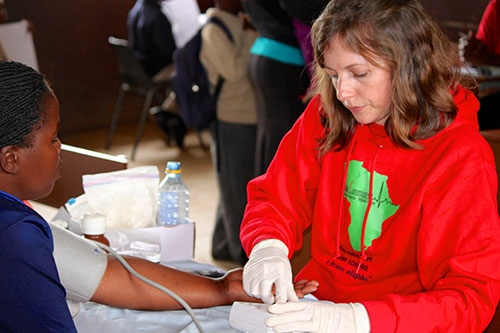 Cheryl Reese takes blood pressure of this Liswati lady at the same time Cheryl checks her blood sugar – all in a day in TLC triage.

Harry and Echo lived with their family “in a common space with everyone for several years. That was a real sacrifice,” Jeff said. He was excited that the VanderWal family has just moved into their own rented home near the new Miracle Campus land. “This could add a good 15 years to their ministry. I’m so glad they finally have a place of their own.”

Cheryl Reese of the Cedarville pharmacy department “clearly didn’t have a handle on what TLC really does until I got here. I’m in awe of what the Lord has allowed to happen with The Luke Commission.” 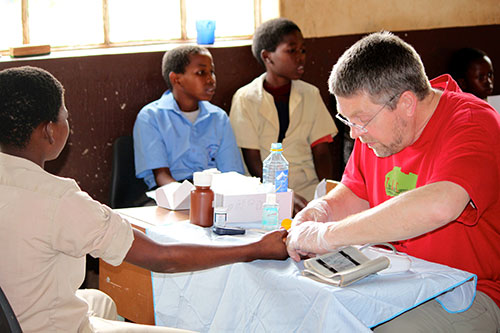 This boy choses to look the over way, while Tom Hutchison draws just enough blood for an HIV test. All three of these schoolboys have agreed with parental or guardian permission to be circumcised this day.

“It’s not like a job in the U.S. It’s deeper for each person involved,” observed Cheryl.

“We hear about missionaries not being fed or having great spiritual needs themselves,” Cheryl said. “But you’re in great shape spiritually. I love the way the whole team start every morning with prayer and Bible study.”

Cheryl appreciated, too, that “romantic expectations” about missionary work were not part of TLC’s mindset. “You don’t have some grand idea that you’re going to be happy 24/7 serving the Lord. I like that. It’s real but all very exciting.” 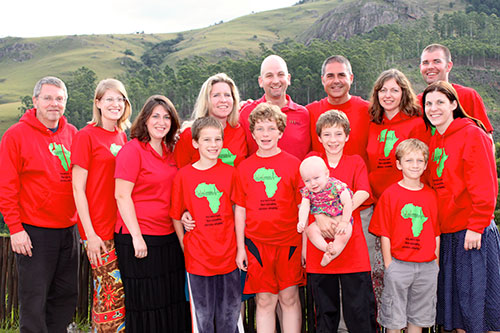 Observing that Harry and Echo and the team attend a “great church” (Potter’s Wheel), Cheryl agreed with Jeff that Liswati TLC board chairman Frans Pienaar and Potter’s Wheel pastor Kevin Ward are great cultural and spiritual mentors for TLC’s directors.

“I know our student body has been highly active with The Luke Commission this year,” added Cheryl. “I hope the students in the pharmacy school will get involved in the future.”

Bible Professor Tom Hutchison (Hutch) wondered on his last day in Eswatini how he was “going to explain this trip to people back home. It’s too easy to go back into life there.”

Hutch observed scenes that moved him at the clinics. “I watched. I marveled,” he said.

At one outreach where more than 800 patients were treated, Sipho addressed a crowd of 500 boys under 14 years. He asked three boys to stand beside him and said simply, “One of these three has HIV. Look around you and know that one of every three of you has it, too,” said Sipho.

“I was so touched by his simple illustration,” Hutch noted, “but even more when I realized the lifelong pall over them. We don’t live like that.”

Kevin Dougherty visits mothers and newborns in the Manzini mission hospital. This mother gladly dresses her baby in his new outfit and hat made by women from Grace Baptist Church in Cedarville, Ohio. Kevin now attends medical school in Colorado.

He watched two little babies and a beautiful young mother. “She should test every two to four months. It’s heart-breaking.

“I decided I could look at HIV through the cross but also the resurrection. The cross brings out the terribleness of sin, but the resurrection offers hope,” explained the experienced Bible teacher.

“How do I hold on to the ideas and lessons learned here?” Hutch asked aloud. “How do I continue to see life through a new lens, rather than slide away and get back into my set routine?”

Hutch suggested that The Luke Commission “is changing culture from the bottom up. Speaking righteousness into a whole country is a different challenge for me.”

After one clinic, Hutch declared, “The name ‘mobile clinic’ doesn’t do justice to what’s happening out there. I watched the TLC staff stop, get out of their vehicles, and build a hospital! Maybe you should use a military term MASH – mobile and surgical hospital. That’s what it is!”

Hutch was impressed how TLC keeps track of patients, such as those who are given CD4 tests and must be notified with results. “I was dumbfounded how Melody or Rebekah and Liswati staff members go back two days later to check on the circumcisions and find all those kids.”

Admitting only one regret, Hutch said he would have rather experienced The Luke Commission with his wife and two sons and a daughter.

Kevin Dougherty is in medical school at Rocky Vista University in Parker, CO. He especially enjoyed working with Harry diagnosing and treating hundreds of Emaswati.

Kevin also worked a few days at Raleigh-Fitkin Memorial Hospital, the mission hospital that partners with TLC for surgeries and extended care.

“I think The Luke Commission is doing amazing work, especially battling the HIV epidemic,” said Katy. “They have been able to reach people no one else has. They are dedicated to the people and the work they are doing and will help change the future of rural Eswatini.”

Kevin Dougherty was surprised about “the size, both in people and equipment, used to fulfill the mission of The Luke Commission. Before arriving in Eswatini, I had no idea the magnitude of the ministry.”

Kevin explained: “The way the VanderWals have integrated the Emaswati is so important to the success of TLC in the country. God has certainly blessed, and continued to bless, TLC with capable hands to do the work and willing hearts to financially support the ministry there.”

And there’s more, Kevin noted. “Working with Harry and Echo during the clinic days was a great experience and really opened my eyes to what it is like to be a medical missionary. These experiences have shaped my views on international medicine and will continue to influence decisions I make about my career as I finish medical school this spring.”

With these volunteers and their comments in mind, let’s glance at Psalm 118: 23&24. “This is God’s work. We rub our eyes – we can hardly believe it! This is the very day God acted – let’s celebrate and be festive!”