It was spring break with a purpose for 20 college students. 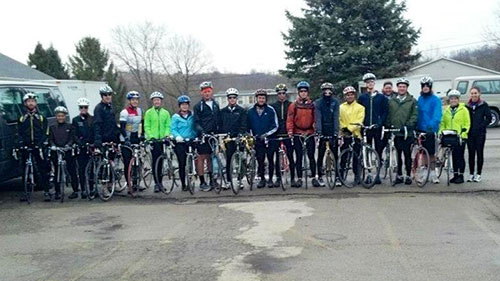 Ready to leave Mount Vernon on a rainy March morning – spring
break – are these 20 students who love Jesus and caught
the let’s-help-The-Luke-Commission bug.

Cody Raudebaugh and Mitchell Adams started last year pondering how they could support The Luke Commission Compassionate Medicine in Eswatini.

That wondering took shape in the form of a question, according to University Chaplain Joe Noonen. Could Cody and Mitch cast a vision to our campus community to ride from MVNU to Washington, D.C., to raise money and awareness?

“The two of them began to plan and then operationalize their plan against all odds,” Noonen later told TLC directors Harry and Echo VanderWal.

“Cody and Mitch cast the vision in our mission and ministry chapel, and they had a group!” Noonen explained. “They took care of every single logistical detail, completed all the paperwork to get approved, pulled together support resources, and on the first day of spring break, rode off campus on their way.”

For a year and a half, Cody and Mitch had taken cycling trips together. “But we wanted to do something bigger than ourselves,” said Cody. The farthest the two had ridden was 350 miles from Beavercreek, OH, to Chicago. 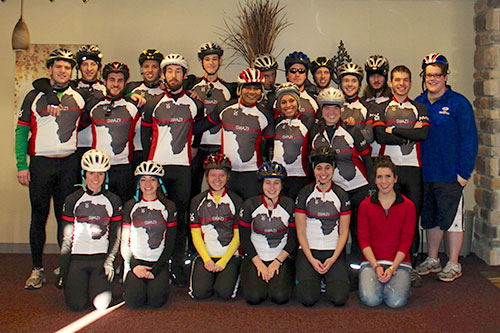 The MVNU team proudly wear a picture of Africa on their chests, pinpointing tiny Eswatini in the right-hand corner. Success for His glory and for the rural Emaswati!

“When my roommate came back from Eswatini all excited about TLC’s willingness to serve an entire population, I wanted to help,” said Mitch. “What you guys are doing is real.”

They biked 70 to 75 miles a day from Ohio through West Virginia, Virginia, Pennsylvania, Maryland, and, yes, even through parts of the Appalachian Mountains. No interstates were traveled. Dirt and windy roads were. 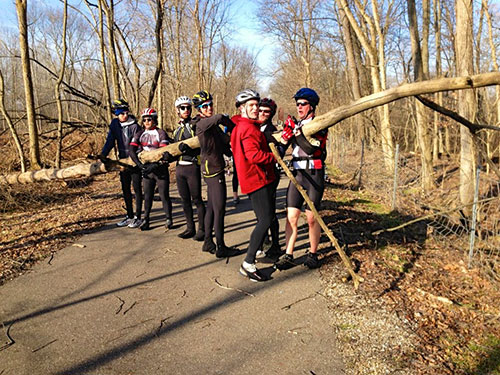 Obstacles came in all shapes and sizes for the MVNU bikers…One, two, three, move that large tree limb.

“I was amazed that no matter what happened in a day, the entire group was happy and positive when we stopped at night,” continued Cody.  “Tensions never became high.”

The bikers spent nights in churches. 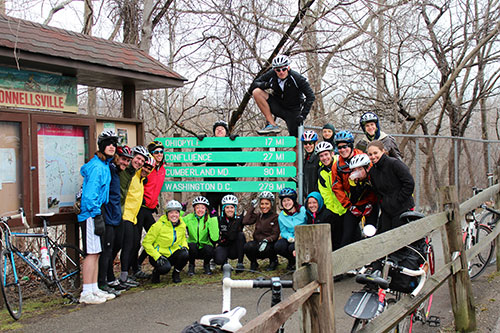 The sign says Washington, D.C., is still 279 miles away. But the Mount Vernon Nazarene University is ready to tackle highways, byways, and all the trails and paths in between here and there.

“Many churches opened their doors to us,” explained Cody. “God prepared those places ahead of time for us. They fed us breakfasts and dinners. We shared stories about The Luke Commission and left pamphlets and magazines with them.”

The team usually split off into four groups – the slowest group, “Team Infirmary” as they called themselves; the front group, part of the MVNU cycling team who were well-prepared; and two middle groups, who had trained hard also.

Mitch snapped his derailleur on an unpaved trail in Pennsylvania and had to walk his bike for several hours.

Earlier that day he had been riding in the rear of the team “praying and seeking after God. I really wanted Him to talk to me,” laughed Mitch. “He slowed me down, that’s for sure. Then I heard Him. He talked with me along the way.”

“My bike was fine, but my body was not,” he said. His face was scratched and his elbow was severely bruised. Mitch biked 7 more miles to a lunch stop, bandaged up, and finished 40 more miles.

“I won the best wreck of the trip award,” Mitch joked. “Even a drunk guy on the subway in Washington asked about my face.”

A month later, his face still sported a brown spot. Pastor Noonen said Mitch interpreted his tumble “in light of what he knows is going on in the lives of the Emaswati.”

Cody fell into a lane of traffic, when he started to turn left and caught his foot in his pedal. Immediately, a teammate redirected vehicles around Cody.

“My life flashed before my eyes, but there were no injuries,” Cody said. “Later, I thought about what’s going on in Eswatini – so many people my age with HIV, the huge TLC medical outreaches¸ caring for the physical and spiritual…”

Members of Team Infirmary, the slowest riders, were always singing and happy, Cody remembered. “I think they had the most fun of all of us.”

Drivers of two vans pulling two trailers full of equipment (and bikes on the way home) accompanied the bikers. The vehicles were on loan from the university.

When one trailer had a flat tire, a police officer stopped and took the van driver to a mechanic who fixed the tire, free of charge.

“Jesus provided for us from beginning to end,” noted Mitch.

“I learned once again that when we walk with Christ, we can fully trust in Him. This whole trip should not have worked, but He made it happen,” Cody explained.

After all accounts were settled and expenses paid, the 20-members team raised $8,508 for The Luke Commission.

“Cody and Mitch represent all that is good about MVNU. Their vision and passion represent what can happen when we live in loving obedience,” said Pastor Noonen. “I have heartfelt respect and gratitude for this memorable experience.” 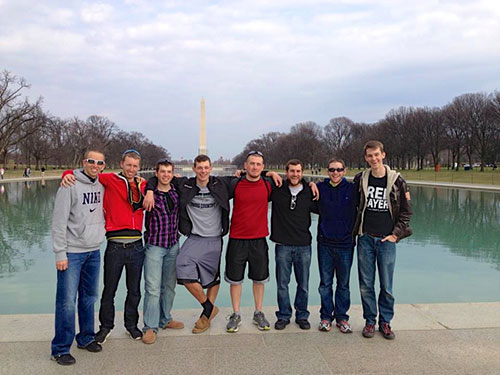 In front of the Washington Monument is part of the Mount Vernon Nazarene University team who rode 500 miles to U.S. capitol, talking about The Luke Commission all along the way.

Was it worth it? “Yes,” said Mitch and Cody. “We’re already planning to do it again.”

Giving up their spring break and convincing a whole group of students to do likewise, riding 500 rugged miles, and being weary and tired…what does it all mean?

“Both these young men would say ‘To God be the glory,’” concluded Pastor Noonen. “As I listened to them, they put the bike ride into its proper context. This is one small element of a larger story.”

Truly to God be the glory!