Celiwe Gives from Her Heart as She Sees TLC Give

“The Luke Commission loves Christ, walks with Christ, does everything with Christ,” said new Liswati staff member Celiwe Shongwe. “They have open hands, always giving, not hiding anything.”

Celiwe continued with tears in her eyes: “The Luke Commission is my home now. They give you whatever they have from their hearts, and they put Jesus first.”

Prayer is uppermost, Celiwe noticed, as TLC team leaves for each rural “clinic,” which the Liswati government has renamed “TLC’s mobile hospital.” 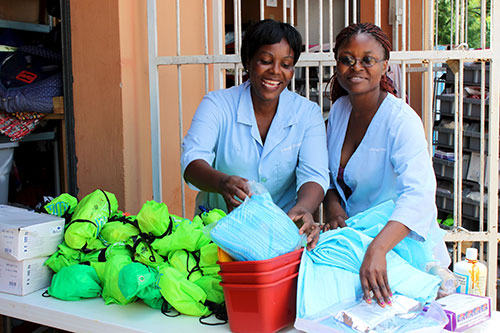 TLC staff members Dumi and Celiwe (right) pack male circumcision surgical kits for the next day’s clinic, when they expect 30 to 40 patients to undergo the procedure which reduces HIV transmission by 60%.

Celiwe added, “The Luke Commission team knows that to really help all the needy, they must be in Christ and let the people know that Jesus is why they come with free treatment and free medicines..”

At age 28, Celiwe has one child, a two-year-old daughter named Palesa. The baby stays with Celiwe’s mother who is a dressmaker in Manzini and has work off and on.

The baby’s father “doesn’t visit anymore,” admitted Celiwe. “He never did come to see me.”

She sees her child every morning before she walks 35 minutes to the TLC campus.

Celiwe has three brothers and one sister. She is the middle child and the first daughter. Her father had a stroke in 2005 and died in 2011.

As a schoolgirl, she loved to learn and to practice speaking English. However, she did not graduate from high school, because in her last year her father was too ill.

“There was no money for school. I had to care for him until he died,” Celiwe explained with no resentment. That’s what daughters, especially “first” daughters, do. 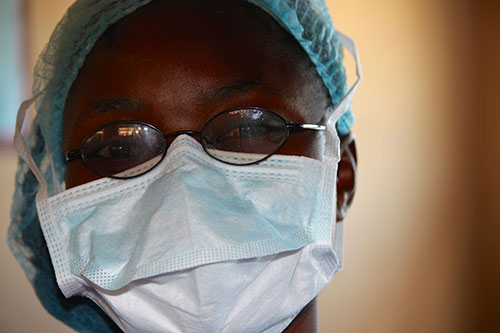 It might be a schoolroom in a Liswati rural school. It might be day or late at night.  But one thing is for certain. Celiwe is ready to assist in TLC’s mobile surgical department.

In her 18th year, Jesus became real and precious in her life. In May, 2012, she applied with The Luke Commission. She started as a temporary employee the next month.

“At first I was scared but now I’m used to it,” she said. “In MC we talk with the boys and men during their procedures. I love working close to Echo. She’s in the same room, and I learn much from her.”

Celiwe also admires American nurses Rebekah and Melody. “They are friends. They’re always smiling, even late at night. You can see if in their faces. They make me smile, too.”

As Celiwe becomes more and more integrated with The Luke Commission team and as she recognizes the contribution of each staff member, 1 Corinthians 12:27 pops into mind: “You are Christ’s body – that’s who you are! You must never forget this. Only as you accept your part of the body does your ‘part’ mean anything…” (Message)

Truly Celiwe values being part of The Luke Commission body.

by Janet Tuinstra for all The Luke Commission team