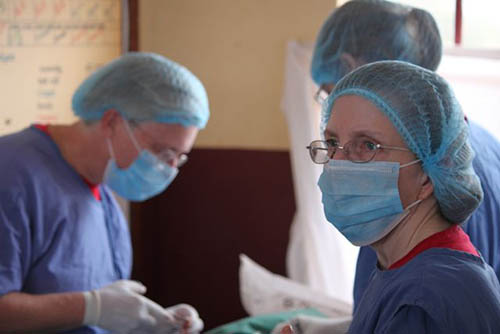 Many visitors from the United States and Canada travel to Eswatini to offer their time and talents to The Luke Commission.

Usually it’s for a month or less, but as a Liswati pastor noted: “No one comes here and is not changed.  Everyone sees how Christ has preserved us.”

Two of these dedicated visitors were Pastor Steve Nicodemus and his wife Dr. Margaret Bowden of Sandpoint, Idaho.

They spent two weeks with The Luke Commission in September, 2013.  Months later in 2014, they’re still talking about what they saw and learned.  Just ask them!

“Harry and Echo are not missionaries.  They are servants,” said Nicodemus.  “It was thrilling to watch all the Americans defer to the Liswati staff, giving them the opportunity to take leadership.  It’s much easier just to do things yourself.”

Continued Pastor Nicodemus:  “Relationships are more important than tasks, although the tasks TLC accomplishes are amazing.  I saw people practicing what they preach.  TLC does not allow triangulation.  They live the principle in Matthew 18: ‘Go to your brother.'”

Dr. Bowden agreed.  “What impressed me most is the no-complaining policy.  I wish we could replicate that everywhere.  I saw it make a world of difference.”

Although an obstetrics-gynecologist doctor for 30 years, Margaret said, “I learned much in the surgical unit.”

She noticed the American RNs and trained Emaswati are “willing to do anything in surgery.  They’re circulators and take care of everything.”

Margaret worked in a Mozambique hospital for a year when she first became a doctor, so TLC’s facilities and mobile surgical unit did not surprise her.  What did touch her was the flexibility of those working in the surgical unit.

“Those young women do everything from comforting patients in pain or those who are scared to taking out the trash,” she said.

As The Luke Commission continues to reach into the outermost corners of our adopted country with compassionate medicine, may all those who support this ministry on both sides of the Atlantic Ocean know they are valued and appreciated.

Saying thank you to all,