What are Rechecks? And Who Does Them? 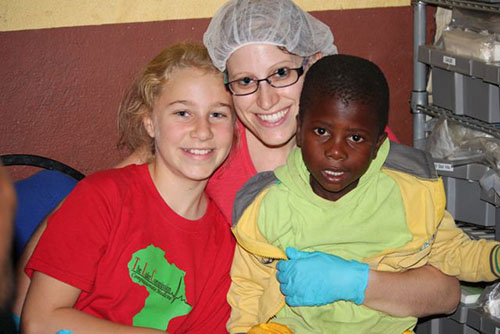 The Luke Commission’s nurses are a strange mixture of feminine sensitivity and toughness that can out-perform the most dedicated workers.

All day at the mobile hospital outreaches, the four nurses are part of the surgical team – gowned up, going from bed to bed, stitching, blocking, doing whatever needs to be done to give patients the best treatment.

This may already be common knowledge. What is not, or is not easily understood, is that even after late-night outreaches, one or two of the nurses will leave before 6 am the next morning to do rechecks.

“Rechecks” are follow-up treatments, usually of the boys and men who have been circumcised. Rechecks are done at two days and then seven days after surgery.

Rebekah Sartori, Melody Miller, Tiffany Schlueter, and Hannah Wray are the recheck troopers admired by all those on the ground here.

Like everything The Luke Commission does, only God could put all the pieces together to treat so many in a manner which would honor Him and truly help the patients.

But it takes stout-hearted personnel to return to an outreach site two or three hours away, intent on finding all those who need to be seen again by medical personnel.

Sometimes, the nurses do not get home until evening, only to prepare for the next day’s new outreach at a different location serving a different community elsewhere in rural Eswatini.

The nurses don’t complain, though. Instead, they find humor in unusual predicaments and rejoice when all the boys and men in a community have been “tracked down” and checked.

At TLC outreaches, team member Sipho Mabuza locates men with bakkies (pickup trucks) who agree to take the boys and men who have been circumcised home and then pick them up at various schools and homesteads on recheck days. Sipho negotiates responsible fees and pays the drivers in cash at the end of each transport day.

“We’re still working on the best practices to make all this happen,” said nurse manager Rebekah. “It works well when we remember to call the driver the day before we return to an outreach location.”

The nurses are accompanied by a Luke Commission staff driver who doubles as translator. Often, these young women with boundless oomph complete paperwork on the long drives, provided the roads aren’t too bumpy and they don’t drift off for a well-deserved nap.

Just for the record, here’s what each has to say about rechecks, off-the-cuff, not orchestrated, not even edited much.

Rebekah: “I get to see the boys’ faces and their personalities emerge. I watch the boys interact with each other. I love rechecks for these reasons.”

Hannah: “I enjoy getting to spend more time with the boys. They aren’t so scared of us anymore and let us see them as individuals.”

Tiffany: “Rechecks give us a chance to be in the communities more. It’s a more relaxed environment, not as ‘push, push’ as we are at clinics.”

Melody: “Rechecks are cool, because we see more of the character of Eswatini, and not just from those who have been circumcised but also from those who have received minor surgeries. They’ve had more time to soak in what has happened to them and how their health has improved. We hear appreciation resounding again and again.”

The four nurses sometimes take visitors and interested staff with them on rechecks. They willingly teach others and include them in recheck activities. If nurses need to consult about difficult cases, they contact Harry and Echo via cell phones using telemedicine.

However, the responsibility to see that patients receive continuous, compassionate care until they are healed falls on four young women who count it a privilege to serve Emaswati young and old.

by Janet Tuinstra for The Luke Commission team