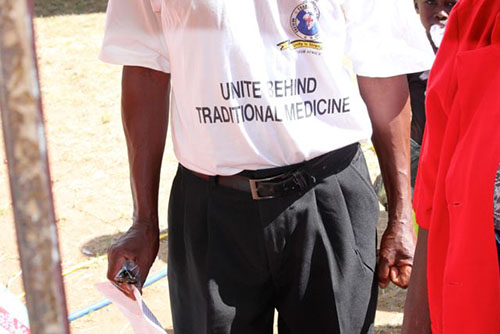 “Clinic days,” as TLC’s mobile hospital outreaches are called for short, start early and end late, but the joy and enthusiasm of serving rural Emaswati in the Name of Jesus Christ does not diminish as the hours pass.

One man stood in the long, late afternoon pharmacy line.  He quietly watched the activities whirling around him.

His white t-shirt sent a message:  “traditional healing is a basic right” declared the printing on his back, and “unite behind traditional medicine” adorned his chest.

Despite his position as a “sangoma” or “inyanga,” he was seeking medical help from The Luke Commission.  When his turn came, the thin 73-year-old man accepted seven medications with a shaky hand and tentative smile.

He had heard the Gospel and received a booklet about Jesus before seeing the doctor.  He’s a precious soul God still seeks to bring to Himself.  He desired health beyond himself.

Traditional healers often come to The Luke Commission’s mobile hospital outreaches to get medical help for themselves.  They may be reluctant but usually express their thanks.  Bridging cultures, bridging beliefs, all in the name of the Creator, that’s the order of any day for The Luke Commission.