Leens, Now More than Ever, On Board with TLC 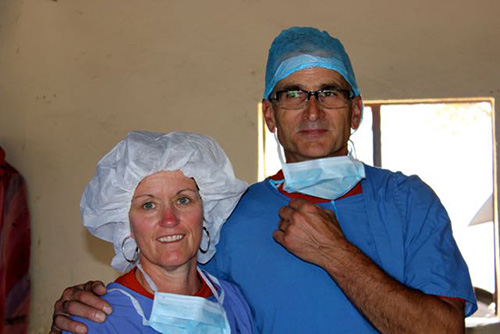 Leens, Now More than Ever, On Board with TLC

Folks ask Neal or Trudy Leen why they’d take time off from good jobs and travel to Eswatini to work hard at TLC’s mobile hospital outreaches, volunteering their time and resources to help sick strangers.

Each has a similar answer, which still puzzles many people but makes perfect sense to Neal and Trudy.

The Leens learned about The Luke Commission through their church, knew there was something special going on, and started supporting what Dr. Harry and Echo (PAC) VanderWal are doing in Eswatini.

“Spending time in Eswatini solidified what we already knew,” said Neal. “We’re just that much more on board.”

“What we saw and did is still unbelievable,” added Trudy.

The Leens participated in four mobile hospital outreaches in rural Eswatini. They worked in triage and even the male circumcision surgery room.

“Poking fingers was out of my comfort zone,” Trudy noted. “I’d never even taken blood pressure before. I remember thinking ‘I can do this, but it’s not what I thought I’d be doing.’ Outside I tried to look calm. Inside I was the one most afraid.”

Serving hundreds of patients in triage with the Leens was their daughter Amy Ostermayr, who with her husband lives and works in Germany.

“This was an authentic Christian experience, and our daughter experienced it with us,” said Neal. “That’s pretty special.”

Triage also is where the HIV tests are given. “After four in a row tested positive, I felt like I wanted to cry,” said Trudy. “I thought this is not a game. This is life – and death.”

Neal received “an eye-opener, that still blows my mind.”

TLC’s board chairman in Eswatini told Neal a story about an acquaintance who tested positive for HIV at a TLC clinic. He did not want to believe the results, so he tested twice more at different facilities. Finally convinced of his status, the man got up the nerve to tell his wife. She, in turn, admitted she had been taking anti-retroviral drugs for seven years because she was HIV +.

“Husbands and wives don’t even know each other’s status,” mused Neal, shaking his head in disbelief.

Emotions run high among those volunteering with The Luke Commission, even when they’ve prepared.

Neal said when he stepped off the TLC vehicle at his first outreach, he saw “all those kids in dry and dirty surroundings looking up at us expectantly, and I found it hard to contain my feelings. Even Echo said she still gets an adrenaline rush when the team first pulls into a clinic site.”

“I had read about the biggest clinics treating 900 patients, but I was still not ready for reality,” explained Trudy. “To watch the loading and packing and organizing that’s required the day before a clinic, and then to stay until 2 am to take care of every patient, that was still a wonder to see.”

The Leens of Priest River, Idaho, particularly enjoyed giving out SiSwati Bibles to Emaswati who live 10,100 miles away but need the same Jesus Christ.

One day as the TLC team was packaging pills, Trudy asked a Liswati staff member: “Didn’t we just do these pills a couple of days ago?”

The answer: “Yes, but these are worm pills, and we give them to everyone who comes to the clinics and their families.”

“I didn’t realize that,” added Trudy, “and was once again amazed at the depth of the services offered by TLC.”

At Trudy and Neal’s last outreach, they worked in the male circumcision department, cleaning up the beds between patients and putting away instruments.

“Many older boys realize how important circumcision is for their health, but they’re scared,” noted Neal. “I found myself in the recruit mode, wanting to encourage them to do it that day.”

The Leens listened to Echo talk to one of her patients as she performed the operation. He was 15 years old.

“Is your dad here?” she continued. “No,” answered the boy.

“Is he at work?” queried Echo. “No, he doesn’t work. He’s at home, sick.”
Echo then turned to Liswati staff member Sizwe and said, “Find out where this boy lives and get his father here.”

The Leens said the father did arrive for treatment at TLC’s outreach later that day.

“She went one layer deeper than she had to,” said Neal. “That was touching, ‘way cool’ as the kids say.”

Back at home, Neal and Trudy hope to convey to their congregation at Priest River Community Church in northern Idaho that everyone potentially has a spot in the TLC missions.

Trudy has joined TLC’s Board of Directors in the U.S. She also directs the annual Christmas celebration in Idaho. This year it will be Dec. 7. Harry and Echo briefly will return to Bonner County to speak to hometown supporters who have supported them since TLC’s beginning.

“Much can be done here,” said Trudy. “When God opens our eyes, He expects us to do something.”

“It’s so important for individuals in our church to support The Luke Commission financially. None of us realizes the ripple effect our donations can have on individuals being treated physically and spiritually in Eswatini,” concluded Neal.

(by Janet Tuinstra of The Luke Commission)