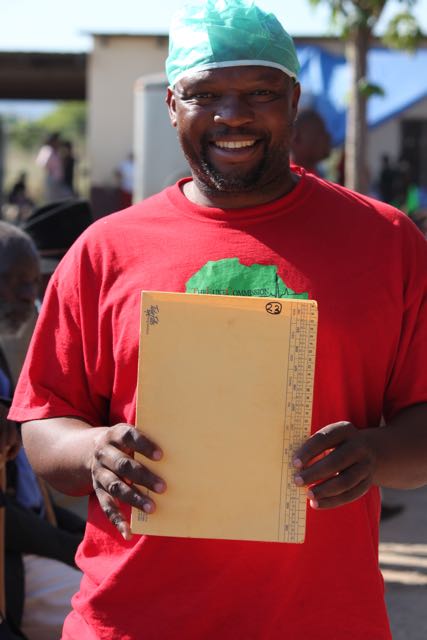 Practice what you preach. Learn before you teach. Put some muscle behind your words. Walk the walk. Action speaks louder than words.

That’s what he’ll tell you today with a big grin which turns into sparkling laughter.

…is now himself circumcised!

It happened at the last 2014 TLC outreach. How is the patient doing now? “Great,” Sipho says, “no pain since day 4. Only a little before. I know I’m not all healed until 6 weeks, but I am fine.”

Sipho’s spirit was pricked, poked, and prodded months ago. “I was telling the boys and young men that they needed to circumcise. But the ‘medicine’ I was giving them I needed to drink first.”

Early in the 2014 TLC outreach season, Sipho told the surgical team, “I will do this!”

He waited until the 73rd of 73 outreaches, so as not to miss any work. “I wanted to keep on recruiting,” he says.

When Sipho was explaining the benefits of circumcision—60% reduction in HIV transmission, hygiene improvements, and fewer STIs in adults—he realized his own hypocrisy. “I didn’t like when they asked if I was circumcised.”

Sipho admits he would try not to answer but found that difficult. “Many people are like Thomas. They want to see, have to see, to believe you.”

Now Sipho is talking to other male members of TLC staff. “They’re going to follow me,” he confidently declares. “No one pushed me. Only God. I will not push anyone either. But they will follow.”

It’s all part of the aggressive, don’t-give-up battle against HIV/AIDS.

by Janet Tuinstra, on the ground with TLC