TLC Focuses on the Needs of the Whole Country 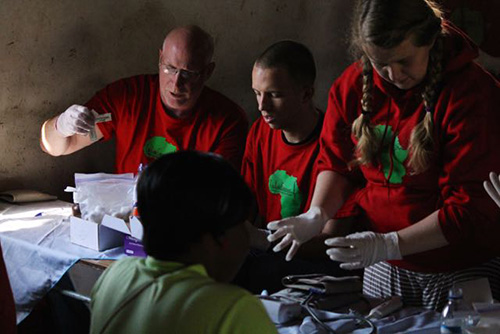 ​Joe Noonen, Mount Vernon Nazarene University’s chaplain, likes to fly under the radar and not talk about himself too much or too often. But he will talk about The Luke Commission, as often as possible and to as many as will listen.

​“The Luke Commission is a quality organization focusing on the needs of a whole country.” And that’s just for starters.

“I watch firsthand how The Luke Commission strives to give excellent healthcare to the poor and the sick of Eswatini and how they continue to seek more effective ways to carry out that ministry.”

​Noonen says: “I count it a privilege for my life to cross with Harry’s and Echo’s lives. I’ve seen lots of people serve Jesus with all their hearts and energy, but they did it by themselves. They didn’t listen to advisers or engage the people they were serving, so they didn’t last.”

​He adds, “Harry and Echo don’t try to do it all by themselves. They seek advice and counsel from others, and they listen to their Liswati staff.”

​Noonen himself has great respect for TLC’s Liswati staff. “They continually remind me of the beauty that comes from individuals who yield themselves to Jesus Christ, the church, and His kingdom in the world. They show me what graciousness and humility look like. They make room for students with a million questions and allow us to enter into service with them.”

​As for the contributions of Americans who serve with The Luke Commission, Noonen notes, “We combine the culture we bring into Eswatini with the Liswati culture. TLC has become a culture of its own, richer than either culture alone. The Emaswati are not forced to step into patterns foreign to them. TLC hears their voices.”

​In 2013, for the third year, Noonen took 10 students from Ohio’s Nazarene university to Eswatini to work with TLC on a short-term mission trip. Now that the students have returned to their homes in North America, they are being asked “How was it?”

​“I tell them it may take them weeks or months or years to unpack everything they’ve learned and experienced,” laughs Noonen. “They must accept the fact that no one except the team members themselves can truly understand the extent of need in Eswatini, the focus of the TLC staff, or the bigger picture. But they must be gracious and merciful to those who don’t understand.”

​Noonen continues: “On the other hand, I talk to the students about the ‘never-ending pie.’ We’ve tasted a slice of TLC, but need to tell the TLC story to others so they can get a piece, too.”

​Duties at the university made it necessary for Noonen to pass the TLC team leadership to another. Reluctantly, he did not accompany the MVNU team to Eswatini in 2014.

​A staff member at Mount Vernon Nazarene University for 19 years, Noonen says the university has a “deep respect for Harry and Echo” and what The Luke Commission is doing in Eswatini. “They function with excellence.”

Before Noonen came to MVNU in 1995 to serve as the director of mission and ministry opportunities, he ministered in communities where poverty and suffering were a daily reality. He and his wife Raeschell served in the north corridor of Toledo from 1980 to 1986.

Again, Noonen prefers to remember what his wife did there. “She started a pre-school and organized prayer groups. I like that verse where Jesus says don’t let your right hand know what your left hand is doing.”

​As a couple, they took in five foster children.

​After completing seminary in Kansas City where he also was Nazarene church youth leader from 1986 to 1989, the Noonens moved to New York City, where he pastored a multi-ethnic congregation.

​Today, the Noonens have five young adult children of their own – one son and four daughters. The entire family supports and prays for The Luke Commission.

Raeschell is the administrator at a facility for individuals with developmental disabilities. Joe serves on TLC’s American Board of Directors.

​“If it weren’t for the quality of students I teach and my family, I couldn’t travel all around the world. My family realizes there’s something bigger going on than any of us can see. I appreciate that.”

​And Chaplain Noonen appreciates The Luke Commission. “Others need to know TLC is an incredibly effective ministry.”