Sandpoint Team Will Not Forget…(Part 2) 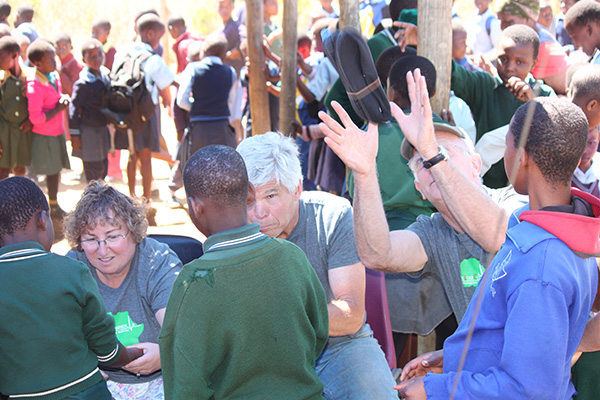 From a heart attack to heart-gripping stories, a team from Northwest United States has much to say about their time with The Luke Commission in Eswatini.

Six days before Larry Ellis was scheduled to leave home in spring, 2014, to work on the Miracle Campus, his body altered his best-laid plans.

“When my chest and left arm went numb, I asked God to take it away, but He didn’t,” Larry said. “I died for 30 seconds on the operating table. They had to use paddles to bring me back.”

When Larry and his wife joined the Sandpoint team later in 2014, Larry said he thought about that heart attack “all the time. It was God’s perfect timing. I probably would not have lived if it happened anywhere else. And this time, Diane could come with me.”

A retired postmaster, Larry especially relished fitting TOMS shoes on school children who attended TLC outreaches by the thousands. “I was surprised at how many kids don’t have shoes. I wish I could find a company that would donate socks,” he said.

“Everything that goes on during outreach days and non-outreach days is so organized,” he noticed. “I’m glad I have supported TLC over the years and will go back home to do more.”

“TLC is empowering local Emaswati. There can’t be anything better than that. Emaswati are smart and capable but, of course, need training. That’s people management,” Kody said. “You never know what will happen, but you have to invest in people even if they leave. TLC is doing that.”

Viewing the Miracle Campus development, Kody said: “The team is raw, but I could see them improving every day.”

The Van Dyks, Kody and Teri, went to the Congo, then called Zaire, 25 years ago. “Africa has a certain draw,” he laughed, “so we had to come back.”

“You can’t respect what TLC does to the full, until you see it,” he continued. “We saw God’s call on The Luke Commission.”

At outreaches, Kody particularly enjoyed looking at the “kids’ faces when they received new shoes, especially the faces of the young girls, who don’t get that kind of attention often.”

Paul ZeBarth, a systems analyst at Boeing in Seattle, met Harry and Echo VanderWal seven years ago and started supporting TLC. “God gave me a desire to come and see the whole operation.”

And after he saw? “I admire the compassion and drive you all have,” he replied enthusiastically. “My favorite part was looking into the eyes of the little children. It was special to take a child’s hand, to try to get a smile, and to fit shoes on his or her feet.”

Paul was pleased but surprised to be able to work with patients. “I didn’t expect to test for HIV or go into surgery, but I’m glad I was allowed that privilege.”

“This mission trip will not end when we leave,” she insisted. “We will just be getting started when we get home. We will start fires all over our territory, telling others about TLC.”

A graphic designer who owns her own firm, Teri smiled her way through outreaches and new situations. “People working here are wonderful, from the drivers to the international staff. Hardworking. Efficient. Praying through difficulties.”

Teri was partial to the children and older men in triage. “I tried to get them distracted, so they didn’t see when I poked their fingers.”

A school teacher for 20 years, Diane Ellis noticed much about the rural Liswati schools used for TLC’s mobile hospital outreaches.

“It’s incredible how many people live on homesteads out in the country,” she noted. “They walk miles and miles morning, noon, and night. A half hour after our vehicles would leave for home at night, we would pass Emaswati walking home in the dark with no lights.”

Diane said, “I’ll tell Americans how lucky they are to have technology and so many conveniences. Here there are no school buses, only meager books, old chalkboards, but the students are happy and don’t complain.

“At home, kids dump two-thirds of their lunch in the trash, but here if a child has half an apple, he celebrates,” she continued.

“I’m so glad we came and am ready to come back,” she said of herself and her husband Larry. “Before we came, we were so concerned about everything. I don’t know why.”

Ken Smith, pastor of First Baptist Church in Sandpoint, preached to the whole staff on the first anniversary of the Miracle Campus dedication.

Pastor Ken liked the “responses on their faces. They were with me. Eager listeners. They gave their attention to God, and we sought Him together.”

Ken valued many aspects of the outreaches and the people behind them. “I appreciated the patience of the Liswati patients throughout the day.

“I was impressed with the TOMS shoe company for giving TLC all those shoes. I noticed the advanced technology in the x-ray department and thank the donor that made it possible.

“I watched a whole rural school be turned into a well-organized hospital fairly quickly. I saw the staff handle planned and unplanned events as normal.”

With a pastor’s heart, Ken struggled with “the disparity between rich and poor, “beautiful homes and poverty dwellings right together. But we know in Christ’s eyes, we are all His equal children.”