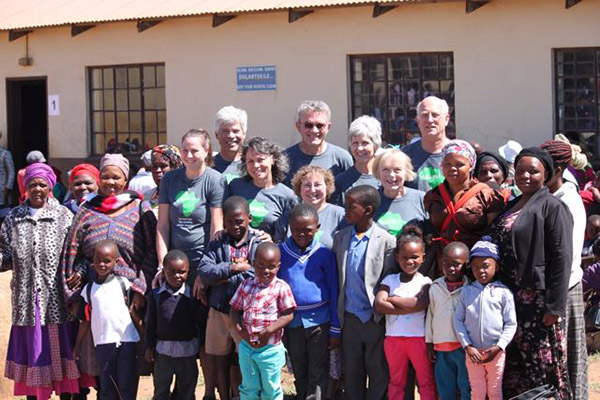 Eleven adults from Idaho and Washington, many of whom have watched TLC “growing up,” have experienced the touch and thrill of outreach participation.

These Sandpoint and Seattle team members boldly declare that they’ll never be quite the same after visiting Eswatini. In their own words, here’s why that’s so:

“This has taken our hearts. We won’t forget. We have many stories to share with lots of people,” softly shared Debbie Van Dyk at morning prayer circle the day the team left.

Debbie helped record statistics during her TLC visit. “The curve was the same, always. Not nearly as many people between 20 and 40 years as in other age groups. I heard about HIV taking almost a whole generation. Now I see.”

A Sandpoint engineer who owns her own company, Clearwater Engineering, Debbie closely watched TLC’s copious endeavors. “I’m a fix-it person. I’d like to build the PET carts and grade some land on the Miracle Campus,” she said. “I could keep real busy here.”

“The Luke Commission integrates mission trips better than anyone else. TLC welcomes, encourages, and uses teams, even though they are not necessary to the work.”

Peggy was touched by the poverty: ”What we read or see in photos can’t compare,” and by sadness, “When I tested three children for HIV, two came up with two lines, indicating positive.”

More passionate than ever now, Peggy said she will “do what I can to raise more funding. I have a business focus and like to work on the big picture, rather than the day-to-day. But I really needed to see first.”

Jimmy ZeBarth of Seattle joined the Sandpoint team with his wife, Teri, and his brother, Paul.

A diesel mechanic at home, Jimmy was surprised at the Miracle Campus. “The time frame from when the land was purchased and how much has been done is fabulous–-so much usable equipment and buildings.”

Jimmy didn’t stop with the physical, however. “I enjoyed communicating with the Liswati staff and going straight to whether they believe in Jesus.”

One young man who wanted to marry, but first needed to save money to buy cows, was building a little hut and “rejoiced if he had one candle to read his Bible by,” Jimmy remembered. “He walked two hours to work at the Miracle Campus. I loved his attitude of gratefulness for the smallest things.”

Jimmy also was impressed that “all the workers were included in worship. Evangelism and discipleship are keys to TLC.  Preaching and teaching for everyone while on the clock may not be normal for Eswatini (or the US), but it’s normal for The Luke Commission.”

Nikki (Fitchett) Radonich planned ten years for her African missions trip. “I’m so grateful for the opportunity,” said the young Bonner General Hospital nurse who energized the whole team with her desire “to engage fully in what’s happening here. The Liswati people may be stoic, but they are strong, free to smile, with a gentle strength that touched my heart.”

Nikki loved going to the hospital in Manzini. “Laboring women were incredible. They labored outside quietly, and unless you knew, you’d never know. Having a baby in Eswatini? Just do it. No fuss,” she noted.

“I could see the sadness in one lady whose baby had died. She was not seeking sympathy, although her face showed she did appreciate our prayer.”

At outreaches, Nikki often worked in Room 2, triage. “I came to see it all, but soon realized that was impossible. I just had to stand back and marvel. “

One woman came to express her gratitude after having a tumor removed by TLC the previous year. “I totally missed that, even though she was right in front of me,” Nikki laughed. “Staff members know those moments happen even when many don’t recognize them. That’s what makes a team. No one can be there for every story and every person, but someone is.”

Longtime labor and delivery nurse Jeanie Smith noticed how the mobile surgical unit was set up and “functioned in such an orderly manner. My heart went out to see boys walk in for their first surgery ever. I wanted to comfort them but didn’t have their words. I appreciate the Liswati translators reassuring them throughout the procedure.”

Jeanie continued: “I thought about how each man or boy agreeing to circumcise was affecting so many unknown others…Each one was taking a significant step to reduce HIV in Eswatini…”

As Jeanie observed all the children at the outreaches, she wondered “how many of them had been orphaned by HIV.”

“I was awed how clearly effective TLC’s strategies have been and how God has opened doors probably never dreamed of,” Jeanie said. “TLC has everything needed to get people on ARVs (anti-retroviral drugs) the next day. I’m amazed at the progress that has been made and the growth that’s on the horizon.”

Jeanie loved seeing the communities gather for an outreach. “We would not see many people or homesteads on the way. All of a sudden, we’d come upon a crowd of a thousand or more.”

Visibly moved, Jeanie said, “It’s been a huge blessing to have been connected with TLC in the early years, and then lay eyes on what has happened in a short time.”