Visiting the Old Highlights Wonder of the New 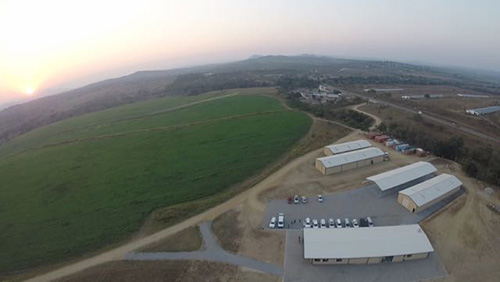 Looking back heightens our appreciation for the present. This week The Luke Commission team in Eswatini took an historical “field trip.”

The staff visited the rented headquarters where TLC began. Eyes were opened and hearts were touched!

Only a handful of the 90 team members knew much of TLC’s beginnings. Only a few had a real perspective of how far God has brought The Luke Commission since the move to the Miracle Campus two years ago.

Even team leaders were inspired. “It’s so small,” Thulani said of the original TLC campus. “I thought you had moved from another big campus.”

TLC staff was loaded into three bus-trucks (two Sprinters and a Quantum for those familiar with African vehicles) and traveled 25 kilometers from Sidvokodvo to Manzini.

“We knew this was something we should share with our staff, especially since the team is growing every day, every week,” said TLC Staff Development Pastor Brian Schmelzenbach. “It was a flood of memories for me when we drove up to the gate.”

Pastor Brian continued: “When I looked into the eyes of the staff, I saw saw genuine looks of surprise, even shock, for where it had all started.”

TLC Construction Manager Mandla wanted to relocate the house to the Miracle Campus. Though not possible since TLC was simply an appreciative renter, in his enthusiasm Mandla proclaimed: “Let’s pray to our Lord to keep the house forever, so that everyone can see it. Yes, it is a miracle, indeed.”

New staff member Mlungisi suggested staking out the size of house and property in a corner of the Miracle Campus, as a visual reminder of how Jesus has brought compassionate medicine to rural Eswatini.

The grass was tall and the house unoccupied since TLC left.

The few “old” staff members remembered vehicles parked all over the yard, grass that couldn’t grow since most tasks had to be done outside, 40-foot shipping containers spilling over with medical supplies and equipment, a garage serving as a work area and storage-to-the-ceiling, team members communicating without cell phones or i-phones, administrative staff using computers on their laps anywhere and everywhere, the VanderWals living where they worked.

Tholi reached her arms out to show the size of the kitchen. “We could almost touch the walls from the middle,” she said, “but we made so many good meals in that kitchen. We worked and laughed and served God.”

Logistics Manager Sipho, who has not always been a leader, talked passionately about the visit to the past:

“Many people did not know where TLC came from. They saw lots of cars and lots of resources. We would tell them, ‘No guys, we started from the ground,’ but sometimes they thought we were lying and just telling a story. But when they saw where The Luke Commission worked for eight years, they believed!”

Since returning to the Miracle Campus, Sipho had noticed staff members “talking right and left. Even the construction crew understands now. We will see fruit from that visit. No one can complain now.”

Asset and Project Manager Joe admitted that originally he thought the field trip would be a waste of time.

“But it was a great morning,” Joe said later. “Just remembering what had to be accomplished in that space made me realize anew what we have now. When we pulled back onto the Miracle Campus, it was just peaceful.”

Mbongseni observed, “It’s a pleasure to go to ex-TLC home. From what I’ve seen in Manzini, the Miracle Campus is a miracle, indeed.”

Thobile put TLC in the middle of Scripture: “We are a chosen generation, a royal priesthood, a holy nation, a peculiar people, God’s chosen ones…We are moving to greater heights. He has not brought us this far to leave us. This is really amazing! We are grateful, dear God, for everything.”

“Surely the just shall live by faith,” declared Phindile. “I am grateful to be a part of such an unfolding miracle!”

“Considering what’s behind humbles us, and seeing the present shows only God can provide so much and keep opening hearts to support TLC,” pondered Senzi.

The VanderWals were in South Africa the morning the veil came off so many eyes, but Echo noted: “It’s a wonderful reminder of the faithfulness of our huge God. We must never forget.”