Boy Bitten by Snake While Fishing – Just the Beginning 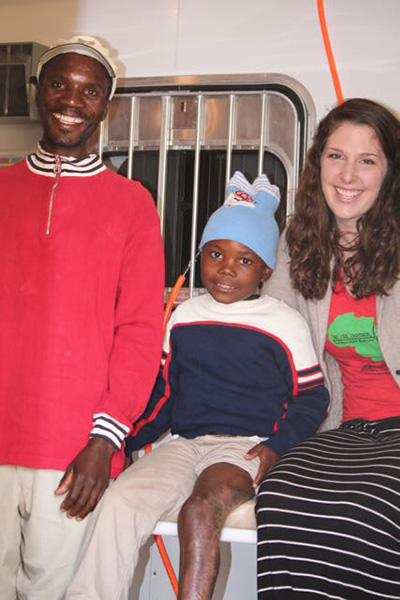 The Miracle Campus is so large and so full of activity that it’s easy to miss individual patients coming and going for continuous treatment.

But they are there, and they are grateful.

Take the “snake bite boy” and his devoted father.

A morning Iast December, 8-year-old Sinethemba Mbhamali was fishing in a river with a friend.  Suddenly, a snake showed its head above water and then disappeared.  Before Sinethemba could move, the snake bit his ankle.

That was the beginning of an eight-month saga, which could have resulted in death or the loss of his left leg.  The snake probably was a cobra or another poisonous snake that inflicted cytotoxic venom, which kills the skin cells.

Sinethemba did not immediately go home, because him mother was dead and his father wasn’t returning until that evening. His grandparents had died, too.  Sinethemba moved to the riverbank and continued fishing.

The next morning Solomon carried the feverish and injured boy to the closest clinic.   He was sent to a small hospital “far, far” away, his dad said.  Eventually, skin grafts were taken from his right leg to repair the damage that had spread up from the left ankle to above the knee.

Three months ago, neighbors told Solomon that The Luke Commission was coming to their rural community.  “I knew my boy needed more help,” Solomon said.  Sinethemba’s leg was infected and did not have any dressing on the wound.

The medical team immediately gave Sinethemba antibiotics, cleaned and bandaged his leg.   TLC has been treating Sinethemba ever since.  He and his dad travel to the Miracle Campus every week or two, where nurses monitor the healing process and cover the wound with new dressings.

Father and son leave their homestead at 5 am to arrive on campus about 10 in the morning.  TLC pays for their transport.  During the first trips, Solomon carried his son on his back.

“Not getting anti-venom soon meant this boy was headed for a poor outcome,” noted Dr. Harry VanderWal, “but not nearly as poor as it was, if infection and months of inactivity due to pain could have been avoided.”

On the tenth trip, the medical team commended Solomon for his diligent care.  Nurse Hannah Wray said Solomon made sure his son did stretching exercises to improve strength and mobility of his damaged leg.

Solomon explained that the whole community “uses that river,” although Sinethemba has not been fishing since the day he was bitten.  He had to drop out of school as the infection and pain took hold of his life.  However, all that has changed.

“It’s good now,” Sinethemba said.  He is learning to walk on both legs again and to stand straight again.

Solomon’s two younger children died in 2010 and 2013, and then his wife passed away.  He said, “I am grateful to TLC.  He is my only child, and I want him to be well so he can go back to school and shine.”

May The Luke Commission help other Liswati children “shine.”

PS.  The Luke Commission has been entrusted with a good supply of anti-venom for snake bites, which must be administered as quickly as possible after snakes bites.  Anti-venom medication requires refrigeration and delicate care – part of TLC’s “comprehensive” healthcare.