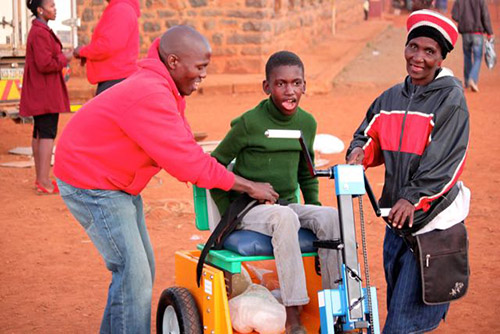 Her boy needed help. She needed help. Meli’s mother had heard The Luke Commission was coming to a school close by her rural community in Eswatini, southern Africa.

Khanyisile Dlamini would walk to school with her 15-year-old son Meli on her back. He was small for someone that age, but Khanyisile was petite, too. Her precious load was heavy.

“I heard about a special cart The Luke Commission gives from America,” she said later.

Meli was healthy when he was born. But at age 5, he became ill with an infection that apparently caused brain damage. “After it happened,” Khanyisile explained, “he could no longer walk or talk.”

Fortunately, Meli was still able to sit up and use his arms and hands. But his mother was never able to get him a wheelchair.

When TLC’s staff member assembled the PET, mother and son watched. “Thank you very much. Thank you to the people in North America for making this for my boy. Now life will be good for him.”

Khanyisile is not married, although she has three other children. Her parents used to assist in the care of her children, but they have died. Meli has never gone to school.

How does Khanyisile feed and clothe her children? She shrugged, when TLC’s staff member translated this question into SiSwati. “Anyone willing to help, even my brothers, do.”

The she smiled, “But this cart is better than food.”

After being instructed how to care for her boy’s PET cart, how to engage and to release the brake, she began to teach her son. Together they left to walk – and to ride home.

by Janet Tuinstra for The Luke Commission and with gratitude to the PET volunteers and donors in Wheatfield, Indiana