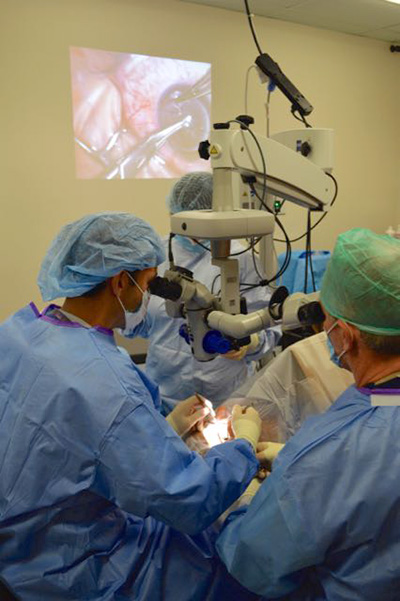 A series of God-orchestrated events resulted in a 42-year-old Liswati man receiving a cornea transplant during The Luke Commission’s first surgical weeks of CARES, or (Comprehensive and Restorative Eyecare Services).

It was a wonder to behold. Hard to explain. Actually cannot be explained. It was supernatural.

Here’s the story, at least the part we can see.

…Dr. Alex Cohen, an ophthalmic surgeon, made his first trip to Eswatini to be part of TLC’s three-week marathon of cataract and other eye surgeries. He performed the transplant on September 3, 2015. He also performed more than 100 cataract surgeries in one week.

…Louis Abrahams, the recipient, began having eyesight problems in his early 20s, headed toward eventual blindness.

“I have been praying for a miracle, on and off, for the past ten years. However, often during this period, my family prayed for healing for my eyes, a lot more fervently and consistently than I did,” Louis said in a letter of gratitude to the family who donated their beloved’s cornea.

“I even began to think that a miracle, for me, was a distant myth,” he explained in the letter. “And then…when I least expected it, at a time I was not praying for it, when it was the furthest thing from my mind, God moved unexpectedly, in a miraculous way.”

…The Iowa Lions Eye Bank had supplied corneas when Dr. Cohen was an eye surgeon for the Dean McGee Eye Institute in Oklahoma City. From Eswatini, Dr. Cohen called his friend at the eye bank. Corneas go though a multi-day screening process, and one was in the final stages of testing. Dr. Cohen just had to wait for an email with offer details, which came a few hours later.

…The medical and support team of The Luke Commission at the time, on the ground in Eswatini, were treating hundreds of rural eye patients brought to the Miracle Campus. Why not add Eswatini’s first cornea transplant to the surgeries already scheduled?

…Partners cbm Canada (Christian blind mission of Canada) were in Eswatini to lend financial support, present and future, to the new CARES program. Said one cbm Canada visitor, a retired veterinarian who has directed many overseas humanitarian projects: “This trip was one of my most memorable times – inspiring and fulfilling and more.”

…The mother and sister of a TLC nurse hand carried the cornea from Iowa to Sidvokodvo with 12 hours notice that they were flying to Eswatini.

…Even a Fed Ex driver, who probably had no idea he was involved in something so dramatic and life-changing, delivered small crucial surgical tools to an Iowa farm, minutes before the carriers were to leave for the airport.

…TLC’s executive directors thought “why not?” They made initial contacts, lined up details, and trusted God to work it all out.

…Many more, who know nothing is impossible with Him, prayed. The eye bank even donated the cornea.

So, how did it all happen? Two hours before the carriers were to board the plane in Iowa, they picked up the precious cornea. A Luke Commission driver met them 22 hours later in Johannesburg, South Africa.

The cornea, in a small, inconspicuous ice chest, arrived at Miracle Campus at midnight. The next morning at 7am, the patient was prepped. Then Dr. Cohen began the delicate surgery. “This is a great cornea,” he noted.

Said Louis in his letter to the donor’s family: “Many people, some of whom I didn’t know, responded to assist me, just a normal man, in a tiny part of Africa who had a need of a cornea transplant.”

A few days after the surgery, Louis noted, “…initial tests have been very positive. I was able to see five fingers about 50cm in front of my face, a day after the operation.

“Thanks again, for this miraculous gift of sight, that I know will improve the quality of my life. I will be eternally grateful that someone cared enough to donate a cornea, just so that I can see.”

And we at The Luke Commission thank all who participated in any capacity, anywhere, as CARES begins.