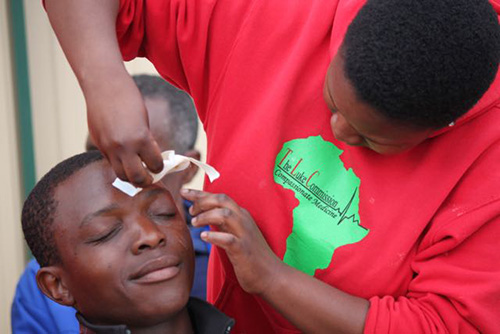 “My father told me to bring her, because she doesn’t see well,” said Ndumiso. “I knew my sight was failing quickly, but doctors had told me they could never make me see again.”

Ndumiso continued: “I heard about The Luke Commission and that many people were being helped. Inside I wondered if this was a chance for me, too. But I didn’t have an appointment. Then I found out I didn’t need one.”

A juvenile diabetic since age 14, Ndumiso was blind in one eye due to a dense cataract, while a cataract is forming in the other eye. “I could only see a little in front of me, and it was getting harder and harder to see colors.”

His sister Ebenezer suffers with vernal keratoconjunctivitis, a severe allergic inflammation of the eye, which may disappear when she’s about 18 years old but can cause near blindness until then.

Ebenezer received an injection in each eye which should improve her eyesight for two or three months.

Her big brother received new hope, renewed joy, when the large cataract was removed! Before the surgery, however, he was nervous.

His great-grandfather and grandmother each had unsuccessful eye operations. “When they came home, they were blind. Two generations! Who knows what will happen to me? Only God knows,” he mused the evening before his surgery day. “But this is a wonderful opportunity that I must try.”

Dr. Alex Cohen, who performed the surgery, said he was “willing to take on the hard case even though the outcome was unsure.”

When the patch was removed from Ndumiso’s eye the morning after surgery, his instant grin and enthusiasm for life spread to all those watching. He jumped up and hugged the Canadian man whose deceased brother had donated funds for the microscope necessary for the cataract program.

It was a joyous moment, as were those in the following hours when Ndumiso marveled at his good fortune. “I have no words to thank everyone I now see around me who has made me see again. I thank God who has sent these people to me and to many around me.”

Although Ndumiso now lives with his father and mother and four younger siblings, he was graduated from high school in 2010 but could not see well enough to work at most jobs. “Before I just dreamed, but now I can live out my dreams,” he said.

“We try to put ourselves in each patient’s place,” said Echo VanderWal, TLC’s co-executive director. “If I were blind I would say, ‘Please, please make every effort. The worst that can happen is I will still be blind. But if the best happens, imagine the change in my life!’”

Ndumiso applied for a job with The Luke Commission, interviewed, and was on the job two weeks after his miraculous recovery of sight.

“It’s a big challenge to work here,” he said with a smile that remains on his face most of the day. “We need to be very cautious.”

Those cautions, he explained, range from how to talk to patients getting ready for surgery, how to explain to parents and patients what will happen, and how to make sure all information is gathered and documented.

What about his juvenile diabetes? How is he handling that these days?

“When my condition was discovered eight years ago, I was so sad and very angry. I wondered why this would happen to someone at such a tender age.”

Recently, Ndumiso learned that Jesus told his disciples in the biblical account of John 9 that they were asking the wrong question. The disciples asked who had sinned that a man was born blind – the man or his parents. Jesus answered that the man had not done something wrong, but God wanted to let His glory shine through that man’s weakness.

“I accept my diabetes now. And I can see once again!”

P.S. The Luke Commission’s medical staff is now helping Ndumiso to manage his diabetes (which was not well-controlled previously), and requires giving himself daily insulin injections and monitoring his blood sugar and eating habits.