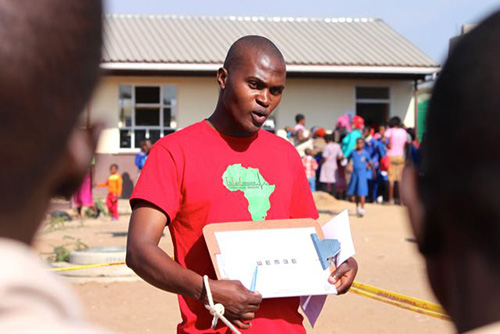 We didn’t know why Sibusiso always expresses such happiness. He isn’t simply cheerful but overflows with jubilation even at the end of a late-night TLC outreach.

Then we heard his story – the story of an employee who says he sometimes feels “like crying when I think about how God brought me to The Luke Commission.”

At age 26, Sibusiso Simelane had never been officially employed after he was graduated from high school, although he wanted a real job. He lived with his mother, two sisters, and a brother in rural Eswatini, where most Emaswati live without transportation and opportunities.

“On the radio I heard about The Luke Commission going to this place, that place, then another place giving wheelchairs and medicines and eyeglasses. For free. Free is not usually the way in Eswatini.

“I thought, I want to know these people,” Sibusiso remembers.

Passing Sidvokodvo one day on public transportation, he noticed the Miracle Campus sign on the highway. “Are those the people?” he asked himself. “I couldn’t stop that day, but I started praying for The Luke Commission.”

Next time he passed that way, he made a point to stop and ask a local resident, “Is this the only Luke Commission, or is there another one?”

“Those Americans have come to help those who are less privileged and sick in the rural areas of Eswatini. They work with many of our Emaswati,” the resident told Sibusiso.

“I wanted to apply to work there, to be part of that home, that family,” Sibusiso says today.

He wrote, by hand, a curriculum vitae (resume). “I wanted to type my CV form, but that cost money I didn’t have.”

(A couple of years previously, Sibusiso had helped a neighbor build his home. The job completed, the neighbor asked Sibusiso what he could give him as payment. “Don’t give me money that just disappears,” he remembers answering. “Could you send me to driver’s school, so I can get my public driving permit? That will last forever and someday maybe will help me get a job.”)

But how to get his application to the Miracle Campus? That presented another challenge.

Two semi-truck drivers gave him lifts, something that had never happened to him before in a country where most walk and seek rides from others, usually paying.

“I just kept praying, and God sent those men.”

Hours later when Sibusiso arrived at the Miracle Campus, the security guard at the gate said Sibusiso could not go to the office without permission. The guard said he would pass on Sibusiso’s papers.

Knowing that applications elsewhere were “often thrown away when not delivered in person,” Sibusiso was momentarily discouraged. “Then I prayed again, saying God, you know my family and where I come from. Please get my CV to the right people.”

Slowly, Sibusiso made his way back to his homestead. “I just kept thinking about the message on the radio about The Luke Commission giving many things for free. I just wanted to be part of that family,” recalls Sibusiso.

A week later, Sibusiso received a cell phone call, asking him to come the next morning at 8 for an interview and driving test.  They had openings for drivers.

Leaving home at 4 am the next morning, Sibusiso arrived at the Miracle Campus at 7:30. “God sent more truck drivers to help me,” he says.

After the interview, Sibusiso was the last of six men to take a driver’s test. TLC was looking for drivers, especially.

“My heart was beating fast when Mr. Joe was testing me. I was so happy when he told me I passed.”

Sibusiso waited another week. The call came, asking him to be at the campus at 5pm the next day to prepare for an outreach the following day. A one-day trial.

“Then I got another call, asking me to come for an extended two-week trial. I was excited.”

Just one big problem:  Sibusiso had only 5 emalangeni (less than 40¢). He needed E160 to ride on public transportation (kombis). “I couldn’t take the chance of being late.”

He asked his mother for help, but she didn’t have any money either.

“Take my fattest chicken and sell it,” she suggested.

With the live chicken under his arm, Sibusiso started walking, offering the chicken to everyone he met. No one wanted to buy it.

“Then I met a rich man who listened to my story and said he would buy my chicken. He gave me E200, wished me luck on the new job, and then handed the chicken back to me.”

“You have E40 more than you need,” exclaimed his mother when he returned home, “and I still have my big chicken!”

Sibusiso packed a few toiletries, a little food, and a change of clothes and set out the next morning.

Following the two-week trial period when Sibusiso attended several TLC outreaches and worked on the campus, management told him: “You are not going anywhere. We would like you to work for The Luke Commission.”

Sibusiso remembers thinking: “I have a new home now. My mother, sisters, and brother will be so happy. I’m not just a son, but a father. now. I can take care of my family. This is all a miracle.”

And since then? “I want to learn whatever anybody wants to teach me.”

At outreaches, he has worked in Room 1 registering patients, in eye screening for children, and more recently in recruitment for male circumcision. He drives a Sprinter truck-bus to and from outreaches with staff and supplies, while the nurses count on him to drive them to surgical rechecks.

Day by day, Sibusiso does not talk much about himself. He listens and then bubbles with enthusiasm about others. He talks about Jesus and how He has blessed him and The Luke Commission.

“What God is doing for the people of Eswatini through The Luke Commission is still hard for me to believe. And to be a part, I don’t have the words to say how blessed I feel.”