New-Style Mobility Cart Given on Roadside 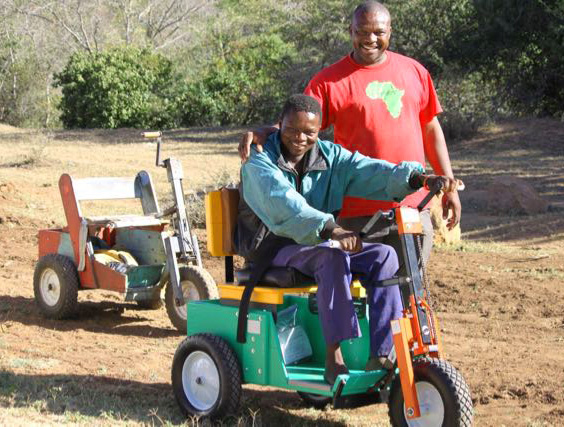 He waited patiently that day on the roadside. He had been waiting patiently for three weeks. He trusted TLC, but he was a little anxious and definitely excited.

“When I saw you coming, I knew you were the Good Samaritan,” Thathel said. “You had come to help.”

That “help” came in the form of a new-style cart from Mobility Worldwide. A team from Indiana builds and donates these carts. TLC just that week had received a new shipment.

Thathel “drove” to a TLC outreach earlier that month in the vehicle he received two years ago. The cart allowed him the freedom to move around and to take care of himself. Thathel said he felt like a man again. At this year’s outreach, a TLC doctor agreed that Thathel could have a new cart as soon as they arrived in country.

Thathel has not walked since he was 24 years old. First his legs started to cramp. Then he got sick, and his legs “stopped working.” Now at age 35, he is on anti-retroviral medications and looks quite healthy. His arms are still strong – a perfect candidate for a mobility cart that uses upper body strength to move the cart.

Thathel needed new transportation since he had put so many kilometers on his old cart – at least five kilometers every day!

The new carts from the Mobility Worldwide affiliate in the adjoining towns of Demotte and Wheatfield, Indiana, have been remodeled to be sturdier and definitely more colorful.

Each of the 22 Mobility Worldwide affiliates builds it own carts. Standards are high and uniform, but Mobility Worldwide has taken their style to a new level. Every cart is put together and tested before being taken apart again and boxed for shipment overseas. Extra care is taken painting all the wood parts.

“I was looking for a good blessing but didn’t expect the new cart to be that nice,” laughed Thathel. “I will use my old one at my homestead. But when I go to church, I will use my new one. I am proud.”

A cousin, who had accompanied Thathel to drive the old cart home, helped the disabled man climb into his new cart.

“I would like to thank the people who made these chairs in America,” Thathel said as his cousin snapped the seat belt. “And I thank almighty God that he has let me see people with good hearts in The Luke Commission who come to me.”

When necessary, Thathel said he will use the parts on his old cart to keep his new cart in good repair. He painted Toyota on the back of his old mobility cart, but smiled when he said now he has a Mercedes Benz.

Thathel lives with his parents. He never married but has two children, a son age 12 and daughter age 6. His girlfriend and mother of his children died last year.

“Praise the Lord for giving The Luke Commission the power to help others. May it not stop with me. May others get help, too.”

That power comes from above and from partners such as Mobility Worldwide (formerly PET International) and Free Wheelchair Missions. We are privileged to meet these grateful recipients.