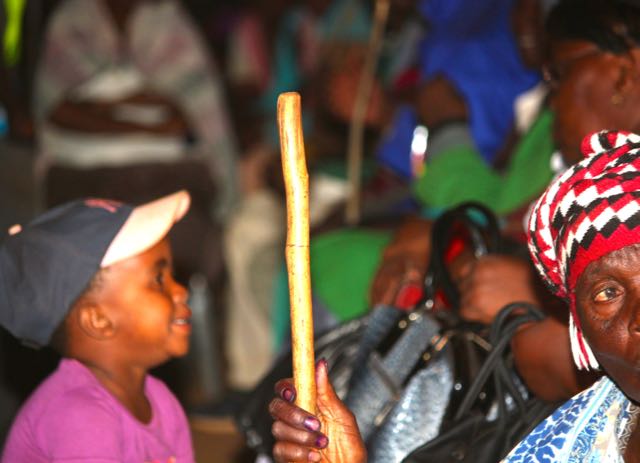 What exactly should The Luke Commission call what it does?

That’s always been a behind-the-scenes question. Not the mission or vision – those are clear and consistent. But the correct word or words to paint a mental picture of what happens in the byways of Eswatini when The Luke Commission comes to a community.

First, it was “rural clinics.” Then Eswatini’s health officials said, “You are much more than a clinic. You are a mobile hospital.”

It’s still a little difficult to define “outreach.” However, late in September this year, “reaching out” became clear in new, magnificent and marvelous measures.

Some 1,100 patients were served in one dawn-through-dark, remarkable day. More than 2,500 school children were fitted with new shoes. Twenty-five wheelchairs were assembled and given to disabled patients, who came in greater numbers than ever before. Meanwhile, a record 507 young people and adults were tested for HIV.

Liswati community leaders erected a large tent to shelter patients from sun and wind. Knowing TLC’s reputation to treat every last patient, leaders also brought in hundreds of chairs so those waiting for medical and spiritual help did not have to stand for hours or sit on the ground.

Amid buses coming with more patients, The Luke Commission team kicked into action. Instead of being overwhelmed or worrying about the “problems,” the team put extra bounce in their steps, in their voices, and in their care – determined not to let any sick or discouraged or confused patient slip through the cracks in the crowds.

It was a glorious day!

Never seen so many lined up for Room 1, looking forward to being interviewed individually about his or her medical concerns. Never seen so many disabled sitting quietly, waiting for medical personnel to triage them and to analyze what assistive devices could help them most.

Never seen so many needing vision care and lining up outside Room 9.

Some 314 patients received reading glasses, and another 41 received prescription eyeglasses. Cataracts were found in 10 patients and will be scheduled for removal in November. Also, the vision of 344 schoolkids was tested.

With an atmosphere of expectancy and satisfaction, TLC staff pushed beyond their own limits and plugged into God-given strength and endurance.

Asking Dr. Dennis, “What do you think about today?” His answer: “I had a lot of help. We doctored as a team. I am amazed at how big this outreach is. I started praying that despite my limitations, each patient would be heard and seen.”

Asking a young man who had just been circumcised in Room 6, “Were you treated kindly today?” His answer: “So great. I was given respect, and the nurses are pretty.” (A total of 52 volunteered for male circumcision this day.)

Asking a Liswati staff member, “What about this crowd?” His answer with a laugh and a handshake: “We came early this morning, and we will leave tomorrow morning. It’s okay.” (Everyone and all vehicles were back to the Miracle Campus by 1 am – a miracle in itself.)

About the ever-present fight against HIV, 322 adults tested, 121 for the first time ever. Nine people learned they were positive, while 5 knew they were positive but asked to be retested. Blood draws established CD4 counts for 17 patients.

Besides the 25 wheelchairs given, 7 pairs of crutches and 4 walkers were distributed.

The pharmacy began to run out of basic medications (something that almost never happens), but the Miracle Campus support staff sent out a truck full of medicines to restock the pharmacy.

Throughout the day, bus drivers and kombi drivers came back to the outreach site and announced through megaphones that they were ready to deliver patients back to their homestead areas.

It was a bit of a circus, yes, but a circus with purpose to help those who have little or no medical help throughout their precious lives.

Indeed, it was a glorious outreach. Reaching out…