Looking Over His 112 Years 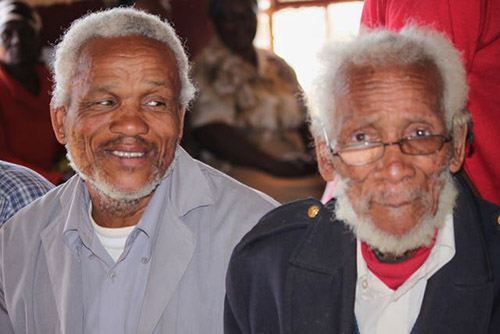 Before HIV/AIDS invaded the lives of Emaswati 20 years ago, Eswatini ranked one of the highest for life expectancy in Africa. Today it ranks one of the lowest.

But in the midst of startling statistics, there is a 112-year-old patient who literally has seen it all in his rural community.

Philip Dlamini came to a TLC hospital outreach on the arm of his son, age 67. He used a cane, but sat up straight while waiting to talk to Dr. Harry.

When prompted to look back over his century-plus in Eswatini, Philip said he recollects “the old king coming back from school in England.”

Was Philip schooled? “No, I know nothing about schools. There were no schools in Eswatini then.”

Philip did not marry until he was almost 40 years old. Why? “We did not grow so fast, because we did not eat eggs or cheese. It took us a long time to mature.”

In his youth, Philip took care of his father’s herd of more than 100 cows. “I was master of the flock,” he smiled slightly, displaying a lack of teeth.

When Eswatini sent soldiers to fight on World War II’s African front, “I ran away to the mountains, so I didn’t have to go to war,” he explained.

And Philip remembers the drought that started in 1942 and continued several years after the war ended. “We were hungry. Crops did not grow.”

He has not traveled more than a few kilometers from home all his long life. “I am a Liswati. I love my land.”

As Philip walked away from the pharmacy, he carried a bag of routine medicines that might have been given to a man half his age. The son needed more medications that his dad did, though both men had weathered the years well with dignity.

Offering dignity to the sickest and poorest and the eldest – that’s TLC’s mission.