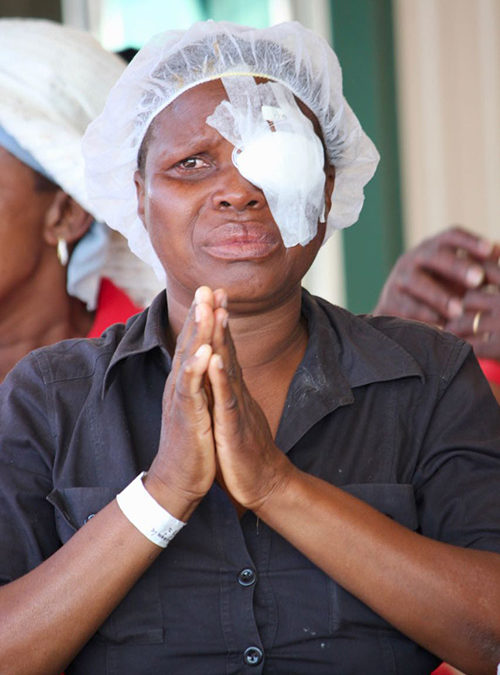 Fear of the unknown, fear of unfounded gossip, fear of a difficult life being made more difficult… That was Sonto Magagula’s view from behind a dim eye.

But brought to the light of an operation on the Miracle Campus recently, those fears dissipated in the noonday sun.

Declared Sonto Magagula: “I was afraid to go to surgery. Then I was afraid to have the patch removed. But The Luke Commission has treated me tenderly, so why should I fear?”

The May surgical session of CARES (Comprehensive and Restorative Eyecare Services) brought Sonto to the Miracle Campus. Unable to see out of one eye, she needed Pterygium surgery to remove a clear layer of tissue covering the front of her cornea.

She arrived on campus Sunday afternoon in time for a church service featuring Eswatini’s well-known preacher Zakes Nxumalo. Her vision problems were evaluated Monday and surgery scheduled for early Wednesday.

“People who came from surgery were making me afraid. They had patches on their eyes and said they could not see. They talked and talked,” she said. “I asked someone in a red jersey why they could not see and was told they would see when the patches were removed the next day.”

“The devil was grabbing me down, telling me to run away,” Sonto explained. “But I did not run.”

While waiting for her surgery turn, Sonto was crying. A TLC nurse asked a staff member to pray for Sonto. She calmed down. “It was not painful,” she admitted later. “The Luke Commission people treated me good and took care of me after the surgery.”

The next day while waiting to have her patch removed, Sonto cried again. “I was worried about my children. Would I really be able to see well again?”

She sat in the back row of 28 patients who had received single or double cataract and Pterygium surgeries the previous day. She waited patiently and sometimes not so patiently for her turn to uncover her eye.

The 44-year-old single mother has five children, ages 9 to 25. Sonto is a “hawker” and, therefore, lives in the city to sell her goods. Her children stay at the family homestead out in the country with her mother. “I want to live with my children, but I first must earn more money.”

She continued: “Please pray for me that I can care for my children again. I must be able to see money better so I am not cheated.”

Bathed in prayer and comforted by the singing and praising of other eye patients, Sonto waited and lifted her hands to heaven. Finally, her turn came to have her bandage removed…

At first her sight was blurry, as is usual with this type of operation. As the hours passed, however, her sight improved steadily. Her eye was reevaluated, and she received medications to take home.

Dancing out TLC’s gate, Sonto continued to celebrate: “I didn’t want to come. But I did. Now I can see!”

End of story. No, it’s just the beginning for Sonto.