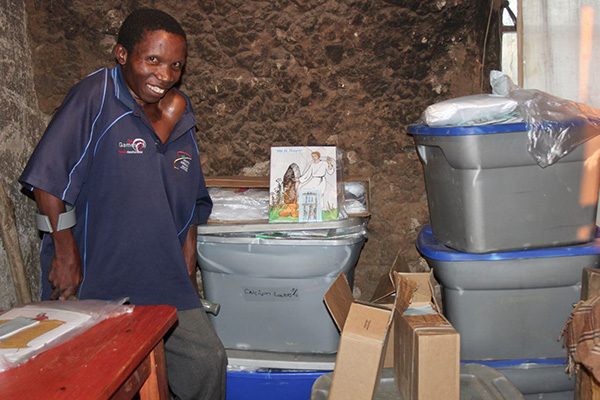 “Thank you for taking care of me with medications, a cart to move around, everything. Then you let me work! My job with TLC wakes me up in the morning and makes me smile in the day.”

These are the grateful words of disabled Sizwe Mkhabela.

This 35-year-old man was kicked by a cow when he was eight years old. His whole body went numb, he remembered. His family did not take him to a doctor, “because the lines were too long, and we had no money.”

Sizwe’s body recovered a little, enough that until he was 18 years old he could herd cattle.

Then in 1999, his body stiffened and he no longer could bend his legs or upper body. Today he is disabled to the point where only one arm and his hands will move.

His mind is sharp, however, and Sizwe is upbeat and gregarious.

TLC looks to employ disabled persons, if possible. So when Sizwe showed up at the gate, he was given a chance. For a month, he worked on campus packing bags with Scripture booklets for the pharmacy at outreaches.

During that time, a Mobility Worldwide cart was assembled for him. Since his leg will not bend, TLC’s welder and a mechanic had to devise an extended footrest for the cart – one with indentations, so Sizwe had adequate room to turn the front wheel.

Sizwe usually moves around slowly on crutches that he received at a Luke Commission outreach years ago. “This cart will help me move faster,” he smiled.

After working on the Miracle Campus for a month, TLC administrators determined it would be better for Sizwe to work at home.

Today that’s what he is doing. He stands up and leans against the wall of his hut to pack bags on a low table. In his room are a bed, the table, and five tubs of TLC material for him to assemble. “I must keep my work close to me,” he explained.

The first day he returned home, he completed one-half of his weekly assignment. He hopes TLC will bring him more material, but remains thankful for any employment opportunity.

“Thank you for my job. Jesus sent TLC to me to help me. I know that,” he said.

Sizwe has lived alone since his mother and father died in 2001. Neighborhood boys do visit him, but none of his four sisters or one brother does, he said.

His hut is part of a homestead owned by a lady he calls his “aunt,” who comes to see him on Saturdays. He receives some food from World Vision, but the rest of his living necessities come from “who thinks of me,” he shrugged.

Unlike his body, Sizwe’s faith is strong. “I believe in Jesus. He is with me. When I came to The Luke Commission I couldn’t speak English, but I am getting to understand.”