Life-Changing Intervention – One Family, One Week 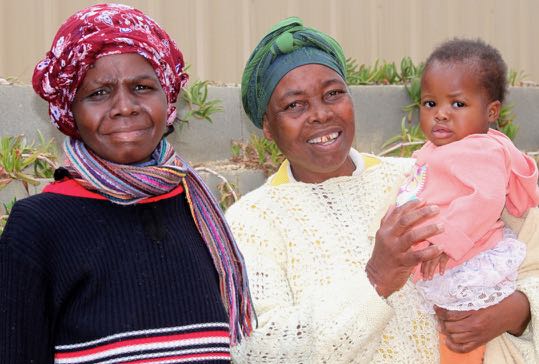 In one week, four members of the same family, one by one, were initiated into Anti-Retroviral Therapy for HIV/AIDS.

What started at a rural Luke Commission outreach moved into nick-of-time events at the Miracle Campus.

Seeking help for her eyes, Gogo (grandmother) Thulile came to an outreach. Room 9 staff talked to her about her “status” – a term in Eswatini, which indicates whether a person is positive (oft’-feared) or negative (desired) for the HIV blood virus.

“Knowing a patient’s status is necessary to evaluate how to diagnose and improve their sight,” said TLC nurse Tiffany.

TLC staff learned that Gogo Thulile previously had refused the Anti-Retroviral Treatment, because she didn’t “trust” the places or people that delivered the services. Also, she had been informed that she must eat good food, if she took the daily medications.

“I stay alone and all my children are unemployed. We have only a little food some days,” she explained.

Gogo Thulile first tested for HIV in 2005, but in her mind the results were not conclusive. In 2008 after testing at three different sites, she finally accepted the news no Liswati wants to hear: “You are HIV positive.”

Her husband died in September 2015, after a long, painful illness.

At that outreach, TLC staff discovered that Gogo Thulile’s CD4 count was low, dangerously low. If her life was to be spared, she needed to start treatment immediately.

Three Liswati staff members, individually explained the progression of the disease, pleaded with her to accept help, prayed with her, listened to her fears both real and imagined.

The conscientious community leader, called “bucopho,” also encouraged Thulile to go to Miracle Campus, which is an ART distribution center.

“I have no money for transport,” was her last objection. Therefore, TLC gave her travel funds. Her homestead is two and one-half hours from the Miracle Campus.

Two days later, the 59-year-old grandmother arrived at the Miracle Campus with a wheezing baby on her back. Her 2-year-old granddaughter had a high fever and labored breathing.

The baby, Nonhlanhla, had been positive for HIV since birth, admitted Gogo Thulile.

“She was so sick,” said Tiffany. “We treated her for pneumonia.”

Amid all the medical concerns were the social and spiritual snags.

The baby’s parents had to be located before the sick child could be given anti-retroviral medications.

Staff member Sipho prepared himself to physically search for the parents, “wherever that might lead me in Eswatini. I will push to find the whole family.”

The next morning, Sunday, the baby’s father unexpectedly arrived at the Miracle Campus. At this point TLC had not found this dad; he found us.

He had no permanent address, he said, but instead moved around the country looking for work. He had never tested for HIV but agreed it was time. Predictably, he tested positive for HIV. His blood was drawn and analyzed; CD4 count was gravely low, too. He needed instant ART intervention.

Baby Nonhlanhla’s father said her mother lived in a town not too far away. He offered TLC her contact information.

“Only a miracle could have gathered in these four people, one a baby, so they could be helped now, now,” said Sipho.

The baby’s mother Fikelephi, it soon became apparent, was extremely ill. In fact, she had lost her job in town because she was too weak to work. Thin, gaunt, shuffling, Fikelephi walked with a limp. Her feet seemed too heavy to lift from one step to the next.

(A trace of her former beauty shone through, when she was later coaxed to smile for a photo.)

Fikelephi learned she was HIV+ in 2001, 15 years earlier, but had lived in denial. She, too, believed the misconceptions and half-truths about ARTs. But she was willing to start treatment now.

The young mother has two other children, which she said have tested negative. Since Fikelephi’s health had deteriorated, Gogo Thulile took over care of her little granddaughter.

When suggested that Grandma was the “strong one,” she said, “Strong but not much.”

All four are now fighting the disease that still plagues this otherwise peaceful, gentle kingdom. Although the Miracle Campus is now an official ART center, TLC will not replace what is being done elsewhere in Eswatini, but will seek to rescue those who may fall through the cracks or distrust others, for whatever reason.

The whole family is willing to come to the Miracle Camps every month for follow-up medical visits and to have their daily ART medications analyzed and altered if necessary.

“We have been cared for, especially the baby,” said Gogo Thulile. “She is already much better and smiling again.”

by Janet Tuinstra for TLC

More to this story: Thulile was called back to the Miracle Campus three weeks later to participate in the 4th surgical session of Comprehensive and Restorative Eyecare Services. With her baby granddaughter still on her back but in much better health, Thulile arrived on campus to get help for her eyesight.

After three days and successful eye surgery, she left declaring: “I will never forget…” As is often the case, a patient came to a TLC outreach for one health issue and received intense care on other medical problems, too. Full service. Full circle. Full joy.

Even more: Nine months later, three of these four patients have improved greatly and are still coming to the Miracle Campus every month for their anti-retroviral medications. The baby’s mother has chosen to go to another ART facility, and baby Nonhlanhla is now living with her mother.

TLC received permission to tell their stories, so that others could be encouraged in their fights against HIV