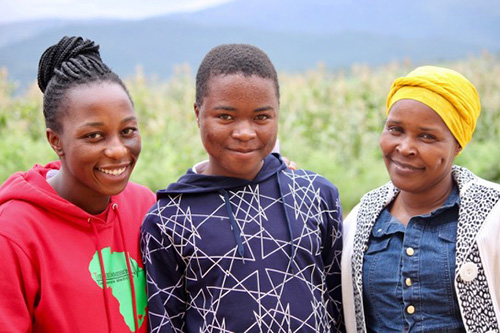 Two boys, two unusual diagnoses, and two lives have joined together for a journey into wellness…

That mutual suffering makes them unable to walk, sometimes unable to talk, unable to function in almost any normal way.

Sibongelo’s mother brought him to the Miracle Campus 10 months ago. “He looked like he was one-day old,” said senior medical clinician Lelo Dlamini. “He had no expression. His eyes did not seem to see.”

Lelo was particularly touched by Sibongelo’s case, although she treats hundreds of cases with the medical team at The Luke Commission. “Looking at him today brings me to tears. It’s the first time I have seen him smile.”

Initially, blood tests indicated that Sibongelo was deficient in vitamin B12 – severely deficient. To treat the deficiency aggressively, Sibongelo and his mother moved to the campus for a month, while he was treated daily with injections of the precious vitamin. He went from bedridden to walking slowly, talking slightly.

On Sundays, Sibongelo and his mother Tundy Maphosa went to church with The Luke Commission staff at Potter’s Wheel Church.

“He loves that church,” said Tundy of her son. “Jesus became real to him there. He says Jesus has become his Savior.” Now that he is well, Sibongelo has asked permission to stay overnight at the Miracle Campus on Saturdays in order to go to church Sunday morning with the team and patients. Granted, of course…

As Sibongelo’s strength increased, he came to the campus once a week for injections. He did not mind waiting his turn with other patients, because he enjoyed listening to the praise songs, even if they are in English. Said his mom, “I cannot speak English, but he is learning English from those songs and at church.”

Meanwhile, another young boy arrived recently at the gate with his mother. He was weak, so weak. His mother was perplexed and worried. Blood tests showed that Mlando Ndzima was also dangerously deficient in vitamin B12.

“We are not sure what causes this,” said Dr. Harry VanderWal, “and it’s not often we see duplicate cases. We have learned to expect the unexpected at the Miracle Campus, though, so we welcome our new young patient.”

After 10 days, Mlando still cannot sit up by himself and does not feel well. But he smiles; and although he’s shy, he graciously accepts TLC staff’s ministrations.

Sibongelo and his mom Tundy went to Mlando’s bedside to encourage him. She gently held Mlando’s hand, knowing that his hand hurt to be touched, just as her son’s hands had been painful.

Tundy was disappointed that his mother was not there. “I wanted to meet her and tell her what we had gone through and how my boy was well now,” said Tundy.

Mlando’s mother had returned home to gather her 4-year-old son and bring him back to the Miracle Campus with her. Another child, age 12, will take care of herself on the homestead.

Sibongelo said to his new young friend: “Pray every day that you’ll be able to go back to school.” Sibongelo looks forward to going back to school the end of January, when the school year begins. He will be in grade 7, the last year of primary school in Eswatini.

These days Sibongelo comes to the campus only once a month for injections. Playing soccer with his friends gives him great joy.

“But my heart is always here,” he said, sweeping his arms about the patient ward and the whole Miracle Campus. “This is home to me.”

Meanwhile, Mlando is too sick to say much. Right now. But just wait. The link between the two boys has begun, and hopefully healing has, too.

PS  Mlando’s mother Mcengiwe arrived on campus the next morning. She said her son had been sick for three months. A widow whose husband died in 2010, Mcengiwe supports her family being a “market woman,” selling fruits and vegetables. That support will be temporarily suspended as she stays with her son and helps care for him on the Miracle Campus. However, meals and necessities will be provided by TLC.

“There’s no bigger word than ‘thank you.’ I have a happy heart today because of The Luke Commission,” she said. Mcengiwe urged Mlando to use his crutches to move, even though his feet, knees, and back ache.

Permission was given to tell this story.