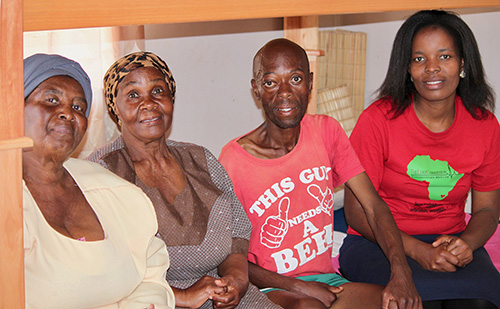 That’s what The Luke Commission’s patient Eric Maphosa did before he died a few weeks ago. Granting us permission to tell his story, he hoped to encourage others to look to Jesus “the author and finisher” of his faith and to experience the peace of forgiving and being forgiven.

Prepare to be blessed, challenged, reassured.

Eric first met The Luke Commission when the team came to his rural community “far away” in August, 2017. He had resisted testing for HIV and TB, but the day came when he thought he had the flu, was dizzy, and felt lumps on his body.

Until recently, he had worked as a security guard on the other side of Eswatini. Two months earlier, he had a stroke-like incident when one side of his body stopped working. His mother said, “I discovered him one-sided.”

TLC medical team operated on a lump on his back and sent a biopsy away for further analysis. Eric tested positive for HIV and tuberculosis. When the other tests came back, they showed he had cancer throughout his body.  Eric was initiated into Antiretroviral Therapy in September on the Miracle Campus, where he stayed until he was a little more stable.

Then confusion set in. Doubt. Fear of dying. All understandable.

Eric, only 35 years old, asked The Luke Commission to send him to South Africa, as part of a Liswati government program to treat difficult medical cases – especially cancer. While Eric waited for the scheduled appointment in South Africa, he sought the advice of a traditional healer who said he was healed and did not need to go to South Africa.

Eric went home, but the sickness continued. He missed the South Africa appointment. “I could tell the cancer was eating me. It was not waiting. My stomach hurt,” he told TLC later.

Back at the Miracle Campus seeking help once again, Eric was counseled that he should tell his mother and sister about his HIV and TB status. Eric would need their support in these difficult days, he was told, and he must realize just how sick he was.

Accepting his serious condition angered Eric. He shouted at a TLC staff member who cared for him and said he wanted to return to the traditional healer. “I didn’t have a problem with him yelling at me, but I asked him to just give me an ear, so I could explain and answer all the questions in his mind,” said the staff member.

TLC staff met with Eric and his family. His mother and sister, who live closer to the Miracle Campus than the parental homestead, thanked The Luke Commission for their generosity to Eric, and asked the staff to ignore his outbursts.

During one of those tumultuous times, a TLC staff member led Eric to a saving faith in Jesus Christ.

Gugu explained that since our bodies belong to God and not ourselves, it is not wise to choose traditional healers. She said, “It is good to trust God in any situation, so even if He calls us away from this life, we will have eternal life with Him.”

Eric listened and heard and accepted. It was a new beginning for Eric. Everyone saw the difference. His actions reflected the change. His cross countenance turned to a serene smile.

Eric wrote a letter to The Luke Commission, asking the team to contact three people from whom he needed to ask forgiveness “before my heart stops.”

TLC contacted the two men and one woman, all who were surprised that Eric was ill. They came to the Miracle Campus one by one.
As he waited for the guests to respond to his requests, Eric said: “I must let them know it’s over. We must talk together like we used to.”

The first man had been a good friend of Eric’s, until they fought physically over a soccer match. Eric also borrowed money that he did not repay. They no longer even spoke to each other. Eric apologized and asked forgiveness. His friend was touched by Eric’s humility and desire to mend their relationship.

The second man was “my best friend at work. Because of money I took but did not repay, we separated. I must ask his forgiveness, since I don’t know how many days I have left on this earth,” Eric said.

The friend sat quietly for a few minutes, with tears running down his cheeks. “You do not have to pay that money back anymore,” he said. “I forgive you.” Then both men cried.

A lady whom Eric used to work for at special celebrations came last.

Eric had argued with the woman over a gift he had received but she had kept because of previous debts. “I need to talk to her and ask forgiveness.”

As Eric thanked her for “respecting and coming to me,” the lady was visibly shaken by Eric’s appearance. She wholeheartedly granted forgiveness.

Eric talked often with his little daughter Setsabile. At first, his mother said the girl could not leave school. However, TLC team members urged her to bring the girl to her father, while he could still talk and tell her he loved her.

“My cell phone no longer works,” said Eric’s mother Thembe, after she agreed to bring her 7-year-old granddaughter to see Eric.

“I will find you a charger,” answered TLC staff member,

“TLC even charges phones for patients?” asked another patient who overheard the exchange.

“This is the great commission,” replied the staff member, laughing. “There’s no hospital like it.” (Humor amid suffering.)

In the days that followed, Eric’s strength continued to wane. TLC’s team kept him medically comfortable and spiritually refreshed. He went to his mother’s homestead nearby but then came back to the Miracle Campus for a few days. He said he wanted to die at his mother’s home, even though he appreciated the care he received at the Miracle Campus. Back and forth his family brought him.

One morning in late October, TLC received a phone call from his mother, saying Eric had passed away.

“He was at peace. He told us he was ready to see Jesus,” she said shakily, having just lost her only son. Eric had arranged for his daughter to live with her grandmother. His house was in order.

At the all-night vigil that Saturday, every relative, every friend, every pastor who spoke – as is the tradition – mentioned The Luke Commission and how the team there had comforted and rescued Eric (family also called him Mbongeni) in his last days.

Pastor Thobile Mnisi, a cousin of Eric’s who often teaches staff at The Luke Commission, was surprised when TLC’s name surfaced so frequently. “I did not know Eric was a TLC patient, until I attended his funeral. It’s amazing how far TLC’s hands reach out in Eswatini.”

Explained Pastor Thobile: “His uncle welcomed everyone and spoke about the special treatment Eric has received from The Luke Commission and how Eric (Mbongeni) accepted Jesus when a TLC staff member led him to the Lord.”

His mother Thembe told those who attended Eric’s funeral that “The Luke Commission helped my son get a passport to go to South Africa. He never had a passport and passed before he could use it. But I will keep the passport forever as a memory of him.”

Thembe also told those honoring her son: “They took us to their home church and made us part of their family.”

Another relative said, “He died surrounded by love. We thank The Luke Commission for that.”

Eric was buried at sunrise Sunday morning. Buried but alive in Him.

PS  Since Eric passed, other extremely ill patients with cancer although HIV negative have come to the Miracle Campus gate. All have been admitted, given tests and diagnoses, and treated with tender, loving, compassion in their last days. Every day they were encouraged from God’s Word and prayed with by TLC staff counselors. Most, indeed all, have accepted Christ as their Savior. Maybe that’s exactly why they arrive at the gate – so they can learn that Jesus loves them. The Great Physician heals in a variety of ways for His glory.