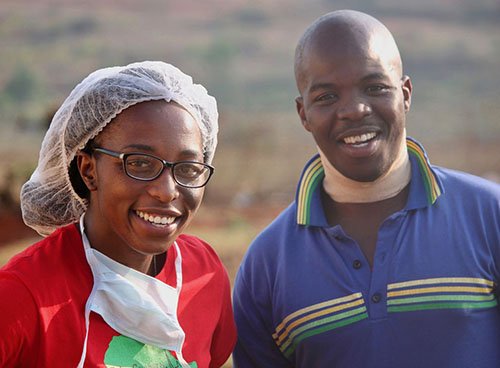 The word is out!

The Luke Commission will help people with lumps, growths on their bodies. But maybe not until dreadlocks are shaved, so the patient can know to seek help.

Sifiso’s story will make you smile. It has a few humorous twists.

Seven years ago at the age of 26, Sifiso started looking for a job. He had not been able to find one ever, so he thought he would take a different approach and shave off his dreadlocks.

Most Emaswati have short hair that does not grow long. Sifiso was proud of his long, tangled locks.

Under that hair, however, he discovered a lump on his neck. “I didn’t know I had it before I shaved. I wondered why my neck felt stiff sometimes.”

Sifiso did get a job, although the lump continued to grow. Then he met a man who knew a man who had a telephone number… Yes, the Eswatini grapevine in action.

“A man in Manzini told me he had a lump that The Luke Commission took out for him. He gave me a number to call. I did,” he said.

The 24-hour medical telephone for The Luke Commission is published all over the country on the pharmacy bags given patients at rural outreaches, as well as on other TLC printed material. TLC has developed an elaborate system for keeping track of patients and potential patients.

“They took my number and said they would have someone call to talk to me. I was surprised when they did call me. I explained my problem and The Luke Commission asked me to come to the next outreach at a school far away,” Sifiso continued.

“I didn’t care how far it was. I came today, not sure what would happen, if anything,” smiled Sifiso, as he touched the bandage on his neck. “I thought they would just check me, but see it’s gone.”

After closely observing exactly where the lipoma was located, and if it could be removed without damaging nearby muscles or organs, TLC’s medical team operated in the mobile surgical unit set up for that day.

“It’s amazing what you do. I’m short of words to express how grateful I am to The Luke Commission. You are doing an amazing job. I have felt this every day for seven years and worried. No more,” said Sifiso.

Now at 33 tears, Sifiso is not married “yet. I have a woman I want to marry.” First, he must save enough money for the “bride price.” He has a 10-year-old son from another woman.

Sifiso works for large hotel complex in Eswatini, setting up the grounds for various events. He likes his job.

“Now I will be able to turn my head easier to see what needs to be done. And I will smile more, just remembering that lump is gone.”

Sifiso said he will keep TLC’s telephone number to give “to anyone who has problems with their bodies. I know you will listen and help.”