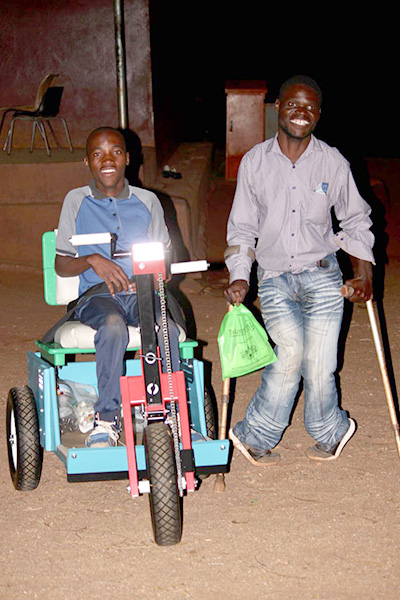 It’s not unusual for two patients at a single Luke Commission outreach each to receive a Mobility Worldwide cart.

But it is uncommon for two disabled neighbors each to be fitted for a cart the same day, in this case the same evening.

Seventeen-year-old Siyabonga Mchokozi was born with weakness from his waist to his feet. Why, he knows not. Though the young man has never walked, his arms and upper body are “healthy,” he explained with satisfaction.

A neighbor, 28-year-old Vusi Magagula gets around slowly on crutches, but is limited as to where and how far he can traverse the rugged Eswatini countryside. However, when The Luke Commission came to his community, all this changed.

In 2014, Siyabonga received a child’s PET cart at a TLC mobile outreach. “I liked my old car,” he said, “but I am too excited about my new car.”

Yes, to Siyabonga it’s a car, not a cart. With his smaller “car,” which he has outgrown and out-worn, Siyabonga fetched firewood and water to earn money to buy food. “Now I will be able to carry more and go farther with more speed,” he declared eagerly.

Siyabonga lives with his brother, who at age 25 is Siyabonga’s primary caregiver and companion.

Vusi dwells nearby and has watched Siyabonga move around in his little cart, wondering if there could be one big enough for him. He said he asked Jesus to take him to the people “who know about these carts.”

Arriving later than most of several hundred patients, Vusi was not overlooked or discounted. “I tried to come early this morning, but…” and his voice trailed off. Movement is simply difficult when you are disabled; TLC understands this.

Vusi was registered, triaged, saw the doctor, and received medications. He also was measured for a cart using Siyabonga’s assembled cart.

Several other mobility carts had been fitted and given away that day, so none were left on the TLC “supply” trucks. A cart would be built to Vusi’s physical specifications on the Miracle Campus and delivered to him when the medical team returned to check surgery patients.

“They told me they would bring me a cart in two days,” he smiled. “I have waited years to be able to move freely and fast. I can wait a little longer.”

Vusi is not married and has no children, although he would like both. He lives with his mother and brothers and sisters. He completed grade 3 and is always looking for the next job.

As nighttime and coolness moved into TLC’s outreach site and most patients disappeared into the darkness on treks to homesteads, Siyabonga and Vusi paused to celebrate their newfound independence, not wanting this day to end.

by Janet Tuinstra for the team who starts early, stays late, and celebrates with those who celebrate