He’s Only One Father in Many, But… 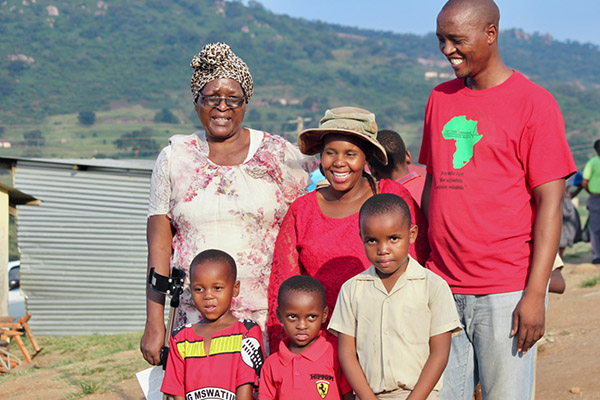 Some are married to the mothers of their children. Some are not, often because saving for the bride price, 14 to 16 cows, may take years.

Some fathers never had paying jobs before The Luke Commission. Some had temporary jobs that end suddenly.

Some TLC men want to be husbands and fathers. They are waiting for the right lady to come into their lives. When asked, “Are you married?” the men respond “Not yet.” Never do the young Liswati men say, “I do not want to marry” or “I like being single.”

Hence, on this Father’s Day, we’d like you meet Sithembiso Gama, a new staff driver at The Luke Commission.

He is the father of four sons. We met three of his boys and his wife of nine years, when The Luke Commission outreach team traveled 2+ hours from the Miracle Campus to Sithembiso’s home area, miles off the tar roads.

In fact, that day Sithembiso was one of the drivers of the Sprinter buses that take all the staff to the mobile hospital outreaches. Driving the last long stretch down the dirty road, Sithembiso shared shyly but smiling: “This is my home.”

“Will we meet your family today?”

“Yes, I have asked my wife and boys and mother to come. They know The Luke Commission from the many years you have been coming to our community.”

Later in the day, we did, indeed, meet Jabulile and three of the couple’s sons. The oldest boy, age 11, goes to school in another area of Eswatini and lives with her brother-in-law. “He only comes home on weekends,” said Jabulile.

(Liswati schoolchildren can go to school wherever their family wants to enroll and pay the fees. Most attend rural schools close to their family homestead, while others travel to all corners of Eswatini for education.)

Jabulile resides with Sithembiso’s mother at his family homestead. Two cousins in their teens also live with the two women. It’s normal for Liswati women to care for more children then just their own.

“Do you mind that your husband works so far away from home?”

“I am so glad he is working,” replied Jabulile. “It has been a long time,” her voice trailed off…

She explained that Sithembiso had worked as a driver early in 2017. “Then his contract ran out and was not renewed,” she remembered. “That’s what companies usually do – hire at the first of the year and not in the middle.”

Jabulile continued: “I am so happy that The Luke Commission hired him and did not tell him it was only for a short time.”

“What can you tell us about your husband?”

“He is a man who loves his family. He’s a hard worker,” she answered easily. “Even when he does not have a job, he tries to get food for his family to eat.”

And is not this the essence of Father’s Day? Recognizing and thanking men who love their families and willingly sacrifice for them?