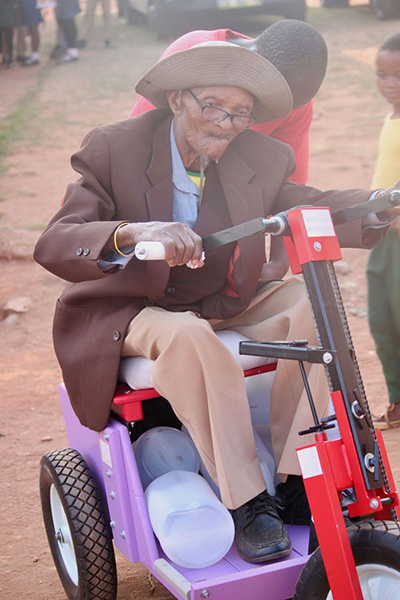 Daniel Magongo looked frail, barely able to hold himself up with two canes, moving ever so slowly.

Surprisingly, looks were deceiving the day The Luke Commission met Daniel. At 89 years, he no longer talked much, explained his wife and son. “Still his arms are strong, and he would like to ‘pedal’ that cart.”

Daniel had been eyeing the Mobility Worldwide carts throughout the rural hospital outreach. He waited quietly in the triage room and then the doctor’s room. But he kept glancing outside at a young man who was whirling around the schoolyard in a mobility cart getting accustomed to his new “wheels” and new independence.

“I never saw a cart like this before,” whispered Daniel to a TLC staff member. “I just came hoping to get some help.”

Later, TLC medical personnel assessed Daniel’s ability to “drive” the cart using his arms and hands. They were much stronger than his legs, as were his back and shoulders.

TLC staff member Mduduzi began to assemble the mobility cart. A crowd of neighbors and family surrounded the emerging cart.

Mduduzi explained how to care for the cart; how it was a gift from people in the United States; and how when Daniel died or no longer needed the cart, the family was to give it to the chief in their area, who would find the next person who needed it most.

When he was lifted on his new cart, Daniel raised his arms in victory and signaled that he wanted to get moving. “He’s happy,” his son said.

Daniel’s wife spoke his thanks: “Thank you to those people who made these carts and sent them to us. May God prosper them, and may they live long lives.”

Daniel’s son said he had four brothers and four sisters, all living and all with children. “My father and mother have too many grandchildren,” he laughed, “more than 100.”

And off he pedaled using his arms, hands, and simple determination.

Grateful for his example, Janet Tuinstra