Lamula’s Wheelchair Makes Him Feel Like a Strong Man 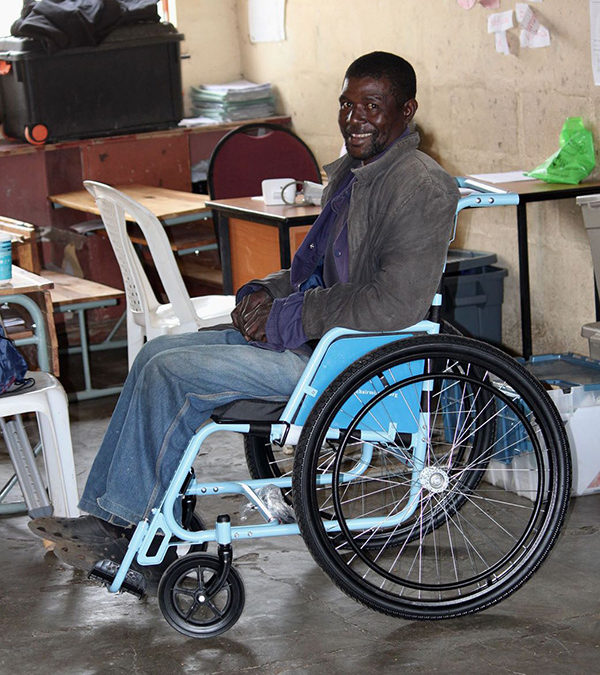 Sometimes a wheelchair becomes more than a means of transportation. More than a chair for sitting and resting. More than seeing the world from an upright position.

It adds dignity and hope to an otherwise painful accident that saps a man’s livelihood and usefulness.

That’s what a Free Wheelchair Mission chair did for Lamula Shongwe. He tells you with his smile and his handshake that conveys strength and gratitude.

When The Luke Commission mobile hospital came to Lamula’s rural community in Eswatini, he had determined beforehand: “I will be there.”

It was the fourth year he had made a point to attend the annual TLC outreach in his area. “I have been helped by the doctor and been given medicines. I have tested for HIV and been treated well by all the TLC people in red.”

He continued: “This year, though, I knew I needed a wheelchair. It was just becoming too difficult for me to move.”

Last year, Lamula asked for crutches – which he received free from TLC.

He’s only 45 years old. When he was 32 years old, he worked at a gold mine in South Africa, “the longest mine near Johannesburg, down, down, far.”

A beam collapsed on Lamula, and sharp stones cut his legs right below his knees. “I have no feeling in them now,” he explained.

Lamula’s does not receive any mining compensation. He does receive E240 (about $20) disability every three months from the Eswatini government. He talked about this without bitterness or self-pity.

He is married with two children, a 13-year-old boy who lives at the only school for the deaf and mute in Eswatini, and a 2-year-old boy.

“I am thankful for all the times The Luke Commission has come to our community. And this year I am thankful to the people who made this chair and sent it all the way to my country,” said Lamula. “Wheelchairs cost a lot of money, thousands of emalangeni. This chair gives me hope.”

The Luke Commission thanks Free Wheelchair Mission for partnering with us throughout Eswatini.

by Janet Tuinstra for TLC