Filling Gaps and Finding a Whole Family Who Needs Help 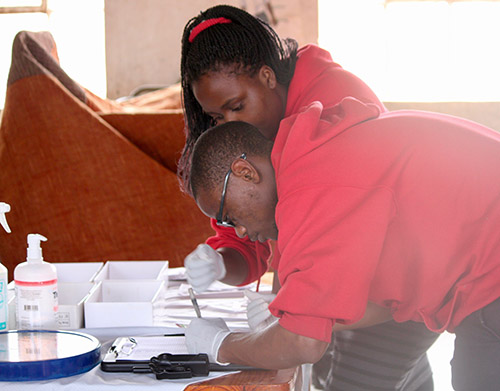 Keeping track of HIV patients has taken on a fresh comprehensive approach by The Luke Commission staff to fill gaps of patient denial, acceptance of their status, and patient ART adherence.

TLC counselors are combing Eswatini’s highways and byways every weekday, not only personally escorting patients to Anti-Retroviral Treatment centers of their choice, but reaching into the homesteads where patients may be hiding from reality and defaulting on their treatment programs.

TLC calls their new service “referral visits” with an emphasis on the plural of “visit” – as many as it takes to confirm that patients have been linked to an ART clinic.

As an example, take this case of one young family member that uncovered many family members who need to be on ART.

The Luke Commission met 13-year-old Sipheshile at a TLC outreach, when she tested and was found to be HIV positive. Because of her low CD4 count and high viral load, TLC initiated her treatment.

Her aunt, a teacher at that school, said Sipheshile lived with her, that her mother only saw her daughter on holidays, and that Auntie would be her treatment supporter. With a referral packet from TLC in hand, Sipheshile’s aunt said she would take her to the nearest clinic and then inform TLC.  All the while, follow up calls to the mother were made to no avail.

When TLC did not hear from the aunt, they called her a few days later. On the phone, the teacher changed her story – saying she had not given Siphesihle the medications, because she wanted to first disclose her status to the girl’s mother. Then the mother would take the girl to the nearest clinic.

Determined to fill the gap that the girl’s health required, TLC relentlessly pursued and finally located the mother. She hesitantly admitted that she was positive and so was her husband but neither had followed through on treatment.

The Luke Commission counselor made a third trip to the rural school and the family homestead some distance away specifically to convince all of them the necessity of being on ART and adhering to the treatment, not running away or just throwing the medications away.

With help from TLC’s medical team, the counselor was able to convince the father, mother, and daughter to go back on treatment.

Then Siphesihle spoke up and said she did not want to take treatment, because her grandfather and grandmother were on ART, and they would find her every day and make sure she took the medications. Her aunt, she said, could hold her status against her.

The family then decided that they wanted to all go to The Luke Commission campus in Sidvokodvo and get their medications there. The grandfather and grandmother wanted to transfer, the mother and father re-initiate, and young Siphesihle faced her diagnosis for the first time.

The counselor agreed, and a TLC driver brought them to the Sidvokodvo campus.

All who work with HIV patients know this is not the end of the story, only the beginning really. But it is a beginning or continuation for a whole family’s health and well-being.