Sickness to Wellness, Bedridden to Walking 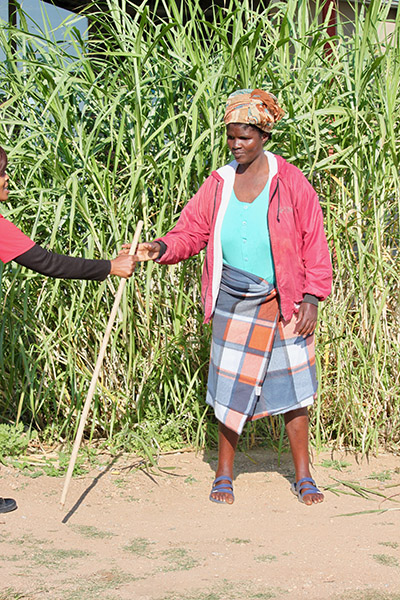 It’s tragic to be 32-year-old, all alone, and near death’s door.

It’s a miracle five months later to get out of bed and to walk into the sunshine again.

“God has made her a walking miracle. We all have seen it,” said Gugu who, with other staff members, has encouraged and prayed with Sithembile daily.

Her story begins earlier, however.

Sithembile first came to the Miracle Campus in 2017. She lived in staff housing while the medical team monitored her Anti-Retroviral Treatment. She had not done well taking the medications by herself at her homestead. “I accepted Jesus as my Savior while I was a staff housing. The Bible that The Luke Commission gave me became my good friend.”

After her health improved on the second line of ART medications, she returned home. She was worried about her four children, ages 5 to 12; her husband worked in South Africa.

“I did not have enough food, and I did not want to take my meds on an empty stomach,” she remembered. “They over-heated my mind, so I stopped taking them.”

Sithembile continued: “My husband was not supportive. He was gone for long periods of time, only home one weekend a month.”

On one weekend home, Sithembile’s husband called the hotline number on his wife’s TLC medicine bag, saying his wife’s mind was not stable and she could not walk or talk straight.

“He tried to make me go to the clinic, but I told him ‘take me to The Luke Commission.’ I will go nowhere else,” she said.

Thus began her five-month stay at TOB, the first building on The Luke Commission campus, which has been turned into a temporary hospital. A new Specialized Care and Surgical Centre (SCSC) with rooms for patients is under construction, but some patients need continuing care now.

Sithembile looked older than her 32 years, needed to wear diapers, did not talk logically most of the time, and was bedridden. Her youngest child, a 5-year-old son, accompanied her to the Miracle Campus and has lived with her there.

She asked her parents to take the other three children. “This is better for them. They have guardians,” she said, her smile a little wistful. “I do miss them, though.”

Four months into her latest stay at the Miracle Campus, Sithembile found she could pull herself up from her bed and move around with a walker.

Soon she was using crutches. Then she graduated to a walking stick, and finally Sithembile was able to walk by herself. Slowly. Methodically. But walk she did!

Today, Sithembile explained, “I have no problem talking about HIV. It’s my life. I will not hide from it anymore.”

Sometimes her feet swell, she noted, “but that is my only problem.”

Sithembile smiles continually now. “The Luke Commission people give us food, always talks about God, and pray for us. Please continue to pray for me. I thought my life was over. I have hope now.”

by Janet Tuinstra
encouraged by her courage