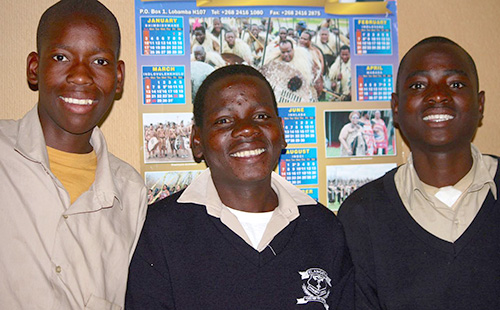 Three young men – still in primary school but determined to pursue more education – were circumcised at a Luke Commission outreach.

Forty-nine others were circumcised that day, too, but these boys stood out with their smiles and attitudes.

Thandokuhle Mdziniso, 17 years old, arrived at TLC’s mobile hospital outreach in his rural community with the desire and intention of being circumcised. “This can help me from getting diseases,” he said. “Most of my friends were circumcised here last year when The Luke Commission came.”

Thandokuhle said that he was not afraid, that the nurses were kind and treated him with respect. “I am happy,” he declared.

His younger brother is not circumcised. “I will talk to him now,” the older brother said. Thandokuhle is in 5th grade but did not seemed fazed about being a teenage student in a primary grade.

“I want to go to high school,” he said. He lives with both parents.

Melusi Mkoko, 20 years old, did not know he was going to be circumcised this particular day, but a TLC staff member “told me I would be helping myself. I think he was right.”

TLC staff phoned Melusi’s mother, who talked to a TLC counselor, and “she gave me the green light.”

Talking about the procedure, Melusi said: “Last year many of my friends came here to circumcise, but I was left behind. Last night I knew I must do this today.”

Melusi is still in last year of primary school, grade 7, but also wants to attend high school. He has one sister; the two young people live with their mother. His dad died in 2008.

“I don’t have brothers, but I have friends who have circumcised. I have talked to them. They told me how it would be here,” said Mfana. “I was not afraid.”

Mfana was in a “terrible car accident last year. It made me think I better get serious about becoming a man. I broke my leg, but it could have been much worse.”

A 6th grader, Mfana has had gaps in his educational pursuits but hopes to go to high school after grade 7. He lives with both his parents.

Becoming a man is not easy, these boys said. But the choices they made this day will help them be stronger, more determined, prepared for the future God has for each one.

Permission was given by all to publish these stories and photos.