Blind Welder Sees with His Heart 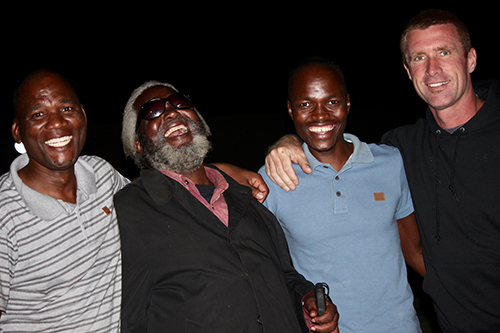 His blindness could not be reversed, nor could his delight be contained at the Miracle Campus.

BLINDNESS and deLIGHT do not go together, at least not until you meet Simon Masango.

He gave a gift to patients and staff alike at a recent eye surgical session. His disappointment was tempered with vocal gratitude.

When told that his vision, or lack of it, could not be helped, Simon Masango replied:

“I am fine. I liked coming to your home. I liked the church service. I liked meeting everyone. I liked having good food and being one of your many guests.”

Distinguished with long grey hair, Simon acted like a sighted person, “looking” new acquaintances in their eyes and shaking hands with a jovial welcome.

Simon was a welder his entire adult life. Now at 67, he can no longer work because he cannot see. “I’ve had much sadness in my life,” he said softly but still smiling.

In 2009, his eyes were injured while working as a welder in South Africa. His employer did not take him for medical care, so Simon sought help for himself. “I was fired for going to the hospital without the company’s permission. I could not go back to the hospital when they told me to return because of financial problems.”

Simon had more than one injury to his eyes while welding. “Once, one eye was hit by a stone while I was grinding. That was a bad injury.”

His wife of 30 years left him after his last accident. “She stayed for a while, but…”

The couple had 12 children. His wife took 6 of the children when she moved to South Africa.

The others? Years ago Simon came home from working in South Africa and 3 of his children were “terribly sick.” They passed away. “I was not home when they first got sick,” he remembered quietly.

Another died in 2002, another a few years later, and still another died just last year. “Now I am alone.”

A few seconds after making this statement, Simon recovered his joyful countenance and said, “I am still happy, because I believe in Jesus.”

Simon met The Luke Commission when the team came to his rural community in January 2018. His name and contact information were taken down so he could be brought to the Miracle Campus in May, when vision surgeons came to perform cataract and other surgeries. “They told me maybe the eye doctors could help.”

After his eyes were examined carefully, Simon was informed that nothing could alter his blindness.

He paused, smiled pensively, and declared: “I hoped God would touch my eyes, and I could see again. But if it does not happen, I can still see you all with my heart.”

(by Janet Tuinstra, who met Simon and thought he could see just fine. Maybe he could…)