Njabuliso Lives Above, and Beyond, His Limitations 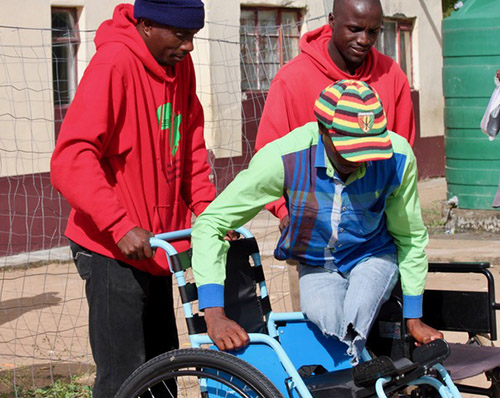 He is strong but unassuming. He smiles though seems shy. He has every reason to want revenge. Instead he has chosen to forgive.

This is a 28-year-old man The Luke Commission met with no lower limbs.

At a recent TLC outreach, he asked for a wheelchair. Understandably. He had a second-hand chair that “keeps folding up when I try to sit down.”

Often the disabled are born with special challenges. Not so with Njabuliso. He was attacked by four men while walking home at dusk a year ago. The men beat Njabuliso until he was unconscious and then laid him on nearby railroad tracks.

The conductor of the next train did not see Njabuliso until he ran over the already-injured man. Slamming on the brakes, the conductor stopped, notified the injured man’s family, and had him rushed to the hospital. It was too late to save Njabuliso’s lower legs or knees

Did Njabuliso know the men who jumped him? “Yes.”

Has he seen these people since? “Yes.”

Do you know why they attacked you? “No.”

Did you fight with them before? “No.”

Do you believe in Jesus? “Yes.”

Have you been able to forgive them? “Yes. I’m glad I’m still alive. I could have died.”

What a testimony to defeat bitterness and extend forgiveness! “They never have apologized to me,” he said quietly. His voice hung in mid air, as if to still wonder why…

Njabuliso is cared for by his sister who has a baby. The three of them depend on Njabuliso’s older brother for food and life’s necessities. He is strong in his upper body and would like a job, as he would like to marry and have children.

But for now, he sits at the family homestead, not working. “Thank you for your help,” he said.

And thank you to all who faithfully support The Luke Commission with prayers and finances. Without you, we might miss knowing men of such quiet, admirable character.

by Janet Tuinstra for the whole TLC team