From Cloudy to Sunny His Vision Improved 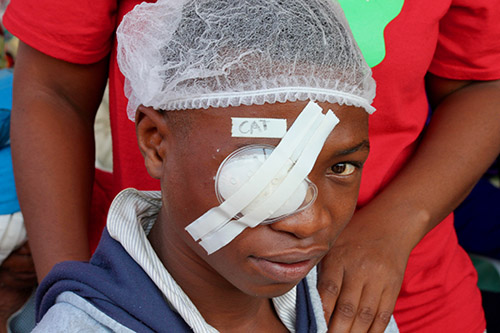 A 17-year-old student who wants to be a policeman realized his sight was poor but acted like he could see. When the “cloud in my eye” grew denser and denser, he could no longer overlook the obvious.

At a Luke Commission outreach in 2015, Bonginkosi Mamba was advised to come to CARES (Comprehensive and Restorative Eyecare Services) week for further vision treatment. He had a cataract in one of his eyes, which is unusual in a person so young.

“I had a financial crisis and could not come,” Bonginkosi said in 2018. Translated this means his family did not have the money to send him to The Luke Commission campus far from his rural area. Back then, he must not have comprehended that TLC would pay his transport and care for him while at the Miracle Campus. Now he knows!

“My eye had been bad for a long time,” he admitted. “But since the other eye could see, I just kept going to school.”

Bonginkosi hopes to attend high school next year. He lives with his mom, grandpa and grandma, a sister, and two brothers.

The cataract surgery was a thorough success. Usually, youthful cataracts are caused by infection, trauma, or congenital from birth. The procedure which restored Bonginkosi’s vision required a smaller incision than needed on older patients.

In the end, Bonginkosi was brave and determined. He traveled to The Luke Commission by himself and patiently waited through the various medical steps until his turn arrived.

Leaving for home on The Luke Commission bus three days later, Bonginkosi was a new young man with a sunny smile and an unclouded future.