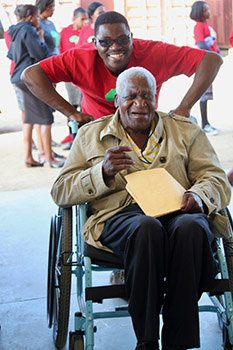 It’s the small things that thrill your heart when you go from blindness to eyesight, from the blackness to brightness.

That’s what Eliot discovered after double cataract surgery at the Miracle Campus. “I can see to sign my name so you can take my photo,” he said. “I can see you writing in that little book. It’s all so new.”

Eliot, age 76, is the husband of three wives, all living and all living in the same vicinity. Number three wife came with him to The Luke Commission campus during a CARES surgery session. “She is my last and youngest one,” he explained.

The first two wives reside on the family homestead. Eliot’s third wife, Mary, stays at her own home, although she visits Eliot every morning and evening “to make sure he is okay.”

Mary said of her mate, “He could not know what was happening with anything before.”

“Now I can observe what is going on in my fields,” Eliot noted, shortly after the bandages were removed from his eyes. “Today I see people’s clothing and the colors. Oh, it’s so good to see colors again.”

He had not been able to see for two years because of dense cataracts. When he came for surgery, Eliot told TLC staff: “I am not going to let this opportunity pass me by and only do one eye. Please operate on them both.”

While staying at the Miracle Campus, Eliot was wheeled around in a large wheelchair provided by TLC. A big man with a bigger laugh, Eliot said, “My legs swell. I can walk a little with crutches. But I can not move fast, and things move fast around here.”

Eliot kept tapping his heart, smiling and clapping after his eye bandages were removed the day following surgery. He could not contain his joy even an hour later.

Six months earlier, Eliot was assured at a rural TLC mobile outreach that he would receive help. “They told me to just be patient. They would call and pick me up when the special doctors came.

“I hope God gives The Luke Commission many more days to work here and to help us Emaswati,” he said repeatedly, each time in slightly different words.

Added Mary, “I will come next year and get my eyes washed.”

Mary is the mother of 7 children with Eliot; 4 are living, and 3 have died. His other 2 wives gave him 9 children, of which 2 have passed away.

In all, the jovial man who commanded the space around him wherever he sat had 18 children. When he left the Miracle Campus, Eliot took a huge piece of happiness with him, even as he noticed his own little finger…and held it up with a wave of thankfulness.