Running Scared, Running for His Life 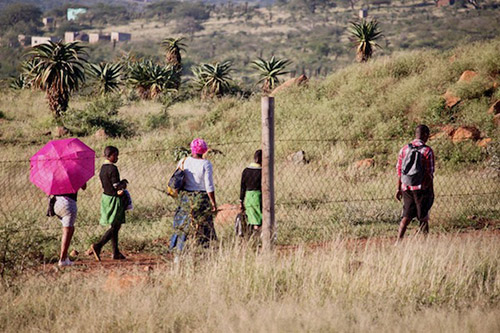 (The staff member in this piece freely invited us to share his story. We have changed his name to ensure his privacy at The Miracle Campus.)

When a staff member comes to work intoxicated, more may be behind his behavior than inappropriate drinking.

Such was the case with Saneliso (name changed), who was called by a Luke Commission counselor to talk “sister to brother.”

Noted the counselor: “He was shocked and a little shy.” When he opened up, though, a story emerged of a boy who ran scared, understandably, during most of his childhood.

“I grew up with my mother and stepfather. I used to ask my mom why I had different surname. My mom explained that my dad had passed away when I was very young, so I could not remember him.” Saneliso said.

One Friday when he was 12 years old, his mom was invited to a traditional dance by an uncle. It was to last until Sunday.

“Saturday, I watched my stepfather receive a call and start to cry. He tried to hide his crying and did not talk to me.”

Saneliso’s mother did not come home all weekend. The boy rushed to school on Monday morning, hoping to see her. She was a secretary at the school. The teachers were all talking.

“At first I could not hear them. Then a girl told me they said my mother had passed away. I could not believe the pain I felt. My mom was everything to me,” Saneliso remembered.

“After my mom was buried, I went to my mother’s parental home. I stayed there a year, but no one was willing to send me back to school,” continued Saneliso. He went to his father’s homestead, but that family “did not want to see me, thinking I was coming to get my father’s inheritance.”

Life became even more difficult for Saneliso, especially with one uncle. “Seeing they were not happy with me, I ran away to stay with the sister of my grandmother. I did not know I was putting myself into hell.”

Saneliso’s great-uncle was a traditional healer and pastor of a church. Continued Saneliso: “He sent me to fetch his goat from one of his friends. This happened many times, and I finally realized he was dealing in drugs. I was told I had to say the goat was lost, so people would not notice me. I did not like lying. I was sent back many times. I had nowhere else to go, and would not get any food if I did not do what the man told me to do.”

Saneliso started drinking alcohol “to remove the stress.” Then he ran away again. He told one policeman he was scared, since “they were coming after me because I carried their secret.”

He continued: “One night four men came asking me to go back to my grandmother’s home, but I refused. The policeman talked to them and tried to help me. When another man saw they were wanting to kill me, he tried to help, too. He got sick and died a few days later. I still wonder how he died.”

Now more scared than ever, Saneliso “ran away for my life” and went to stay with a friend. Bouncing between homes for a couple of years, Saneliso said life was not easy, because he did not have a job and his uncle was a leader in his community.

Eventually, Saneliso was hired by The Luke Commission. “But I am still afraid,” he said. “I am sorry I came to work drunk. I cannot sleep well. I always dream about the traditional healer looking at me. Or I dream about being back at his place.”

Saneliso explained that after these dreams he would “be afraid the whole day, so I would drink. Then I could sleep and not remember anything.”

TLC’s counselor thanked Saneliso for his openness, and added: “God’s grace and love have kept you alive. This means God has a purpose for your life. Alcohol is not the solution, but Jesus is.”

“Have you ever accepted Christ into your life?” asked the counselor.

“No, I never got that chance,” Saneliso answered. “I was living with a pastor, who is traditional healer on the one hand and a thief on the other hand. I never before saw the beauty of salvation. Now I do.”

After praying to accept Jesus as his own, Saneliso noted: “I have tried to rid myself of alcohol, but then I find myself drinking again. I feel like I have disappointed the Jesus you are talking about. But now I see He loves me.”

TLC’s counselor encouraged Saneliso in his resolve not to turn back to alcohol. “Please try to forgive those who have hurt you so many years,” she said. “Now The Luke Commission team will be praying for you and supporting you.”​

PS Counseling staff members, as well as patients, is crucial at The Luke Commission. So often, it’s the difference between continued bondage to a frightening past to freedom in Christ. Open our eyes, Lord, that we may see…