Listen to Their Stories! They See Today! 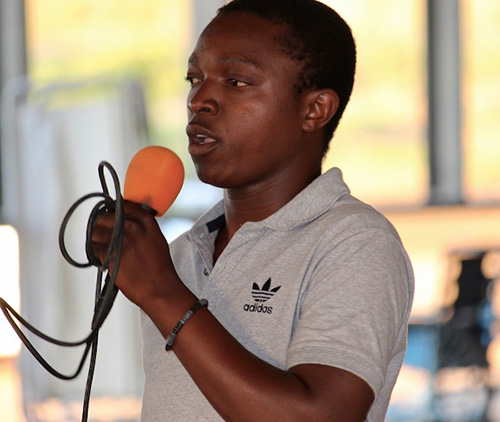 It grew dark during the first service at the Specialized Care and Surgery Centre a few months ago. It grew dark, because night set in, and the centre-under-construction was still just a shell of a building.

However, night had already set in for the 150 patients who sat listening. They were there because their eyes were dim; some were blind. The latest CARES surgery session was about to begin.

Two young men spoke to the patients and dozens of others in SiSwati, with translation into English. These two young men had stories to tell which, even with the passing of time, are hard to believe. But believe we must!

“I was sitting where you are a year ago. To make a story short, I was blind,” said Nhlakanipho Mncube.

“When you come here, you want to go back home. Stay. You will get help,” he assured the mostly elderly Emaswati in the audience.

Nhlakanipho said his eyesight became a problem in 2012. “I asked for eyeglasses like you. They didn’t work for me.”

He continued: “I couldn’t complete school because of my poor vision. I came to The Luke Commission gate, but my hope was no longer with me.

A year ago, Nhlakanipho received a brand new cornea from a donor bank in the United States. The surgery was done by a visiting surgeon and TLC’s medical team. “I am waiting for another cornea tomorrow,” he said, ever so slowly with emotion.

The audience hesitated for a second, wondering if they had heard correctly, and then clapped with cheered and glee.

“I will join you tomorrow to go back and get two eyes. But I can see you all tonight with my one eye,” he said. “Last year when I sat where you are sitting, I started crying. I was so afraid. Then my turn came the next day to go into theater.”

The young man sympathized with the patients who had come long distances from their rural homesteads into a large “homestead” called the Miracle Campus.

“Do you believe that you will get help? It’s very important to have faith,” he said. “I’m coming to give you courage. I’m wearing a red shirt now, but I am a patient like you.”

“I had no hope and no place to get hired. But here I am working today at The Luke Commission,” he laughed.

Next, it was Ndumiso Fakudze’s turn. He was young also, 23 years.

Ndumiso came to the Miracle Campus as a caregiver. “I had already been everywhere in Eswatini and told there was no help for my eyes. At the last minute as I registered my sister, I thought: ‘Lord, what can they do for me if I register?’”

He continued: “Everyone thought I was being playful when I told them I was blind. But when they tested me, they realized my sight was very small.

“I waited, as you are waiting. TLC told me something others had not. They told me there was hope.”

Looking over his audience with gentle compassion to explain cataract surgery, Ndumiso added: “Fear always comes before the theater. But do not fear. What lots of people say is not true.”

Ndumiso explained that he came on September 26, 2015, and took the surgery patch off on September 28. “My eye was not believing what I was seeing. I could see mountains and the sun! Before, I could only see a few of you in the front row.”

Speaking with passion, Ndumiso said, “I’m coming to say be strong and have courage. People always want you to fear. They don’t know the truth.”

The following year, his second eye was treated. “Now my eyes are clear, and I can see everything.”

Echo VanderWal, co-executive director, added: “These two were patients. Now they are part of the TLC family, who are serving you.

“Here on earth nothing is 100%. Still, we saw miracles in their lives. We are praying for miracles this week, too. We recognize that some miracles come on earth, and some miracles we have to wait to get to heaven to see,” Echo said.

“You are sitting in what will be The Luke Commission hospital that God is helping us build. This is the first service we have had here. You are welcome to our home, and we look forward to spending this week with you.”

He added, “It’s not just about seeing physically, since we are just passing through headed to heaven. But as we receive physical sight, may our spiritual eyes be opened.”

Patients started the service with dancing and singing. Gathering quietly for individual prayers and blessings ended the service. It was a night of expectant reverence and, yes, hope.

(by Janet Tuinstra for the team)