Five Years Can Be a Full Lifetime—Emphasis on Full 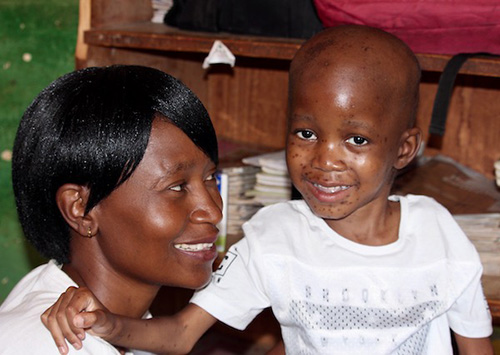 He grimaces when his mother lifts him from lying down to sitting up. But the painful expression quickly becomes a grin. A beam of victory to those of us who watch and ask his story.

Fisokwethu is five years old and has an incurable brain tumor. His mother, Zanele, brought her son to a Luke Commission outreach, requesting a wheelchair. Until recently, Zanele carried her son on her back. Then she switched to holding him in front to cushion him from the jolts of her steps.

While waiting for The Luke Commission staff members to assemble the Free Wheelchair Mission chair, Zanele lay her son on a school desk in the back for the room where TLC doctors were treating patients.

“I’d like something so he can sit with more comfort, and we can push him slowly,” Zanele explained. She lives with her mother and father and a daughter, age 12.

The little boy’s father died in 2015, when he was a baby. Until two years ago, Fisokwethu was a healthy child.

“I hoped he would grow up and be a doctor, but God will help me and never let me down,” Zanele sighed quietly.

Fisokwethu started having severe headaches, which led to the brain tumor diagnosis. Zanele took a leave from her job as supervisor at a security company.

When her leave became an involuntary permanent leave, Zanele received help from the Liswati government to take her child to South Africa for radiation and removal of a “little tumor too close to his brain.”

That was in September 2018. She returned to Eswatini with her son in February 2019, learning that Fisokwethu would now be “in palliative care with no further curative treatment.” His only medication is Panado, another name for acetaminophen or Tylenol.

She talked in English while her son listened and seemed to understand: “The doctors told me last March that Fisokwethu would not live six months. I said they are not the gods of my baby. Jesus is the God of my baby, and he will be with God and stay with God when He says so.”

The little boy demonstrated faith that speaks mountains. He nodded his head, though it obviously hurt, when asked if he knew Jesus loved him dearly. “He used to sing about Jesus,” his mom added.

“He’s the only guy in my life, and I love him,” smiled Zanele. “His sister loves him too much and always wants to be close to him.”

While she and her children live on the same homestead as her parents, obtaining other necessities of life are difficult. “The headmaster of the school is the wife of my brother,” she answered. “They help and so do other relatives. But my father and mother are too old to work.”

As is often the way, Zanele let her voice trail off without explaining the particulars of receiving daily food, clothing, and basic living provisions.

For this day, however, she and Fisokwethu were more than thankful for a new chair and another day together.

by Janet Tuinstra, who continues to learn at the feet of Jesus’ children